If you’re in the market for top-of-the-line, science-backed, fully-transparent supplements, look no further than Kaged Muscle. The team, led by CEO and founder Kris Gethin, have been one of the leaders in the fitness industry for quite some time. 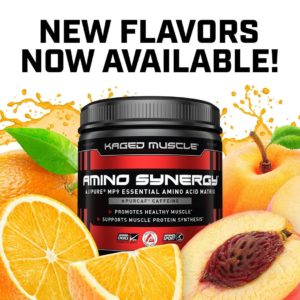 New flavors are in, and they’re unreal — Peach Tea and Orange!

Kris began by launching a variety of workout programs, trainers, and guides, but has now ventured into formulating his own supplements. For awhile, Kaged Muscle offered some outstanding products (Pre-Kaged is still one of our favorite pre-workouts!), albeit in a smaller variety than some other brands.

Recently though, Kaged Muscle has turned it up a notch, hitting us with a non-stop flow of new, incredibly formulated products. Among them, Amino Synergy stands out strong, with its emphasis on the natural. While it’s a poorly-kept secret how much we love full EAA formulas here at PricePlow, Kaged Muscle takes it another level with natural flavoring and using stevia alongside, with as little sucralose as possible. Combining a great formula with a downright insane flavoring system in these two new flavors, Kris and his team have done it again.

Peach Tea and Orange Amino Synergy in the KM house

Read on for a quick breakdown of the label along with our thoughts on these absurd new flavors – Peach Tea and Orange! But before we get to that, make sure you check out PricePlow and sign up for our KM alerts in order to get some of the finest supplement deals out there!

If you know anything about Kris and Kaged Muscle, then you know just how much time, research, and resources are put into each of their supplements. We’ve discussed much of the story with their formulator, Brian Rand. No matter which product you’re looking at, you’re getting the same thing – the highest-quality, highly-effective, cleanest ingredients available. 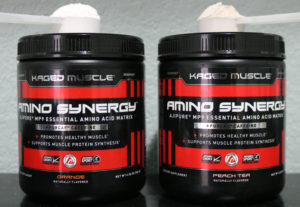 The Orange flavor is great, but the Peach Tea flavor is astounding. There seems to be a bit of vanilla in there or something, it’s just fantastic!

Amino Synergy is no different. Kaged Muscle uses high-quality fermented and vegan-sourced amino acids,[1] not the animal by-product derived aminos some other companies use. Kaged Aminos are also both gluten-free and kosher, making them a perfect supplement for virtually anyone interested in EAA products.

In addition to an effective dose of the essential aminos, Kaged provides a bit extra hydration – a worthy complement for an intra-workout/recovery supplement like this. Kris is extremely active, and is someone who has ventured into many different areas of fitness – he’s trained both for bodybuilding and for triathlons! If anyone knows the benefit staying hydrated can have on your performance, it’s him. When it comes to Kaged Muscle products, you can bet that you’ll be getting a comprehensive supplement that helps you out in more than one way!

Kaged Muscle flavoring system – one of the best in the business!

We’ve talked ad nauseam about how well Kaged Muscle flavors their products (check out Mike rave about his favorite chocolate isolate on the market – Micropure Whey Protein Isolate Review), but they’ve exceed expectations with this one. Amino Synergy was launched in a fantastic raspberry lemonade, but these two new flavors are unbelievable. Check out Mike’s video review of these two flavors – Peach Tea and Orange, which will be shared up above in this blog post. 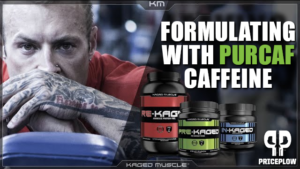 Why does Kaged Muscle only use PurCaf caffeine? Outside of it being naturally-derived, there may be some fringe benefits to keeping caffeine with its natural counterparts.

Long story short — orange is very good even for a non-citrus guy, but Peach Tea is downright phenomenal!! Both of these flavors seem to have a dash of vanilla in there or something, which is a perfect touch.

As we mentioned, methionine can make EAA supplements extremely difficult to flavor. While the industry has gotten much better, Kaged seems to be leading the pack. Not only that, but they’re doing it with non-GMO ingredients – using only stevia and a dash of sucralose!

The following is an up-to-date list of all Amino Synergy flavors PricePlow has in stock:

Team Kaged Muscle is growing, too! 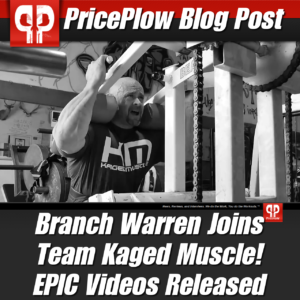 We can’t wait to see the workout plan that comes out of this partnership!

While Kaged Muscle stays focused on growing their product line, they’re not neglecting other parts of the brand! They’ve recently added Branch Warren to Team KM, and the two are very excited to begin working together. While we don’t know what Branch and KM have in store for us, we do know one thing: some insane workout content is likely on its way! Check out our recent post about Branch joining Team KM!

It’s one thing to be an industry leader, but continuing to raise the bar once you’re at the top is incredibly impressive. Kaged Muscle continues to beat expectations, with each new product or new flavoring seemingly being better than the last. These new Peach Tea and Orange flavors are incredible, and they make the effective Amino Synergy even more enjoyable to drink. In the quest to build muscle and stay fit, sometimes we have to sacrifice taste for results. Kaged Muscle seems to both questioning that methodology. Their products constantly remind us that results and enjoyment aren’t mutually exclusive – you can have both!