Want to know Mark Glazier’s favorite flavor of NutraBio’s 100% Whey Protein Isolate?! It’s right here — their newest flavor, and we got the inside scoop from Michael Perez, the brand’s insanely skilled flavorist: 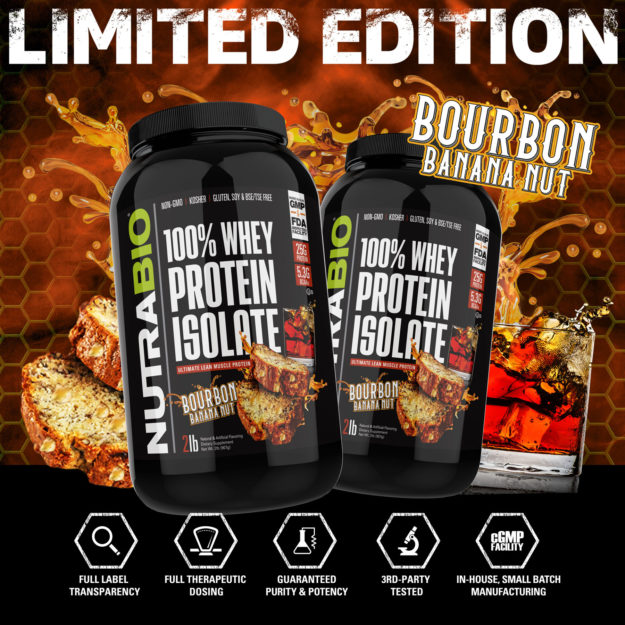 Talk of the town… Mark Glazier claims that this is the best flavor NutraBio’s ever put out!

This limited edition flavor has quite the backstory to it, and is said to be unlike any protein powder you’ve ever had. NutraBio has stirred the entire industry up on a weekly basis, and this week is no different. The protein revamp started with the Strawberry Ice Cream 100% Whey Isolate, but things really got serious when they announced their Breakfast Series Whey Isolates, of which Pancakes & Maple Syrup is our favorite flavor ever.

Mark Glazier says this one is even better. Check it out below (it will be highlighted in yellow if it’s in stock), and sign up for NutraBio alerts because this brand is non-stop. And then we get into the story behind the flavor: 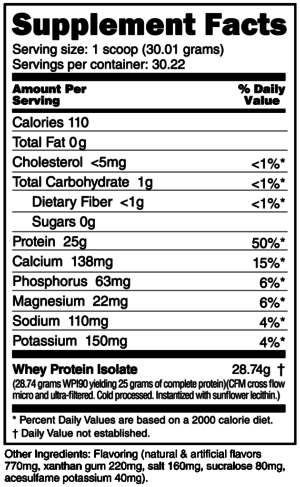 Just one carb and it’s partially fiber… how does Mike get all that flavor into such clean macros?!

NutraBio had already discontinued their former Banana Whey Protein Isolate flavor. It was OK, but banana is finicky and most customers don’t want just a straight flavor at this point, with so much interesting competition nowadays. In general, there’s not many great banana flavored proteins on the market. They’re either too strong, too weak, or simply too fake.

So it was on the slate to do something better at NutraBio.

Inspiration from two unlikely places: a baker and a Christmas Party

NutraBio is fortunate to have an executive assistant who is also a very good baker. Knowing this, Michael chartered her to bake her famous banana nut bread, which she brought in. That was the start, with some notes of banana, some buttery flavor, and walnuts. While working on the flavor, the team keeps some of that bread in the fridge to reference from. 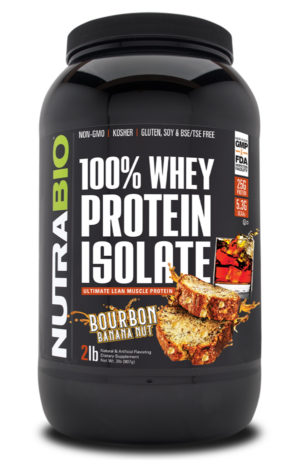 Who would have known the bourbon at the Christmas party would have inspired this wild new flavor of whey isolate?!

The issue is that Michael didn’t want the banana to be too strong, but at the same time, you can’t let the walnut to overpower the banana either. It’s a bit tough to balance out, so it takes a lot of time, testing, and refining.

Enter the Bourbon at the Christmas party

The flavor had a good start, but inspiration really struck at NutraBio’s annual Christmas Party in late 2018. Michael had some bourbon at the Christmas party, and was semi-embarrassed to say that it was his first time ever having bourbon. Not because a man should know every alcohol in the world, but because a flavorist should know as many flavors of the world as possible.

He thought that bourbon was something special — being corn-based, it’s sweeter than regular whiskey. But more importantly, it had some caramel notes along with some vanilla… you could almost get that eggnog feeling just a touch from it.

Michael just had to use this bit of flavor in the new banana nut whey isolate! He started tinkering with added flavors, and eventually came up with something spectacular. 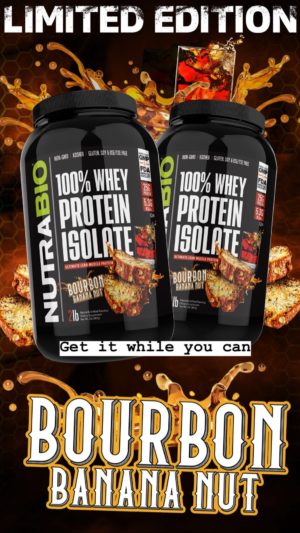 Get it while you can, it’s limited edition!

The bourbon hits first, and this is likely going to be quite the surprise to everyone, since there’s nothing like this on the market.

After that comes the banana, but it’s a buttery banana. Note that there’s no real butter added — this is still a zero fat protein powder — but it’s from a dash of butter style flavoring. The banana has the longest-lasting effect.

Then finally, at the end, you’ll get the notes of nut, mostly from walnut. It’s not too strong though, as you don’t want so much nut that it’s like a peanut butter cup.

To work through the entire ride and help carry the bourbon into the banana, Michael stole a dash of the caramel/syrupy flavor from the Pancakes & Maple Syrup flavor, and this helps pull everything together.

After talking to Mark and Mike, both of whom are clearly extremely proud of this flavor, anticipation has never been higher! On top of signing up for NutraBio’s news alerts on PricePlow and reading more about NutraBio 100% Whey Protein Isolate, you can check out the deals below, which is a limited edition flavor — unless it sells as well as it should, then maybe it’ll become a permanent one!