Glutathione Enhances Gains from L-Citrulline?! Not so fast, Setria.. 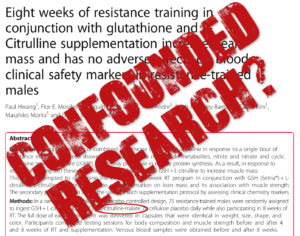 We’re getting tons of emails from trade magazines about this study, so we decided to look into it. But what we found did not exactly meet expectations.

Glutathione is an important and powerful antioxidant used to prevent oxidative stress and damage to cells in everything from winemaking to skincare products. Too much oxidative stress, caused by free radicals in the bloodstream, is linked to heart disease, Alzheimer’s Disease,[1] Parkinson’s Disease,[2] chronic fatigue, depression, and more. Since exercise can also temporarily increase oxidative stress[3] — contributing to soreness and fatigue — athletes should also be interested in preventing its prolonged release.

Glutathione isn’t orally bioavailable – is there a better “carrier”?

Some are hoping that to change soon, due to a new “performance blend” of glutathione and L-Citrulline manufactured by Kyowa Hakko, makers of Cognizin citicoline and Sustamine L-Glutamine. A new study suggests it may have additional benefits for athletes.

But unfortunately, upon closer look, we have some serious concerns with the way this study was configured.

At time of press, Baylor’s researchers did not respond to our writing team’s request for comment.

The double-blind study, conducted at Baylor University with funding from Kyowa Hakko,[5] suggested that a blend of glutathione and L-citrulline, marketed under the name Setria Performance Blend, may increase lean body mass – but only temporarily!

75 male participants were given either 2.2g Setria Performance Blend, 2g L-citrulline-malate, or 2.52g placebo for eight weeks of resistance training, then measured for changes in lean mass and 1RM (one rep max) on the bench and leg press. (HINT! Read the last sentence again. Can you find the confound?) The researchers hypothesized that the glutathione would help prevent oxidative stress while synergizing with the ergogenic effects of the l-citrulline. This would allow it to stay in the bloodstream longer for increased nitric oxide uptake into the muscles, which would in turn lead to an increase in strength and lean body mass via more efficient muscle protein synthesis. 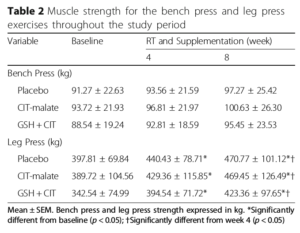 There were no statistically significant strength increases on bench press, while all were significantly increased in leg press — but not significantly different from each other.

After four weeks, the researchers reported an increase in muscle mass and bench press and leg press strength for all three groups. The researchers went on to note that the most significant difference in strength and lean mass was in the group supplementing with Setria Performance Blend – a greater increase in strength and lean body mass than either the group receiving the placebo or the group receiving citrulline malate alone.

…but things even out after another 4

The researchers speculated that the increased lean body mass was due to more efficient muscle protein synthesis from the less-degraded l-citrulline in the bloodstream. The benefits of l-citrulline are well-documented.

So many questions here. Why did things get worse in the second four weeks for the Setria group? Why did the placebo group lose lean mass? Were they “over-reaching” or “under eating” as the researchers hypothesize, or was this just a poorly run resistance training study?

The confound: a lower dose of citrulline malate?!

However, different forms of l-citrulline were used between the groups, so it’s tough to say for sure how the glutathione made a difference! Realize that citrulline malate contains roughly 56.6% citrulline, so we’re really comparing 2.2g Setria (consisting of 200mg glutathione + 2g L-citrulline) against 1.13g citrulline (the rest being malic acid).

Why not compare apples against apples? Why use citrulline malate, which yields a lower dose of citrulline? This alone obfuscates anything you can hope to gleam from the study.

Instead, the researchers were also unsure why the gap closed after an additional four weeks of study, but offered the explanations that the different groups may not have been eating enough to get the full benefit of their training, or, conversely, had overtrained.

Further drawbacks of this study

Beyond the citrulline malate confound, remember that Kyowa Hakko funded the study, and one of their employees also designed the experiment, performed the statistical analysis, and assisted in the preparation of the manuscript!

So the company funding the study,with a material interest in the study, also had an employee do the math and help write the manuscript.

Meanwhile, the data doesn’t really back up the conclusions nor the headlines in other trade magazines – the correlations really aren’t that strong between the different groups and its rather sporadic.

The fact that the lean body mass decreased from four to eight weeks in the Setria and placebo groups suggests bad experimental design (the researchers hypothesized “eating less” and “over-reaching”) — these variables should be better accounted for in a proper study.

Meanwhile, nothing interesting happened in the strength category — nobody had statistically significant gains in bench press, and everyone had similar increases in leg press that were not significantly different from each other.

Overall, there are just too many red flags here to take this study seriously. 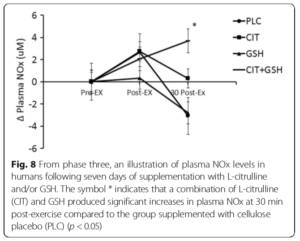 All things considered, this leads us to wonder if this whole glutathione + citrulline idea is simply just a dead end when it comes to actual human performance. In theory, it’s good. In rats, it’s good. In reality, nothing noticeably interesting really seems to be happening.

Why not just take NAC?

Alternatively, you could take a large quantity of N-Acetyl Cysteine (NAC), a precursor to glutathione that helps your body produce more.[7] It turns out that NAC supplementation enhances muscle cysteine and glutathione levels and prevents fatigue during endurance training in athletes,[8] which may seem like a more bioavailable solution in the first place. 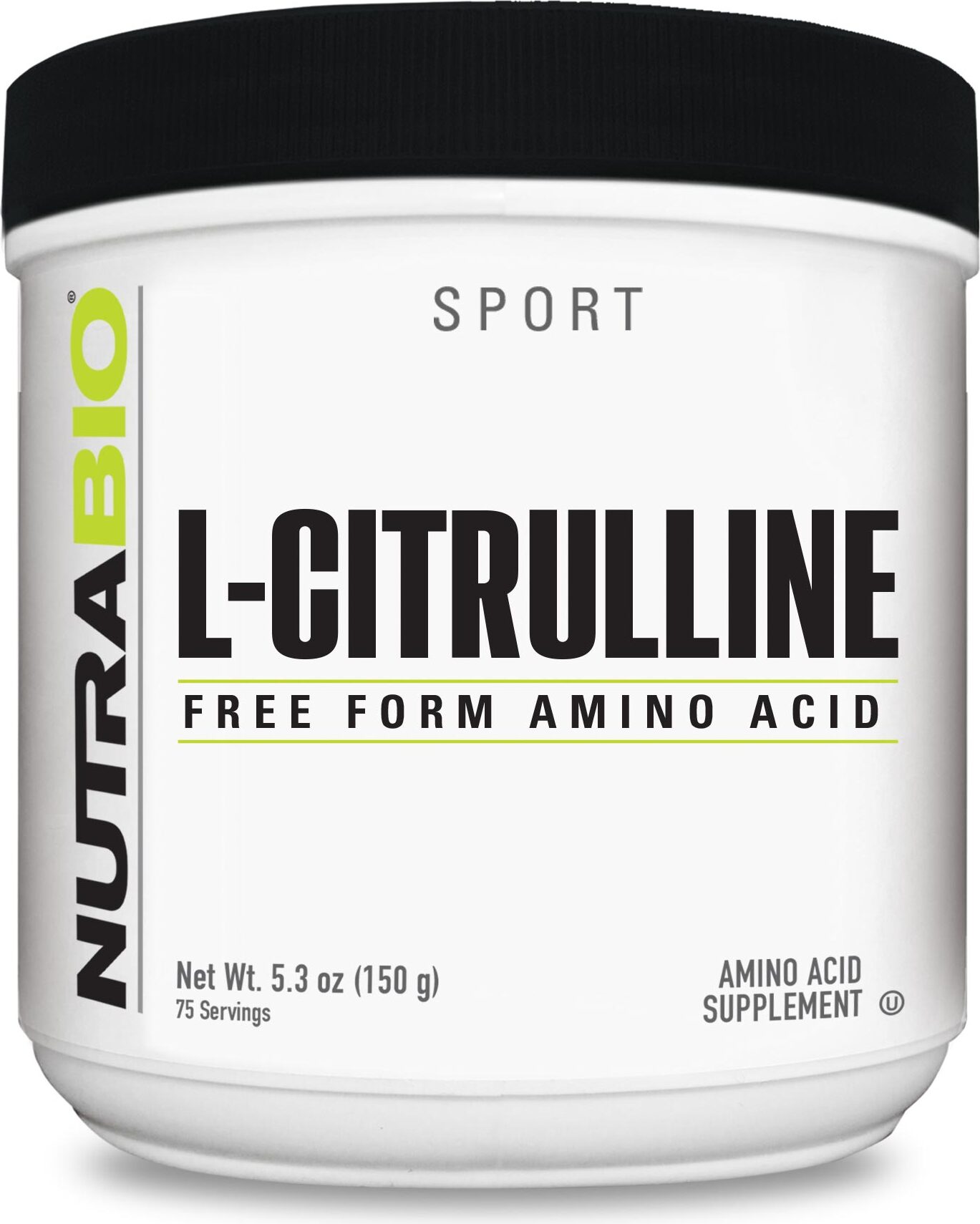 If nothing else, we learned once again that L-Citrulline is great for nitric oxide production and possibly lean mass. But next time we need to compare apples to apples.

However, NAC has its own limitations, which is why glutathione supplementation is still being explored. Not only does NAC alone not appear to help muscle protein synthesis or nitric oxide metabolism like Setria Performance Blend was hoped to, some studies also suggest that NAC may inhibit the body’s nitric oxide production by interfering with the absorption of nitrite in the kidneys![9] Finding an appropriate “carrier” for glutathione could still have benefits, but due to the confounds in this study, we cannot yet be sure that citrulline is that molecule.

More — and better — research is required

Clearly more research is needed, but the implications of an orally bioavailable version are exciting and we hope someone can nail it someday soon. However, the citrulline / citrulline malate confound makes this study practically useless, even for those who are looking for a solid four weeks of “beginner gains” per the headlines.

No doubt, Setria can be useful because L-citrulline is useful, but is this glutathione really doing anything? We just don’t know until there’s a true 1:1 comparison and less conflicted research.

Until then, we are not impressed.