Posted on December 10, 2022 by PricePlow Staff | No Comments

roSince Raw Nutrition‘s awesome partnership with Chris Bumstead, we haven’t had many chances to write about Raw’s pre-Chris products. While Chris has brought a level of pure mass and energy to Raw’s newer lines, we also love to appreciate their older hits, like the much tamer, smoother pre-workout: Raw Nutrition RAW PRE. 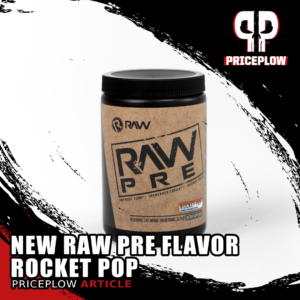 RAW Pre is a low-stimulant pre-workout formula, and it is a welcome counterbalance to RAW’s other, more intense pre-workouts: Raw Pre Extreme and CBum Thavage Pre-Workout.

Luckily, we get to write about RAW Pre again today because it has just been released in a new, oh-so-patriotic Rocket Pop flavor.

Most pre-workouts are hitting the market these days, including the other ones Raw has been putting out, so juiced up with stimulants that one may say they are traditional pre-workouts on juice. And don’t get us wrong, many people love them. We love them. There’s no better way to lift some people to Valhalla than slamming down some 400 milligram caffeine pre-workout like the gym-bro version of Tony Montana.

But that’s not what RAW Pre is, and we think that’s a good thing. There are times when we don’t want to be bouncing off walls or throw a wrench in our circadian rhythms. Sometimes, we just want a little boost for that after-work gym session before we go home and go to bed. 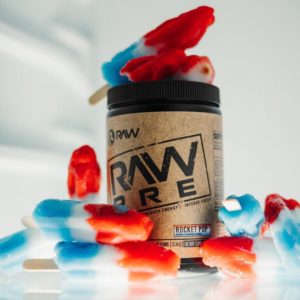 RAW Pre was one of the first six supplements launched by Raw Nutrition, and it takes a very conservative approach to stimulants, boasting only 100 milligrams of caffeine. As far as the other main purpose of pre-workouts goes – pumps – RAW Pre has that nailed down.

So if you want an excellent pump with only a bit more stimulation than stim-free pre-workouts? RAW Pre is perfect for you.

We’re going to dive into a little summary on how RAW PRE works, but first, let’s check the PricePlow for good Raw deals, and check out our video review of the new flavor:

Rocket Pops – that classic frozen treat. It calls to mind warm summer days, skating down to the park with your friends, and sweating all day before cooling off with a red, white and blue popsicle. It is, of course, Americana. And while winter may be here, there’s no reason we can’t channel the esoteric, mythic energy of the rocket pop to fuel us for our workouts.

The flavor is typically described as a combination of cherry, lemon-lime, and blue raspberry – a pretty darn good combo for a pre-workout. You have some sweetness, some tartness, and a lot of nostalgia. What could be better?

RAW PRE – How It Works 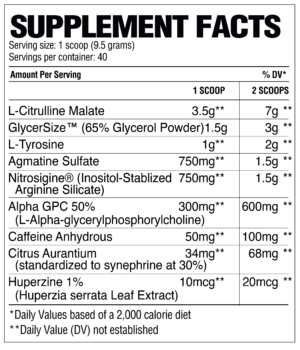 For a more in-depth view on the ingredients, check out our main Raw PRE article. Here’s a summary of what you get in a full two-scoop serving (leaving 20 servings per tub):

RAW Pre has a number of other flavors. Check them out: 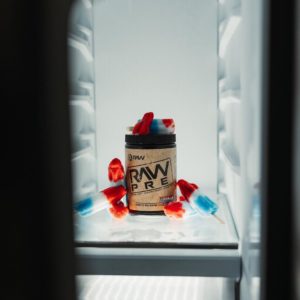 400mg+ caffeine pre-workouts are all the rage. The industry is stim-maxxing, you might say. But in a world of supplemental extremism, Raw Nutrition continues to remind us with one of its flagship products that we don’t need to be extreme all the time.

There are times when we just want a little boost and a great pump. That’s when RAW Pre really shines. And it shines even brighter when you marry it to an awesome, iconic, and refreshing flavor like Rocket Pop.