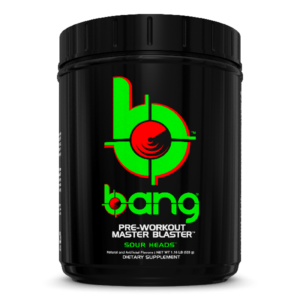 VPX Sports Bang Master Blaster pre workout is a pre workout that will significantly enhance your athletic performance proven in a new study.

VPX Sports is known around the industry as one of the leaders in high energy products, headlined by none other than Bang, their incredibly popular energy drink sold far and wide.

If you’re a subscriber to our YouTube channel, you’ll know that we’re all huge fans of all things VPX, especially the Bang franchise!

The brand isn’t just about energy drinks though, they actually have a pretty well-dosed pre workout supplement in Bang Master Blaster. Despite the Bang name, this is a pre workout powder, not a ready-to-drink bottle.

As we’re all aware, supplement companies love to make claims as to how their particular products enhance athletic performance in the gym or the field of competition, but few rarely have the research to back it up.

So VPX decided to put their money where their mouth is and submit Bang Master Blaster to the ultimate test — a double-blind, placebo-controlled crossover study using humans, not rats or isolated cells in test tubes, real athletes!

The study details are up next, but first let’s get our Master Blaster prices, deals, and coupons up so you know how much this will cost you: 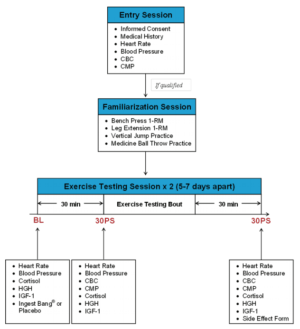 Here’s a flowchart showing the progression subjects in the study went through.[1]

Researchers from the University of South Alabama recruited 10 resistance-trained men to participate in a placebo controlled, double-blind, crossover study to determine the effects of acute oral ingestion of a placebo or VPX Bang Pre-Workout Master Blaster on the following:

Subjects reported to the lab for testing / training on four occasions:

1RM for bench and leg press were assessed as well as vertical jump, seated medicine ball throw, and endurance tests (bench press and leg extensions at 70% of 1-RM to fatigue) were performed.

Prior to each exercise session, athletes abstain from any form of exercise for 48 hours and fasted for 8 hours (except from water) immediately before the testing session. Participants then had their BP, resting heart rate, and blood drawn for baseline measurement. Following this, the men consumed either one serving of Bang or placebo. 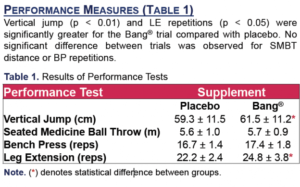 After a 30 minute rest, blood pressure, resting heart rate, and blood samples again were drawn to track any changes induced by consuming the supplement or placebo (30-min Post Supplement; 30PS). Participants then performed the vertical jump test and had their highest jump recorded. Up next was the Seated Medicine Ball Throw and each subject’s greatest distance throw was recorded. Finally, athletes moved onto the bench press and leg extension endurance tests, where the number of successful repetitions before muscular failure was recorded.

Following completion of the exercises, the men rested for 30 minutes and had their heart rate, blood pressure, and blood drawn again (30-min Post Exercise; 30PX). For the second exercise session, each athlete performed the exact same protocol without consumption of Bang Master Blaster or Placebo.

There was no significant statistical difference between bench press or seated med ball throw though. 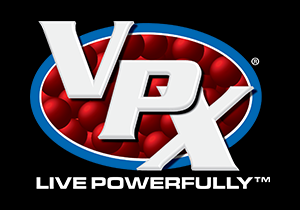 We support brands that put out double-blinded research! Click the image to compare prices on VPX Sports supplements.

So, what does this mean?

Pre workouts (or at least well-dosed ones like VPX Bang Master Blaster) can significantly enhance your performance in the gym and pave the way to bigger and better gains. This was of course a one-off use of VPX Bang Master Blaster, so the next step from here is to see athlete’s progress running an entire container of the product and assess changes over the course of an entire month’s worth of training sessions.

Once again, Team VPX comes through with some interesting stuff. Support companies who actually put research out there by buying the Bang Energy Drink on PricePlow or compare the Master Blaster prices below!