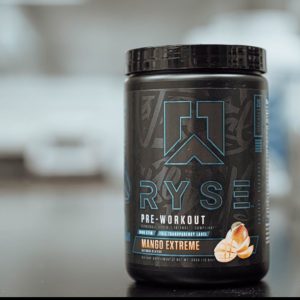 Blackout Pre-Workout has refreshing flavors and even better performance!

In 2019, Ryse Supps introduced Project: Blackout, a new line of supplements designed for consumers with years of training under their belt. Project: Blackout launched with two fully-loaded pre-workouts:

A year later, Ryse launched Project: Blackout RTD Pre-Workout, a ready-to-drink pre-workout with a fully-disclosed label, strength and power matrix, and energy and focus matrix. It’s available in three refreshing flavors. With 400 milligrams of caffeine, 8 grams of citrulline malate, 3.2 grams of beta-alanine, plus other ingredients, Project Blackout RTD is one of the most well-formulated, ready-to-drink pre-workouts on the market.

While the RTD instantly became a massive hit, Ryse had another supplement up their sleeve that they couldn’t wait to release, Project: Blackout Pump Capsules! This is the fourth installment in the Project: Blackout series as Ryse continues to expand and diversify the line.

Ryse Pump Capsules rely on a combination of betaine nitrate (as NO3-T) and glycerol to promote vasodilation (expansion) of the blood vessels. The result is greater pumps, vascularity, and performance because more nutrients, oxygen, and blood flow to working muscles. Furthermore, metabolic waste products will be shuttled away from muscles more efficiently, allowing you to obtain peak performance for a longer period of time. 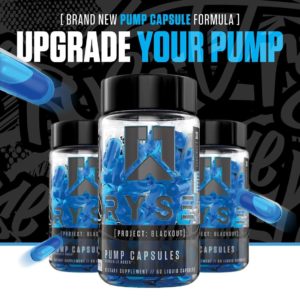 Upgrade your pumps and performance!

Liquid capsules are known for optimizing ingredient absorption and bioavailability; and Ryse is one of the few brands that use them. Ryse Pump Capsules are caffeine-free, so you can take them any time of day and not worry about disrupting your sleep. And while Ryse Pump Capsules are great on their own, you can stack them with other pre-workouts, such as Ryse Core Pre-Workout or Ryse RTD Pre-Workout.

Since this supplement contains nitrates, be sure to check the label on any pre-workout you want to take alongside it. Doubling your nitrate intake could cause low blood pressure, which could be dangerous! For example, Ryse Blackout Pump is loaded with nitrates, so there’s no need to add more! But for the most part, a majority of pre-workouts don’t contain nitrates.

Keep reading to learn more about the ingredients in Ryse Pump Capsules and sign up for Ryse news and deal alerts so you can receive notifications about new supplements, flavors, and sales!

Each bottle of Ryse Pump Capsules comes with 60 liquid capsules (30 servings per container). For optimal results, Ryse suggests taking two capsules 15 to 30 minutes before training. One thing that we appreciate about this company is that they always use fully transparent labels, so you know exactly how much of each ingredient is in the product.

Here’s what one serving of Ryse Pump Capsules provides:

Elevate Your Physique and Performance with Ryse

Since 2017, Ryse has been “fueling greatness” by developing premium supplements that help people reach their goals and true potential. The company didn’t become successful overnight, instead they grew organically, slowly, and built a thriving community. 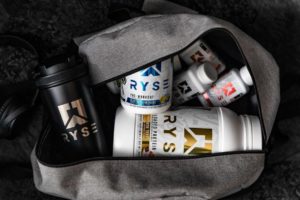 Fuel your greatness with Ryse Supps.

When you purchase a supplement from Ryse, you can rest assured that the quality is unmatched. Instead of rushing to put out a new supplement, Ryse spends months testing each product so they’re confident that loyal customers are getting something that will surpass their expectations.

Ryse has set their standards high since the beginning, and it’s really paying off for them now. The Project Blackout series is quite impressive, but Ryse has much larger plans for the future, such as even more product innovation. Each day, Ryse sets out to improve and grow, which is why, in just three years, they’ve become one of the most influential brands in the industry.

Subscribe below to stay up to date with the latest Ryse news, reviews, interviews, and deals.