Last time Ryse Supps made an appearance on the blog, we covered the flagship product, known as Blackout Pre, of their latest series – Project BLACKOUT. If you’re familiar with Ryse, then you’re used to seeing white tubs with gold, and silver labels that really stand out. With Project Blackout, Ryse created a separate line of supplements designed for the more “advanced” consumer, with darker, more “intense” labels.

After covering Blackout Pre’s formula on the blog and testing it out in the gym, we knew Ryse was ready to take things to the next level. Ever since Blackout Pre and Blackout Pump were released, their customers were hungry for more – and now they’ll get it. After many months, several rounds of samples, and countless phone calls, Ryse finally released the next product in Project Blackout – the Ryse RTD Pre Workout!

The ready to drink (RTD) category has exploded in the supplement industry and many brands are taking a stab at formulating an RTD. If you walk into your local supplement shop, RTDs and functional foods, such as protein bars and snacks, are starting to take over. 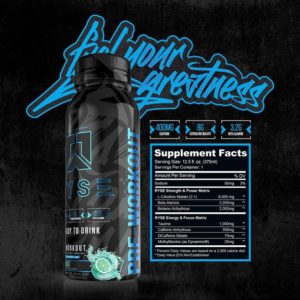 Experience the power of clinically studied ingredients at efficacious dosages!

The convenience of having a drink pre-mixed and sitting in an ice cold fridge is very appealing for many. RTDs consist of a wide variety of products, and the majority of them in the sports supplement industry are protein shakes or simply low calorie energy drinks – not pre workouts!

After all, there’s a lot more to a pre workout then just caffeine and some B-vitamins. Even though more “pre workout” specific RTDs are entering the market, only a handful of them are actually well-dosed. Seeing this huge industry gap, Ryse decided to fill it with their own fully loaded Blackout RTD Pre Workout. Ryse claims that it sets a new standard for RTD pre workouts and the label speaks for itself.

Get ready, because we’re about to cover Blackout RTD Pre Workout’s complete formula. But before we do, make sure to subscribe down below so you don’t have to pay full price on any product from Ryse Supps!

Ryse Supps developed a ready-to-drink pre workout that would actually deliver the same rush of energy, power, and strength as the leading pre workout powders on the market. They included clinically studied dosages of ingredients that have stood the test of time, such as L-citrulline malate, beta-alanine, betaine, and caffeine.

Not to mention, Ryse Supps also threw in a more “new school” stimulant known as Dynamine. With a fully transparent label, you can be confident in what you’re consuming. This is definitely not a “glorified energy drink” like the competition! Get ready to experience the future of RTD pre workouts with Ryse Supps leading the way.

Typically when a brand launches a new product, they start out with one flavor, but not Ryse! Nic Stello, Ryse Supps CEO, went all out with the initial release of three delicious looking flavors, including their signature flavor, Tiger’s Blood.

You can also find Tiger’s Blood in Ryse Supps Blackout Pre, which has been getting rave reviews. Ryse understands that in order to be a top contender in the RTD category, their flavors must be outstanding, so we’re confident that they are going to deliver!

Finally, a fully-fledged pre workout RTD with some “bonus” stuff as well! This one must have taken a while to create. 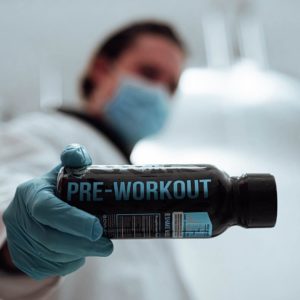 Ryse Supps made sure RTD Pre Workout’s formula would outshine any competitor.

Ryse Supps was created to “fuel your greatness”, and with their new Blackout RTD Pre Workout, they’re definitely delivering on that promise. This is by far one of the most well dosed RTD pre workouts we’ve come across. It has solid dosages of all clinically proven ingredients that will ensure you have an outstanding training session.

It may have taken more time then Ryse Supps would have liked to bring this new product to market, but needless to say, it was well worth the time, effort, money, and the wait. Ryse Supps set the bar high with the release of Project Blackout, so they knew this RTD had to live up to its standards. It’s crazy to think that Ryse Supps hasn’t been around for very long, however they are quickly becoming a very influential brand in the supplement industry.

And if you’re still cool with the powders, then check out our article on Ryse Supps Blackout Pre Workout, even more of a monster!

2020 has been a big year for Ryse, so far they’ve launched two pre workouts, a protein bar, fully loaded RTD, new flavors of various products, and have a lot more planned. Despite all the setbacks and obstacles that try to get in their way, Ryse Supps continues to climb the ladder of success. Subscribe down below so you don’t miss out on what Ryse has coming for the rest of the year!