Posted on September 7, 2018 by Mike Roberto | No Comments

You know that guy at the gym who has long, epic workouts with nearly equally epic rest periods? The one who crushes a ton of volume over the long course of time, and has the size and strength to back it up?

We know guys like this, and we recently learned that they’re actually right:

A recent study published by Brad Schoenfeld showed that longer inter-set rest periods (of three minutes) enhanced strength and size compared to those who waited one minute[1] — likely due to their ability to lift more on the next set, and increase overall volume thanks to that extra rest.

Workhorse? Then meet the WORKHORSE: 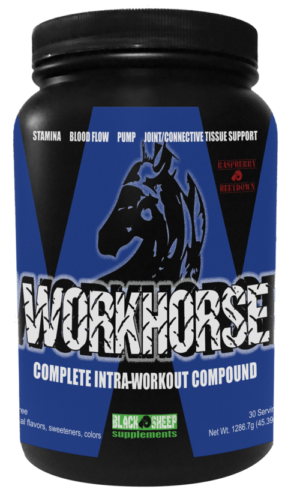 Are you a WORKHORSE? Then we have a supplement for you…

We also learned that there is a supplement meant for just these types of lifters, and it was so unique that we had to do a double-take to understand what it was really doing.

Its name is WORKHORSE, and its made by a company named Black Sheep Supplements.

Workhorse is a product is a hybrid supplement, in a product category that we didn’t even know existed! What’s the category, you ask? Well, let’s call it a “pre-intra workout” or a “post-pre workout.”

This isn’t for everyone, but if you’re going through one of those three hour workouts with the now-research-backed three-minute rest periods, then get ready to meet the supplement you take some time between hours one and two.

Let’s give you some insight into Black Sheep before breaking down this polarizing product, but for those of you who just want to see the supplement, check it out first:

Who Is Black Sheep Supplements?

Dylan Burns is an amateur bodybuilder who goes on epic training sessions. The market lacked a few supplements that he felt he needed, and believes he created something superior to what was on the market.

Founded by Dylan Burns, Black Sheep Supplements is one very unique brand. You’ll see why in this post.

Dylan began designing his own supplements after being worn out from contest prep and frustrated with an industry he believed was “flooded with hype, artificial flavors, colors, sweeteners and under-dosing.” No arguments there! Dylan decided to start mixing his custom formulation for his contest preparation, and stumbled on a few very original ideas.

Black Sheep’s mission is to create clean and well dosed supplements with no artificial or fake flavors for those who are looking for a trusted source of supplementation. These supplements are based on the attitude that real food and hard work come first. According to Black Sheep, supplementation is there to improve an already solid bodybuilding program.

Now on to the beast we recently had the pleasure of testing:

WORKHORSE Will Give You Horse-Like Strength

Okay, maybe not. WORKHORSE is a comprehensive intra-workout supplement specifically designed to enhance blood flow, pump, and feed muscles. But with a couple of twists.

Workhorse combines immediate carbs from dextrose with a touch of caffeine (100mg – equivalent to a small cup of coffee) that kicks in during the latter part of your workout to keep you going stronger, longer, and harder. Workhorse also contains MSM powder (methylsulfonylmethane) to aid connective tissue and joints, by donating some sulfur to your depleted body. Even better, Workhorse is free of artificial sweeteners, colors, and flavors. In fact, two of the main ingredients are the flavors!

Is it a pre? Is it an intra? We say early-intra for those insane sessions

Well, why did Mike and Matt determine this was a “pre-intra” or “post-pre” product? One glance at the label’s directions and you will see!

3 minutes of rest recently yielded better gains that 1 minute. But can you last that long? You can now..

When you read the directions, twenty ounces is the recommended amount of water for a two scoop serving. Here is where things get interesting. The directions then tells user to drink the entire mixture “within fifteen minutes of warming up.”

But it makes sense when you realize that some people train for hours — not minutes — and they want something to helps sustain them! Say you have a fast metabolism and you take a pre workout supplement 30 minutes before a 2.5hr training marathon. You’re going to want something extra along the way!

So on our YouTube channel, Mike and Matt had a fun time figuring this out, because the “pre vs. intra” speculation created some awesome conversations about the ideal time to take these ingredients! Ultimately, you decide when you want to take this product – but it can be a “light-stimmed” pre workout for regular training sessions, or an epic intra workout for those longer sessions!

Right off the bat, Workhorse packs thirty powerful servings of 43 grams of product! That is a massive dosing! Kicking off the label are the 73 calories, coming from Workhorse’s 18 grams of carbohydrates, based upon dextrose.

As mentioned above, Workhorse embraces its ingredients to do the heavy lifting on the flavor side, and comes in a single flavor, “Raspberry Beetdown.” Thanks to the raspberry ketones and stevia sweetening, the flavor was enjoyable, as shown in our WORKHORSE video! For being naturally flavored and sweetened, Workhorse delivers a solid flavor without sacrificing ingredient efficacy. Just don’t expect sucralose and ace-k or other over-the-top artificial sweeteners.

So would you take it intra or pre?

After reading the ingredients, you might understand why we struggle to place this in the “Pre-Workout” or “Intra-Workout” category, because it can honestly be used for both. But right now, we’re leaning for “early intra” on those long-haul sessions. Depending on when you train and your preference of ingredients, it might work better for you as one than it might for another!

This could be an ideal product for powerlifters, bodybuilders, or really anyone who trains and doesn’t mind some extra carbs coupled with proven performance boosting ingredients!

We know this isn’t for everyone, but we’ve seen people who would love this – natural bodybuilders who train more than anything else in their lives. We’re always thrilled to test unique supplements, and this takes unique to a whole new level. You can check out Black Sheep Supplements’ WORKHROSE below: