Posted on October 29, 2019 by Mike Roberto and CJ Luther | No Comments

One of the industry’s hottest brands, SteelFit has grown quite a lot in recent years. This is no rookie brand, though – those behind the label came from Pro TanⓇ, bringing over 30 years of fitness industry experience. 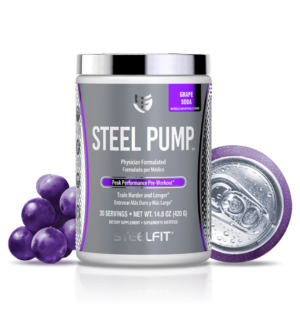 Despite the name, SteelFit Steel Pump is most interesting in the strength game, with a few ingredients that could help you take your lifts to the next level

SteelFit not only failed to disappoint, they’ve succeeded any expectations we could’ve possibly had! Within the past year in particular, the brand has ramped things up to new heights. We’ve covered already covered a few of their top products, such as Shredded Steel (our top rated fat burner with a high dose of yohimbine) and Steel Multi-V, but we of course need to backtrack and talk about their pre workout!

Steel Pump is SteelFit’s flagship pre-workout supplement, and it does more than the name implies. While this name of course prioritizes the pump, it still makes it a point to provide a litany of energy-enhancing performance aids that are incredibly useful in terms of training. In fact, it’s not the most insane pump, but it’s just right for SteelFit’s primary demographic: dieters and high level female athletes.

Thus, this product covers a few spheres, some not always associated with pre-workouts: energy, strength, and stress relief. The pump is literally bonus compared to those benefits! Steel Pump takes aim at all of these, and does so in interesting ways!

Before we get into the ingredients, however, make sure you’re subscribed to PricePlow so we can hook you up with all the supplement deals, news, reviews, and interviews you need!

What you’ll notice here is that despite the name, SteelFit doesn’t go too hard in any one direction. In fact, the pump is less exciting than the strength and stress support, thanks to a big dose of Peak ATP and betaine along with some KSM-66 Ashwagandha next to an “average nowadays” hit of 300mg caffeine that’s further tempered down by 200mg L-Theanine.

While SteelFit prioritizes an effective label above all else, they’re also sure to focus a good bit of their time on flavoring products, as well. Just as is the case with their formulas, they don’t disappoint – SteelFit knows how to make some great-tasting supplements! We were floored with the Apple Cider flavor of Multi-V, and now expect nothing but awesome flavors from the brand.

Pre-workouts tend to be a bit less adventurous in terms of flavors, and while Steel Pump does have its more conventional variations, it still has a unique offering or two! Here are the flavors you can find for Steel Pump:

We have to show this image one more time just to reinforce how good this Grape Soda flavor is! Watermelon Lemonade is next best for us!

SteelFit is one of the largest names within the industry, and is surely a brand that goes against the grain when it comes to being ordinary. While there’s nothing new in here, per se, very few formulators are including the research-backed Peak ATP in their products, and for that, we’re excited. Add in the KSM-66 and some near-clinically dosed betaine, and you have a pre workout that’s actually strong on the strength side of things!

SteelFit is a relatively “new” brand but we’ve known them in the business forever. So far their formulas are intense and we’re loving them!

Thanks to their openness in experimenting with new formulas and ingredients, SteelFit has made their business off of an incredibly diverse product profile, They offer various unique and effective products, most of which we’ve had the pleasure of trying and enjoying.

Despite being a bit more creative than some, SteelFit still takes excellent care of the core products that build the foundation for virtually all supplement brands. Steel Pump is a perfect example – it’s a powerful, workout-enhancing pre-workout, utilizing multiple ingredients to deliver next-level focus, energy, and pump. It’s a supplement you’ll want in your corner when looking to attack your next training session, packed full of the things you’ll need to raise intensity and get after it!