In our last Nutrex Research article, we unveiled The Warrior Series, the culmination of a year’s worth of hard work. It includes a fresh new look, along with a solid mix of existing and new products, such as Vitadapt Complete, Alpha Pump, Outlift Amped, and Lipo-6 Hardcore. But in terms of excitement, one supplement stood out in the new Warrior Series.

The chains are off! And we’re excited to see the flagship product of the Warrior Series is Warrior Powerful Pre-Workout.

“Warrior may be stronger than any pre-workout you have ever tried. Its effects are intense. Just one serving feels like you stepped on dynamite. Fuel your mind and body to the max and crush goals in the gym. Charge ahead with high stimulant energy and zoned-in focus for unstoppable power. Push beyond your limits. No weight is too heavy, no training too intense. No pump has ever felt like this. Unleash the Warrior within and get ready to pull out all the stops.” 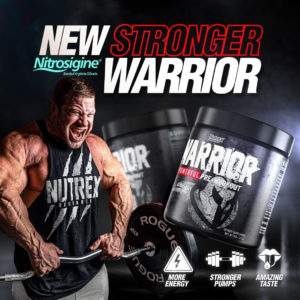 Nutrex swamped out GlycerSize for Nitrosigine and delivers a stronger pump.

Up until now Nutrex was known for their clinically-dosed comprehensive pre-workout, Outlift. It has everything users need to conquer grueling training sessions. Nutrex formulated the supplement to be the most advanced pre-workout formula they offer and with nearly 400 milligrams of caffeine, it’s not for the faint of heart.

For most consumers who haven’t tried Nutrex’s products, Outlift is a great place to start. However, if you can tolerate a hefty dose of stimulants — for the purpose of maximizing training sessions — Warrior may be a good one to go with. We always recommend starting with half a serving to assess your tolerance, especially when they come this strong. Warrior Pre can also be a great tool for those big training sessions where you’re going for a new personal record or in competition.

We have everything you need to know about Warrior below. But first, sign up for Nutrex Research news and deal alerts, because they’re always launching new products, flavors, and offering giveaways.

Nutrex Research carefully selected 10 ingredients to create a formula that delivers high-powered energy, locked-in focus, enhanced strength, power, endurance, and amplified pumps. It contains 400 milligrams of caffeine from two different sources, which is supposed to result in a sustained increase in energy.

Nutrex Research uses an open formula label that allows consumers to see the company uses solid dosages of each ingredient.

Here’s what one serving (8.8g) of Warrior consists of:

By acting as an osmolyte, betaine helps keep cells hydrated, which is further enhanced by the next ingredient.[1-3] There’s some evidence to suggest betaine can boost nitric oxide levels, resulting in improved blood flow, nutrient delivery, and waste removal in working muscles.[4]

Betaine is a powerful ingredient and it’s a great way to kick off the formula for Warrior.

There are several forms of creatine — the most popular is creatine monohydrate. For Warrior, Nutrex went with Creatine HCL, which is a creatinine molecule bound to hydrochloric acid. It’s not necessarily better than other forms, but the addition of HCL may improve creatine absorption and bioavailability.

Some users report less gastric discomfort with creatine HCL than with creatine monohydrate. Since the recommended dosage is between 3 to 5 grams per day, one gram is on the low end. However, creatine is extremely affordable, so consider picking up some to fill in the gap.