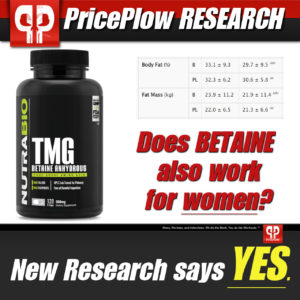 The data is in, and betaine works for fat loss in untrained women over placebo!

New betaine research is in, Ladies and Gentlemen, and no longer does the evidence support supplementation in men only. The results of a recent study indicate women can expect reductions in fat mass when supplementing with betaine as well as an increased work volume tolerance when paired with resistance training.[1]

Also known as Trimethylglycine or TMG, betaine is widely available in bulk for pennies a day, promotes cardiovascular and hepatic health with an excellent safety profile, and enhances athletic training based on research in males.[2] You can read about betaine and its previous research on our main article titled Betaine: A Safe, Natural Muscle Builder. Today, we get into the newest study, performed specifically on women!

So previous research demonstrated that betaine works great for the fellas, but what about women? Do the growing number of females hitting the gym stand to benefit from the addition of betaine to their training? 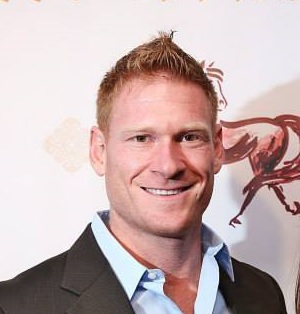 One of the world’s foremost experts on betaine, Jason Cholewa, has published new research!

Enter researcher Jason Michael Cholewa and colleagues at Coastal Carolina University, who recently published a study in the Journal of the International Society of Sports Nutrition, titled “The effects of chronic betaine supplementation on body composition and performance in collegiate females: a double-blind, randomized, placebo-controlled trial.”[1]

You may recognize the name Jason Cholewa. He conducted the best study to date on betaine’s effectiveness in trained men.[2] This time around, Cholewa and associates set out to determine if results from their previous work would carry over to female subjects. The results are in, and they are encouraging!

“The results of this study indicated that betaine supplementation may enhance reductions in fat mass, but not absolute strength, that accompany a resistance training program in untrained collegiate females.”[1]

“Weekly training volume increased over time………with a trend for greater increases in the betaine group.”[1]

Betaine for Women: The Study’s Methods

Twenty-three young women, median age 21, with no formal resistance training experience were divided into two groups, a placebo(n=12) group, and a betaine(n=11) group. The betaine group received 2.5g/day of betaine and the placebo group received, you guessed it, placebo.

Following one week of acclimation training, both groups participated in a routine consisting of 3 sets of 6-7 exercises per workout performed to momentary muscular failure. Three workouts per week were carried out, with two upper body days and one lower body day. Workouts were performed for 8 weeks on nonconsecutive days.

Following the 8 weeks of training, subjects had body composition testing performed on them as well as vertical jump, back squat 1 repetition maximum (RM), and bench press 1 RM. All physical performance tests were preceded by a five minute aerobic warm up.[1]

While not noted as significant by the researchers, betaine users fat free mass increased by 2.9kg or 6.38lbs vs 1.9kg or 2.64lbs for the placebo group.[1]

The researchers observed no significant difference between betaine users and placebo when comparing results of the respective participants’ performance testing. 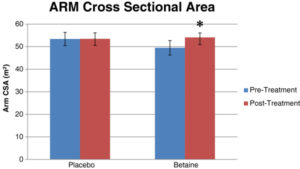 While strength gains did not seem to pan out (at least in 8 weeks of use), the betaine group had greater increases in training volume. As measured in kg/week, betaine users’ volumes were an average of 15,617kg in week one, and peaked during week four of training, with a volume of 34,229kg and finished with an average of 27,464kg.

As we’ve seen natural athletes needing to accomplish more total volume to get more results, this is promising data.

“The supplement was well tolerated as zero subjects dropped out as a result of supplementation and no subjects reported any side effects.”[1]

There’s a few ways to get betaine in:

As always, new research answers some questions and leaves us with new quandaries to ponder. In this investigation, betaine use in females supported a loss of fat mass as well as overall body weight but did not increase muscle size or strength when compared to placebo.

The betaine group did show an increase in work volume vs the placebo group, which leaves one wondering, had the study gone longer than 8 weeks, would this increase in volume lead to greater strength and muscle gains in the supplemented group? If females were to adjust their nutrition accordingly in order to support the increased training volume, would the betaine group pull ahead of non-users?

Either way, women are likely most interested in the loss of fat mass, and that’s where we did achieve significance. We continue to emphasize that betaine is a vastly underrated workout supplement, and recommend it in any athlete’s supplement stack.

For the rest of the story regarding its mechanisms and our discussion on the research performed on men (again at 2.5g/day), see our main betaine supplement research article.

As always, more research is needed, but we’re at the point where we can comfortably make a blanket betaine recommendation to anyone. The team at PricePlow will keep you updated if more research is to come.