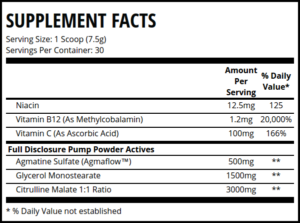 LAB TESTS CONFIRM: This is the correct PUMP Powder label – with glycerol monostearate!

A few of our regular readers have been asking, “Why hasn’t PricePlow been covering MAN Sports products lately?”

A very reasonable question, especially since their now-discontinued GAME DAY pre workout used a hot new stimulant we were excited about. We’ve always been fans of MAN Sports, especially given their amazing candy flavors in ISO-Amino and lack of artificial colors, two trends we love.

So what happened between us?

When MAN Sports originally released their new PUMP Powder formula, an immediate red flag set off for us: 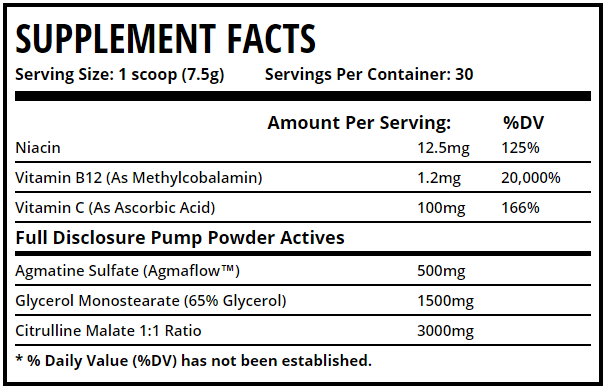 The first label run of Pump Powder, released only to the internal 1% list. Can you spot the error?

Can you find the problem?

If not, don’t worry, most people missed it.

The issue is that 65% Glycerol Monostearate is an impossible-to-achieve ingredient. 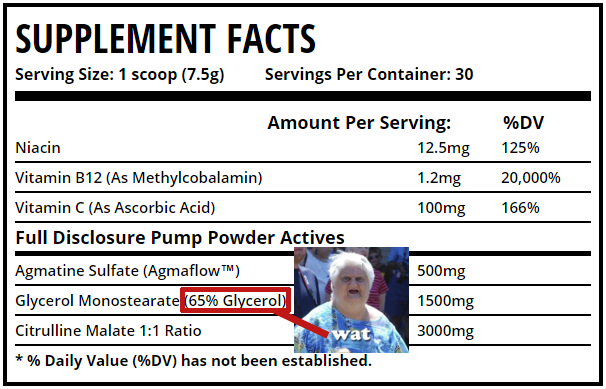 Unless you know some evil sorcery, 65% glycerol monostearate is physically impossible – math and chemistry provided below

The components of Glycerol Monostearate

To analyze what’s going on with this ingredient, we need to go back to Chemistry 101 for a second: 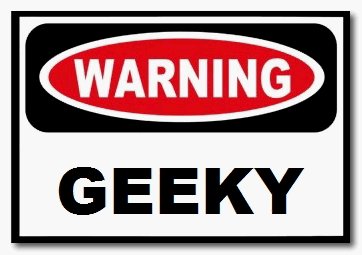 9″ /> WARNING: The next two sections of this article are straight geek. If you don’t care, click here to skip down

So when you combine these two, you’re going to roughly get a molecule with a molar mass of 376.57g/mol (you may lose a bit during the reaction, but this is close enough for our broscience purposes).

Is it possible to have glycerol monostearate at 65%?

Warning: Algebra ahead. Skip this section if you didn’t come here to see math

But maybe you can bind multiple glycerol molecules to stearic acid to achieve that 65%? Let’s do some more math to see what it’d take.

(ie, we want the ratio of glycerol to the total ingredient weight to be 0.65 – how many glycerols would that take??)

Since we only want ONE stearic acid molecule (as we’re keeping this a ‘mono-stearate’, and it’s too heavy to want any additional), this becomes easy to solve.

So our equation is now just:

Where X = [Number of Glycerol Molecules], the variable to find that satisfies the math to achieve 65% by weight.

So, unless you can somehow figure out how to bind 5 and three quarters molecules of glycerol with one molecule of stearic acid, this is impossible! You might be able to bind two glycerols to stearic acid, but 5 or 6? No way – stearic acid is a saturated fat molecule and there’s just nowhere to connect them! And definitely not 5.74 molecules…

At this point, we asked “WTF?, this label can’t be right.” We can’t yet write about this on PricePlow’s blog… but more importantly, what is this ingredient really?!

Meanwhile, the founder of the company stated in a now-deleted comment that “We didn’t have to use Hydromax. Our glycerol is 65% as well without having the clumping issues.” — this turned out to be false on both fronts, since the product (which has since been discontinued) clumped like crazy and our aforementioned lab tests were indeed at 25%.

What happened? The 65% confusion

A new ingredient named HydroMax has recently been used in several pump formulas. This is sold by Glanbia, the big Irish conglomerate company that owns Optimum Nutrition, BSN, IsoPure, and ABB, but they also sell tons of raw materials. It is glycerol bound to silica instead of stearic acid, and they claim ~65% glycerol by weight.

So at this point, my question was, is this ingredient in PUMP Powder some HydroMax clone, or is it just plain ol’ glycerol monostearate?

I contacted MAN Sports and we had a talk:

When MAN was launching this product, they were messing with a few different formulas, and were creating all kinds of mockups. Ultimately, they decided on glycerol monostearate, yet throughout the process, their designer had been sent a ton of stuff to create and throw on the web.

Rather than just put “glycerol monostearate”, the designer apparently took the “best of both worlds” approach, kept the “(65% Glycerol)” that was in one old label, while replacing the ingredient name with “Glycerol Monostearate” before that. That got leaked to Stack3d, and the rest is history.

Good news, however, is that it was caught quickly and the label was corrected to say “Glycerol Monostearate” before any retailers got their hands on it. But now we needed assurance, especially given the discussion on social media.

Despite this situation, MAN Sports still has one of the best designers in the business… if not the best

Our point of view

We’ve seen MAN Sports in person in their Dallas office, and know that they’re a wildly growing brand and it’s absolute chaos over there on a normal day, let alone when they’re in launch mode on two major products.

The designer is often the last leg of their launches, and seems to be under the constant gun because MAN’s doing so much stuff on their social media / web / newsletter. He also works remotely, so he isn’t really in the loop on every last detail. So we get it, mistakes happen. 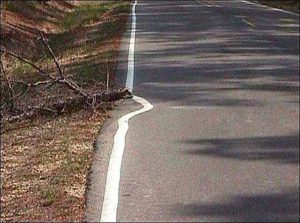 Just like the dude who didn’t want to move this tree branch… proofreading labels ain’t my job!

But at the same time, we made it very clear to Alex and Steven at MAN: IT IS NOT OUR JOB TO PROOFREAD EVERYONE’S LABELS. If Team PricePlow spent our time correcting misspellings and incorrect math on labels and posting them to this blog, we’d get absolutely nothing else done.

Steve said he understood and apologized. “Nobody is perfect.” He ultimately took responsibility, since it’s his company and the buck stops there, and I fully respect that.

Is it that big of a deal?

Now here’s the honest truth: I really don’t care about the Glycerol content in PUMP Powder. I could just elect to not take it, not write about it, and move on. On its own, this isn’t really that big of a deal.

The reason we cared is because we didn’t want something stupid to happen to GAME DAY (which turned out to be the only product that tested out compared to its competition).

Steve at MAN Sports said “I fully stand behind my products. Buy it and lab test it if you want. I’ll even pay for the lab test”.

Great idea! So that’s exactly what we did, and below you can see the results:

Boom! This product contains no “straight” glycerol, but it contains 1545mg of glycerol monostearate! Slightly over the 1500mg listed on the label!

SUCCESS. As hoped, this is indeed Glycerol Monostearate… and it’s even overfilled just a dash!!

And given that GAME DAY uses the same raw materials, GAME DAY also has glycerol monostearate and no 65% funny business either.

PricePlow and MAN Sports Make Up

So, long story short, we once again trust MAN Sports with their ingredients, and our bodies are ready to take and review GAME DAY and PUMP Powder.

Back in business, baby!

Thank you to MAN Sports for working with us, owning up to the mistake, and approving the lab test – you guys ultimately got the right thing done and these are the kinds of companies we like working with.

But we’re not done with this topic yet:

Unfortunately, this kind of stuff happens more often than we’d like. The most common thing we see is what we call “Supplement Math”, where a label’s active ingredients cannot possibly add up to what the serving size states (or some variation therein). 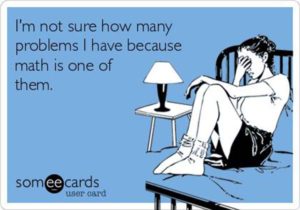 We call it “Supplement Math”, and it’s beyond ridiculous. Image courtesy SomeEcards

When we see these issues, here’s what we’re going to do:

If the brand does not respond within a week or so, we’ll start working on an open-ended blog post about the product, publicly asking the brand what is going on, and alerting potential consumers that something is questionable here. We’ll also demote the product (and possibly the entire brand) in the main PricePlow site, and may set a red flag on all of their products until the matter is resolved.

You can see an example of one in question posted to social media here, regarding ImSoAlpha’s “Vegan Alpha”.

Ultimately, if you screw up your label and go to market with it, this image says it all: 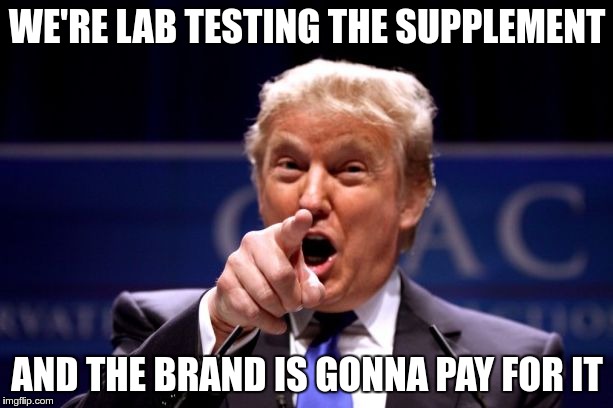 Screw up your label and go to market with it? Here’s what’s gonna happen

Thanks for reading, and thanks again MAN Sports for your patience.