For well over three years, iSatori’s Bio-Gro (bioactive peptides extracted from colostrum) have been the center of all kinds of internet controversy.

Do they work? Is it bioavailable? Is it better than raw colostrum? Why not just take more whey protein? Is it banned? Will I lose my natty card? 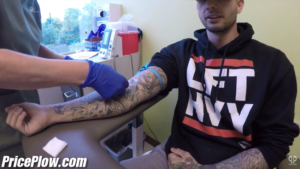 That’s right, we got blood work done before and after a month of Bio-Gro. Will it raise IGF-1 or GH levels?!

When marketed as an industry “game-changer” and “fertilizer for the muscles”, you’re sure to get these kinds of questions — and far more — thanks to the wonderful social media site named YouTube and the plethora of shills looking for something new and profitable to sell.

To make matters worse, in April 2013, we added to the noise, with one of our worst reviews yet: one was coming off of an insane contest prep diet and gained 30 pounds, while the other was playing more volleyball than lifting. Review FAIL.

Years later, the same questions still remain, and we’ve been on the fence the entire time, except we have a new tool in the shed: the PricePlow Blood Testing program.

And while the newer Bio-Gro labels no longer show that IGF-1 is isolated from Bio-Gro, iSatori’s own site still cites research showing that injecting IGF-1 into rat muscle tissue induces hypertrophy (archive.org link from May 31, 2016): 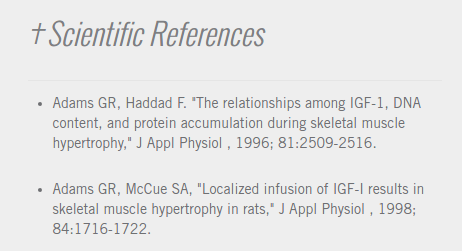 From iSatori’s Website. If they’re citing sources showing that IGF-1 injected into rats creates an anabolic state, then surely it’s fair game to see if we can actually get that IGF-1 into the blood stream, no?

To us, that sounds like fair game for blood tests!

The hope was to measure some level of biological change on top of the anecdotal feedback. We can probably all agree that injecting IGF-1 into rat skeletal tissue will do some crazy stuff. But can we ingest colostrum that’s heavy on the IGF-1 and raise its level in the bloodstream?

Before we go any further, we must note that this is not a clinical study!!! It is an “advanced supplement review”, with a participant of ONE.

What works or does not work for one person may not mean anything for you or anyone else. Without a seriously double-blinded, placebo-controlled study, we cannot official determine anything. We can just state how it worked here, and that is it. But it’s one more data point, nevertheless.

PricePlow paid for the blood testing.

Each day, we took the following:

While iSatori provided the 100% BioActive Whey and Amino Gro, we purchased the Bio-Gro ourselves.

iSatori would not assist with a dosing schedule nor would they help recommend any blood tests that could help confer Bio-Gro’s biological benefits.

The Before Blood Work:

Anecdotally, there was good recovery, had a great diet going and his body composition was quite in tune, being only about 5lbs from show weight.

There were several PRs during the training – some of this was due to his beginner-level status of some of the lifts, but PRs are PRs and worth noting.

Interestingly, around the two-week mark, his sex drive ramped up to wild levels, and he commented on very high quality (teenage-like) erections during that time.

The After Blood Work

Finally, what you’ve all been waiting for. Blood was drawn on May 12, 2016 at 8:24am at the same Quest Diagnostics Lab, in a fasted state, and sent to the same laboratory:

Needless to say, we were intrigued but disappointed by the numerical results, but definitely pleased by the actual results given the lifts. Note that both of the numbers were within normal ranges for the age, although below average per the Brazilian study. However, the Z-Scores indicate that he started off above average and then went back down to just an average score — all easily possible within the day’s pulses.

If there was a long-term biological effect for from Bio-Gro, it at least could not be determined by blood levels of IGF-1. Interestingly, his GH went up, still well within regular ranges, but a number that you see fewer people posting online.

In a perfect world, we’d have done at least a few more blood draws:

Since this is a study of one, we cannot truly learn anything except that Bio-Gro does not really have a massive impact on our IGF-1 levels. Yet it’s an interesting data point to have, and one more data point on the whole controversy than we had a month ago. 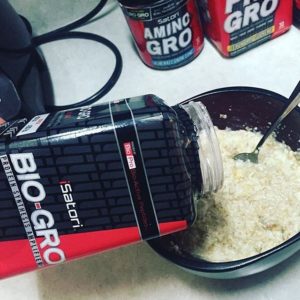 Do you Bio-Gro? Our answer is still about the same: only if you have a large budget and your other nutritional and supplemental bases are already covered

At this point, we have to wonder why iSatori is citing sources regarding injectable IGF-1 in rats when we are yet to see that it’s even that bioavailable. After all, if it was, wouldn’t all of those IGF-1 sprays be the hottest supplements in town?

We also now have to further wonder if raw colostrum is better than Bio-Gro, since Bio-Gro seems to have been extracted for something that very possibly isn’t orally bioavailable, and maybe they removed something really good from the colostrum to get there.

Unfortunately, this review fails in that it leaves us with more questions than we originally started with.

Further unfortunately, we’re left in the same exact place where we started regarding our recommendation on whether or not to buy Bio-Gro: “It could be good, but it’s probably a second- or third-tier supplement that’s best suited to those with a big budget – not the poor college student budget”.

We look forward to iSatori’s further results-based research, and will continue to refine our blood testing program. Next up… a natural testosterone booster?!