Nutrex Research has been on fire in 2019 – especially with the pre workouts. But it’s about to get better.

As a quick 2019 recap, here’s what happened on the pre workout front alone from the powerhouse brand:

But that’s not enough, because now it’s time to go stim-free for the pumps:

Now here’s the latest and greatest addition to Nutrex’s pre workout family, Alpha Pump. The formula is live, and we can guarantee you that it’s far different than all of the other stim-free nitric oxide supplements out there.

We have some in-depth information about the unique new pump supplement below, but first, sign up for our Nutrex alerts because you’re going to want to get involved in our giveaways, reviews, and deals for this one!

Meant to be stacked with your current pre workout, Alpha Pump will be lower cost and will not have the “same old same old” ingredients. They’re bringing at least one new ingredient to the market, and even the electrolyte blend is something to write home about too.

Announced on August 1, 2019, Nutrex has now delivered on quite a unique, stackable stim-free pre workout. This is a relatively “small” label, utilizing only 5 ingredients. However, Nutrex isn’t pulling any punches – all 5 of them are either patented or trademarked clinically-tested ingredients! In other words, this entire label is “proven”, and the science backs it up!

Here’s what each 8.8g scoop, of which there are 20 in each container, delivers: 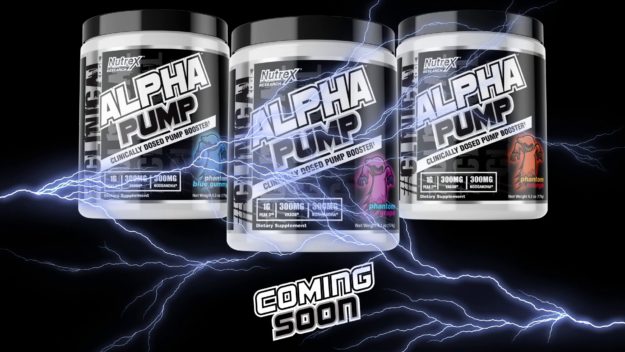 As you can see from the video images above and below, Nutrex is entering with a bit of a “change” in their branding / flavor message, going for the phantom feel:

Stackability – the sky’s the limit!

Alpha Pump’s extraordinarily unique label makes etches out its own, singular place in the supplement industry. By utilizing 5 ingredients, each of which are stimulant-free and are natural ingredients, Nutrex has created an incredibly stackable! With each ingredient here being somewhat uncommon inclusions in the pre-workout market – sure, some other formulas have VASO6Ⓡ, but most certainly not all of them – Alpha Pump can be stacked with virtually any other product. Not your same old citrulline product here — we already have that in Outlift after all!

We both got one serving to play with.

I’m really enjoying the direction Nutrex took with this product. Since the ingredients are not the traditional pump ingredients, it makes it a perfect standalone or addition to a preworkout without overdoing the citrulline, etc.

During my time using it my arms pumped incredibly quickly and I left the gym unable to fully use them for at least an hour — I wasn’t able to scratch my own neck after arm day!!

Mike’s analysis: Not only did this give me an excellent pump, it seemed to bring endurance too — which added more pumps itself!

For example, a set of 20 pushups easily turned into a set of 25. It “flowed” really well, if that makes any sense. Sometimes pumps seem to hurt those last few reps. This was the total opposite.

I’m really interested in how people are going to use this one. Nutrex zigged when everyone else is zagging and we always appreciate fresh takes on a category.

The gang down in Florida has been lucky enough to have more than one serving, and it’s growing even more with time:

“The more our staff here uses the product the more they love it. We are definitely excited for this launch.” 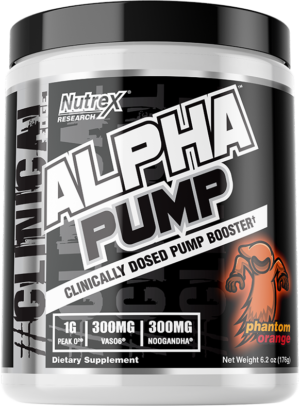 Are you Phantom Orange… Or Phantom Grape?!

The team at Nutrex Research prides themselves on their ability to formulate honest and effective products. Time after time, no matter what we’ve seen from them, that’s remained true – their products work, they work better over time, and they work better than most!

Sure, there’s Outlift Stim-Free, but Nutrex didn’t really have a stim-free pump powder. So when a brand this big does it, they have to do it different, and they sure did that here.

Nutrex came into 2019 looking to set the industry ablaze, and Alpha Pump is the latest bit of gasoline poured onto that fire. This unique, one-of-a-kind formula is the perfect complement to your current supplement regimen. Throwing these powerful, clinically-demonstrated ingredients into your training has the potential to either start yielding gains, or amplify the progress you’re currently making. The compounds within Alpha Pump take aim at vasodilation via different angles, take cognition to new heights, and raise other supplements up a notch!

So get ready to get pumped – Alpha Pump’d! 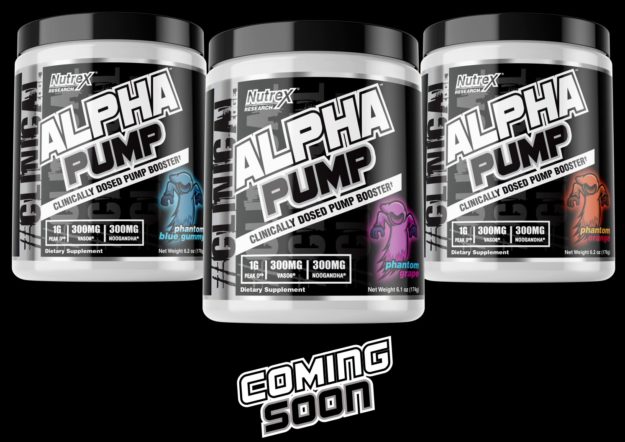 This image for those of you who don’t want the lightning getting in the way of your gains (which is crazy, the lightning is awesome)