This morning, Steckler LLP, the law firm of Bruce Steckler and Co-Counsel for USPLabs contacted us with some very important news:

The wrongful death case against USPLabs (Jack3d) and GNC has been dismissed by a federal judge. 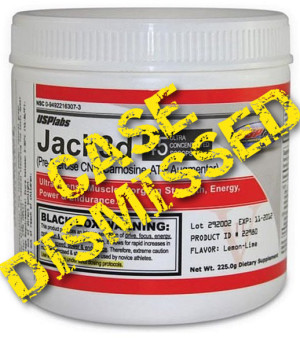 Was Jack3d and USPLabs just vindicated? A federal court has dismissed a wrongful death case against USPLabs and GNC.

This highly publicized case concerned the death of soldier Michael Sparling, who died during military training exercises at Ft. Bliss, TX in 2011. The plaintiffs (Michael’s parents) filed wrongful death charges against USPLabs and GNC, claiming that Jack3d caused his death.

USPLabs has repeatedly maintained that Jack3d is (was) safe, especially when used according to the label, and has now been vindicated one more time.

During this case, Steckler and USPLabs cited a report by the United States Department of Defense, which stated that the “evidence does not establish that DMAA containing products are causally associated with adverse events.”[1] The courts agreed with the DOD’s findings when overruling the plaintiff’s objections to dismissal.

“We are extremely pleased at the outcome. This victory exonerates USPlabs and proves that these allegations were unfounded.” — Bruce W. Steckler, lead counsel for the defendants

Even more interesting, however, is this quote:

“The most important information to emerge through this lawsuit is that the court found no scientific evidence that the product is harmful or hazardous. Mr. Sparling’s tragic death was simply not caused by this product.”

— Bruce Deming, counsel for USPlabs in the civil case

Jared Wheat Speaks up with an important upcoming announcement

Before we share the PDFs, we have one quote very well worth reading, from Jared Wheat of Hi-Tech Pharmaceuticals, the company that continued the fight against the FDA for the right to use the ingredient:

“We are pleased that USP won the case and DMAA was exonerated. In our fights over the years with ambulance chasers and class action shakedown lawyers we have won on similar grounds. We expect in the lawsuit where we sued FDA to get a similar outcome.

We have sold over 200 million doses of DMAA with no serious AERs.

We will have our expert report from our toxicologist ready next week and will share with PricePlow. It shows DMAA has fewer AERs than Vitamin C per amount consumed, which backs up the safety of the compound and there is no evidence establishing that DMAA containing products are causally associated with adverse events.”

We were aware that the toxicology report was coming, but now we have a deadline. Stay tuned for it on this blog, this is going to be critical reading to all supplement users!

For those of you unaware, Hi-Tech Pharmaceuticals sells a Jack3d clone named Jack’d Up and has kindly disclosed the most important ingredients so that we know how to dose it effectively and safely.

Back to the case, here are links to the PDFs:

The second PDF is long, but is also where things are very interesting.

Three major points, which led to the dismissal of three expert witness testimonies for the plaintiffs:

Ultimately, with the three medical expert witnesses all having their testimonies thrown out and overruling the objections filed, the judge then dismissed the case in early 2016.

Obvious disclaimer with all stimulant supplements

USPLabs has always steadfastly maintained that its products are safe.

Now, this is not to say that everyone should go and take the stimulant. It’s still an advanced supplement for experienced users who are perfectly healthy, train in controlled environments, and use conservative doses according to the label.

Although we have a long ways to go in terms of compliance and quality assurance in this industry, this case vindicates USPLabs in some ways, who has seen quite a bit of trouble due to this kind of media attention.

We look forward to the upcoming toxicology report from Hi-Tech Pharmaceuticals which will hopefully affirm (and more) the court’s conclusions.

With respect and condolences

I’d like to take a moment and be real here.

Please understand, this post in no way is meant to disrespect the Sparling family. We are sincerely sorry for your loss, and for the military’s loss as well. Michael is said to have been an incredible young man.

If this post comes off as celebratory, I do apologize for that.

PricePlow will continue to push for the disclosure of all stimulant doses in supplements, as we believe this leads to higher safety levels and a more informed consumer.

At PricePlow, we are quite liberal when it comes to a consumer’s choice to consume what they wish, so long as they have all sides of the research (which we do our best to provide) and understand their personal risk tolerance. However, we’re extremely conservative when it comes to the actual dosing and usage.

I stand behind these policies, and will continue to push them and educate the customer base as our traffic steadily grows. I personally feel that if more users would take the time to understand and follow them, there would be far less problems.

Further, we will continue to push companies to disclose their stimulant doses, as we have with Hi-Tech Pharma, which we feel leads to a better-informed and safer consumer.

If you have a son or daughter who is getting into supplements, have them contact me with any questions and I’ll give them the honest truth and conservative recommendations for beginners, with sources cited.

Our deepest condolences to the Sparling family.

Thank you,
Mike and the team at PricePlow