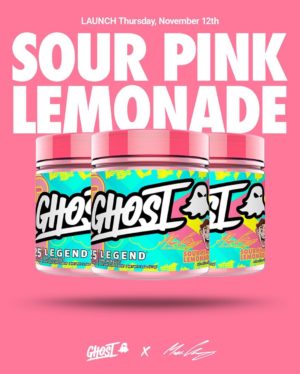 Who is Maxx Chewning? He’s a YouTuber, fitness influencer, entrepreneur, powerlifter, Ghost Lifestyle sponsored athlete, and proud owner of a goldendoodle named Dood. He lives in Houston, Texas, owns a clothing company called Ever Forward Apparel, and loves sour candy so much that he started a company and named it Sour Strips.

If there’s one thing that Maxx loves just as much as sour candy, it’s mango margaritas.

So when Dan Lourenco and Ryan Hughes, owners of Ghost, approached Maxx to develop a custom flavor for Ghost Legend, he instantly knew what it would be. Mango Margarita Ghost Legend was the first flavor collaboration between Maxx and Ghost, but the alcoholic-themed flavors didn’t stop there.

A year later, Ghost re-launched both Mango Margarita and Strawberry Daiquiri, which was ranked one of PricePlow’s Top Flavor Systems of 2019.

Needless to say, Maxx knows how to flavor a delicious pre-workout, but what’s next? A completely new flavor.

“Sour Pink Lemonade Ghost Legend is all about taking a very classic flavor, but making it cool and different.”

Two things that Maxx loves are beta-alanine tingles and the pump. This will be a globally compliant formula, so all the “Legends” worldwide can enjoy another epic flavor collaboration between Ghost and Maxx Chewning!

The launch date is to be determined, so make sure to sign up for Ghost news and deal alerts below! Keep reading for more information on Maxx Chewning’s Sour Pink Lemonade Ghost Legend!

Check Out This Video To See Maxx’s Thoughts On The Flavor!

As mentioned above, Maxx Chewning’s Ghost Legend V3 will feature a limited edition formula to go along with the new flavor. Although Ghost has tweaked the formula in the past with other versions of Maxx Chewning x Ghost Legend, this one will be even more fully loaded!

Each tub will contain 25 servings. You’ll notice that it will have a larger scooper than OG Ghost Legend, so you can take it straight to the dome. There’s no need to take one-and-a-half scoops with this version of Ghost Legend! 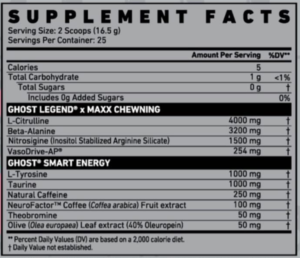 Ghost Legend x Maxx Chewning V3 looks like it’s going to be the best one yet.

If you’re a fan of the previous renditions of Maxx’s Ghost Legend, then you already know he enjoys adding some extra pump ingredients. Ghost usually includes VasoDrive-AP, which is not found in the original Ghost Legend. But this time, they increased the dose from 150 milligrams to 254 milligrams per scoop for even greater muscular pumps.

One of the biggest changes Ghost made to the formula was adding the clinically-studied Nitrosigine dose, a patented ingredient from Nutrition21 that outperforms other pump ingredients on the market. Nitrosigine is composed of three key ingredients: arginine, silicate, and inositol — collectively known as inositol-stabilized arginine silicate.

With this combination, Nutrition21 solved the issue of taking pure L-arginine on its own, which is poor bioavailability and absorption. By binding L-arginine to silicate and adding inositol as a stabilizer, arginine is readily absorbed by the body and used to boost nitric oxide levels, leading to increased blood flow, nutrient delivery, and muscular pumps.[1]

PricePlow is a huge fan of Nitrosigine and Ghost is starting to use it more and more. We’re hoping it will make an appearance in Ghost Legend V2.

If you want to learn more about Nitrosigine, check out our in-depth blog post, a href=”https://blog.priceplow.com/supplement-ingredients/nitrosigine” target=”_blank” rel=”noopener”>Nitrosigine: The Nitric Oxide Booster That Enhances Brain Function.

Ghost kept the L-citrulline, an excellent nitric oxide booster, at 4 grams, increased beta alanine to 3.2 grams for extra tingles and muscular endurance, and switched the caffeine anhydrous to natural caffeine. They increased the dose from 202 milligrams to 250 milligrams. This not only gives users a steadier rise in energy, but it makes the product a globally compliant formula.

In case Sour Pink Lemonade Ghost Legend sells out before you can get your hands on it, here are some other options! 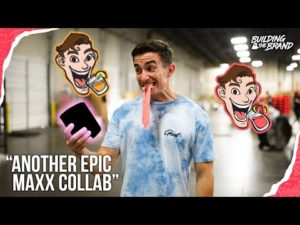 Here’s a list of all available Ghost Legend flavors:

Maxx Does It Again!

Ever since Ghost started doing flavor collaborations with their sponsored athletes, the products instantly became a hit with Ghost fans. Ghost typically launches a limited edition version of Ghost Legend just a few times per year and the products are always slightly different, and the formulas keep getting better. 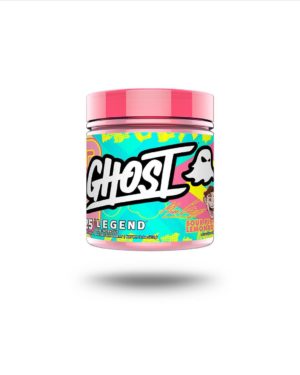 Don’t miss out on another legendary flavor collab!

These limited edition runs are known for selling out fast — especially Maxx Chewning’s Ghost Legend, so be ready when the launch goes live.

Stay tuned for the official launch date announcement and the full supplement facts panel reveal. From just this preview alone, you know it’s going to be stacked and Ghost has never done a 25-serving tub before.

As always, follow us on social media (@PricePlow) to stay up to date and subscribe below for all Ghost news and deal alerts!