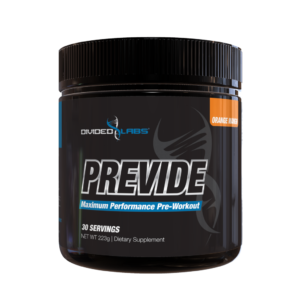 Divided Labs potent pre workout Previde boasts a completely transparent, and rather comprehensive, profile that’s sure to take your workouts to the next level!

We’re incredibly fortunate here at PricePlow to have an extremely tuned in fanbase that regularly engages with us both here on the blog and on our various social media outlets. One of our regular readers (shout-out to Miguel!) told us about this powerful new pre workout he’d been using with great success.

Being the stim fiends and pre workout buffs that we are, our Spidey-sense immediately went crazy and we went digging up any and all info we could find on this potent pre workout.

The product of note was PREVIDE, a transparently dosed, full spectrum pre workout that packs everything you’d expect from a premium pre workout developed by Divided Labs.

The big issue that will rub many of you the wrong way, however, is that it’s a two-scooper, and that means half the perceived value.

We’ve got the breakdown below, but first, take a moment to check the best deal and sign up for PricePlow alerts:

As stated up top, Previde is indeed 100% open-labeled, and at 2 scoops it’s a true monster of a pre workout, provided you can handle the 350mg caffeine in those two scoops! Given that energy load, Previde will have you up and on top of your game like few pre workouts can.

Note: Doses listed below are based off 2 scoops, which drops you down to 15 servings!!

There’s really nothing bad to say about this choice of ingredients. The question is, between 1.5 to 2 scoops, you’re looking at 15-20 workouts or so. Is that going to be worth the prices we’re seeing?

Would it have just been better to go with 30 full servings and charge more? Unfortunately, we’re kind of stuck in limbo between “solid product” and “two scooper that won’t last a month”. 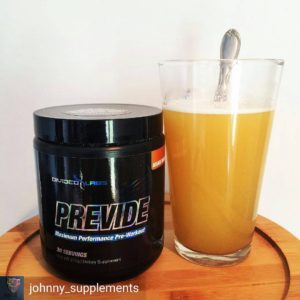 That orange mango PREVIDE sure does look appetizing…

As an up and coming supplement, PREVIDE so far only has two flavors: Orange Mango and Blue Raspberry. Should this get the rave reviews we anticipate, based on the outstanding formula, we could easily see this getting additional flavors in the not too distant future.

We’ve been inundated as of late with loads of top pre workout formulas here on the blog. PREVIDE is just the latest example of a product category that seems to be getting better and better as time goes on, but it does come with the one caveat in that it’s likely not going to last you even a month, whereas many of the competitors will.

Pre workouts used to be dominated by stim-and-crack “super concentrate” formulas that packed in a ton of stims into a small concentrated scoop. Now, the pendulum has swung in the complete opposite direction, where nearly every product we encounter lately seems to be another comprehensive, all-inclusive type product.

All we can say is, that we’re big fans of this shift and hope it continues for the foreseeable future! Now all that remains is for us to get our hands on some PREVIDE and see how it stacks up to the rest of the top contenders we have for Best Pre Workout!