Choline supplements are frequently used by athletes, bodybuilders, and even students to increase focus, cognition, and memory formation. The problem with certain forms of choline supplements is that they are not absorbed all the well by the body.

However, alpha-glycerylphosphorylcholine (Alpha GPC) is one of the forms that is highly bioavailable and readily absorbed by the body. Several studies have been done on this form of choline in regards to cognitive improvement, Growth Hormone output, and power development.[2,3,4]

We often compare the two high-end choline supplements, Alpha GPC vs. Citicoline (CDP Choline), usually siding on citicoline end of the argument because we ‘feel’ it more. Today that might have to change.

Reason being, not much has been studied in the way of Alpha GPC’s role in improving strength levels… until now. Could a brain boosting nootropic really help improve your strength levels in the weight room, translating to better performance on the field of competition?

A new study published in the Journal of the International Society of Sports Nutrition investigates the effects of Alpha GPC on strength and performance. 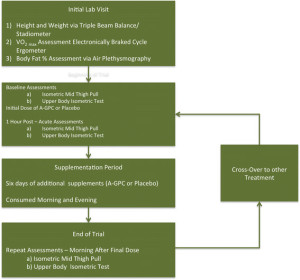 13 college-age males were recruited for a 6 day trial to test the effects of 600mg of Alpha GPC on upper and lower strength.[1]

Thirteen college-age males were recruited for a double-blind, placebo-controlled crossover study lasting six days.[1] Participants were administered 600mg each day of Chemi Nutra’s AlphaSize Alpha-GPC or placebo. Subjects were also asked to follow their normal day-to-day routine and not add or remove anything from their typical diet or supplementation regimen.

After a 1-week washout period, the males repeated the trial with the other treatment (this is the crossover side of things). 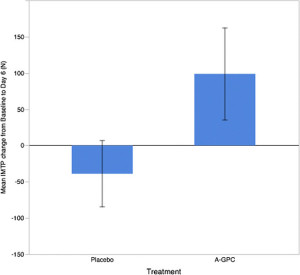 The greatest improvements were seen in lower body strength results, where the isometric mid-thigh pull peak force significantly increased from initial testing baseline compared to placebo. Unfortunately, the upper body results were not statistically significant, but they did trend “towards greater change from baseline force production.”[1]

Regarding the discrepancy in results for upper body testing, researchers said it may be due to a high variability of upper body strength among the participants, which could have limited their statistical impact. Nevertheless, the researchers maintain there were improvements, and the good news is that further studies with more participants are coming, which may smooth that out and give even better data.

The group of researchers further commented,

“The results of the study suggest that A-GPC is effective at increasing lower-body force production after six days of supplementation. Given that, in many sports, it is understood that a very small change in performance, often times less than 2%, can significantly affect outcomes, it is important to note that the six days of A-GPC resulted in greater than a 3% increase in lower-body isometric strength.”[1] 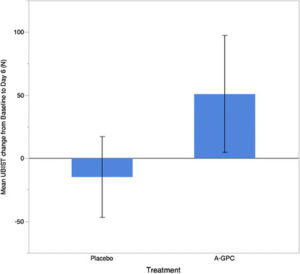 The results from the upper body tests were not statistically significant, but did trend towards improvements in pushing strength.[1]

After seeing the study for ourselves, Team PricePlow reached out to Dr. David Bellar, Ph.D. RSCC*D, CSCS*D, director of the School of Kinesiology at the University of Louisiana at Lafayette regarding future trials involving Alpha GPC.

During our communications, Dr. Bellar mentioned that, “A larger trial is currently underway in our lab where we plan to study 48 individuals with two different doses of A-GPC compared to Caffeine.”[1]

Additionally, Dr. Bellar also stated that within the next six months, his team will be investigating tart cherry products effects on human performance. We’ve definitely been seeing tart cherry trending in products, so this lab is up to good things.

Below are the blog posts tagged with Alpha GPC. Note, however, that nearly none of them contain full 600mg doses of the ingredient, but they’re usually a great start, and then you can add a bit more on your own:

We’ve always loved choline-based supplements – but mostly for the “mind-muscle” feel they provide. Now we know that there’s much more going on than that!

In fact, a few of our top-rated pre workout supplements contain it already – but we’ll see what brand is first to respond with this clinical (albeit kind of expensive) dose!

Expect to see more AlphaSize Alpha-GPC in pre workouts in 2016!

Anyway, every athlete and average gym rat is looking for safe, natural ways to increase their performance in the weight room and on the field. It doesn’t matter if you are a weekend warrior or an Olympic athlete, there’s an innate desire among us all to get bigger, faster, and stronger.

Sure we all know about creatine, beta alanine, betaine, etc. but where are those hidden gems that not everyone may be using?

Initial studies involving Alpha GPC show some promising results for improving power and strength levels, and future studies will hopefully back this up along with an “ideal” dose.

Make sure to stay tuned to PricePlow for any further developments regarding Alpha GPC studies and for Dr. Bellar’s larger trial on it in the coming months.