Advanced GG has a passion for what they do and the products fully reflect that.

Normally on this blog, we cover supplements geared towards athletes and gym goers looking to get an extra edge, be it in strength, sports, physique, or endurance. But today we cover a different kind of athlete, who has a different kind of need – the cognitive kind. We’re talking about gamers and esports athletes, a different breed of competitor who have long been underserved by the food, drink, and supplement industries.

Many of the sports supplement companies that we follow saw the surge in esports, creating supplements geared towards gamers. But we mostly remained quiet, because it was clear they weren’t gamers and were just in it to make a quick buck. Gamers smelled this from a mile away as well, rejecting those supplements, which were subsequently discontinued one after another.

Gamers deserve better. They can now get it.

Gamers deserve more and gamers deserve better. They don’t want to hear about studies on bodybuilders and golfers. They don’t care about “skin splitting pumps in the gym”. They speak their own language and have their own role models. Yet they know that a bit of long-lasting energy and focus with no crash can go a long way into a gaming marathon – and such ingredients do exist.

So who better to put out a real gaming supplement made with ingredients with real research on real gamers than… gamers themselves? 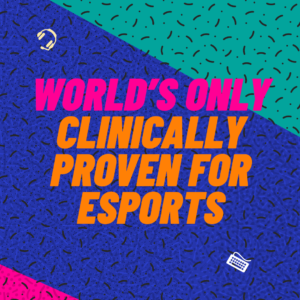 And in our opinions, doing it right is better than being the first to market.

At their core, Advanced.GG values all the same things you do: quality, transparency, ethicacy, and performance. They didn’t want to just put out a few products with some fancy marketing to make money. They’re in it for real. They live and die by this. And if you turn the label around and look at the supplement facts panel, and talk to the team of gamers they’re putting together, you’ll see how much it really matters.

Focus 2.0 is the flagship product that really showcases everything Advanced.GG is about. It has clinical dosages, ingredients backed by research, and a fully open label, all to ensure the consumer that they are getting what they paid for. Focus 2.0 was specifically designed to enhance your gaming experience, and you don’t need to be an esports competitor to enjoy the performance boost it provides.

In this post, we’re going to fully explain the benefits and breakdown the science of each ingredient included in Focus 2.0. This will allow you to see why Advanced.GG is one of the leading esports companies in the world, and certainly the leader in terms of supplementation. Before we send you to another level with Focus 2.0, sign up for our Advanced.GG news and deal alerts, so you can stay tuned and unlock your true gaming potential.

Let’s dive into what ingredients make Focus 2.0 smash the competition!

Focus 2.0 Ingredients: Take Your Gaming To The Next Level 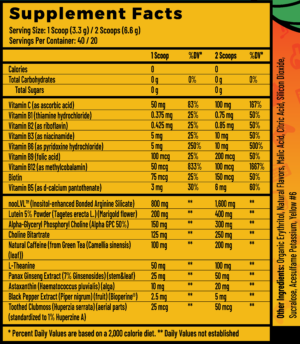 A fully transparent label with some of the best ingredients on the market!

No matter what the product is, PricePlow always likes to see a fully disclosed label, so the consumer knows exactly what is going into their body. Too many gaming supplements are proprietary blends, which means you don’t know what you’re getting, and the brand may change the formula between batches as it suits their profit margin – without changing the label.

A fully-disclosed formula allows us to better understand if it’s superior to another product or not – and Focus 2.0 is exactly that: superior.

We also really appreciate ingredients that are backed by research and are used at clinically-studied doses. Lucky for you, Advanced.GG shares the same values we do, and Focus 2.0 showcases each one.

The ingredient panel is so stacked, it lists the dosages for both a one and two scoop serving size. This allows you to customize how locked in you want to feel, as there is caffeine inside (100mg per scoop, so 200mg in a full two-scoop serving). But for this analysis, we’re going to cover a full two scoop serving to see how focused we can get. 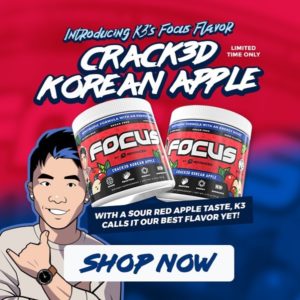 Advanced GG has taken their flavor game to the next level by collaborating with some of the most popular content creators around.

What’s really unique about Advanced.GG and Focus 2.0, besides this epic formula, are their flavor collaborations! They teamed up with some of the most well known gamers and content creators in the industry, like Mtashed, Mr. Fruit, and The Korean Savage to create one of a kind flavors.

You can see Advanced.GG likes to go the extra mile to show you why they are the best in gaming supplements. Every detail matters, from the formulas, packaging, and flavors, Advanced.GG pushes the limits to give you the best product money can buy.

Here’s an updated list of all Focus 2.0 available flavors:

Focus 2.0. This isn’t a side-project. This is the project.

Unlike those other supplement and energy drink companies who toss a gaming product out there and hope you bite, Advanced.GG’s focus is solely on gaming.

And just like the best gamers in the world, they don’t back down when a competitor steps into the scene. They kill them with the quality, efficacy, purity, and performance of their products. Being focused on one industry, allows you to nail down your company’s purpose, and gets everyone involved to stand behind every product that gets released.

Whether you’re a die hard gamer or just a weekend warrior, nobody likes to lose. Being at the top of your game requires laser focus, that gets you locked in and helps zone out the many distractions of the outside world. Focus 2.0 will be your go to supplement whenever you need a boost!

It’s not very often that PricePlow analyzes a supplement specifically designed to boost gaming performance, but after looking at this formula, we couldn’t resist sharing it with all our readers. 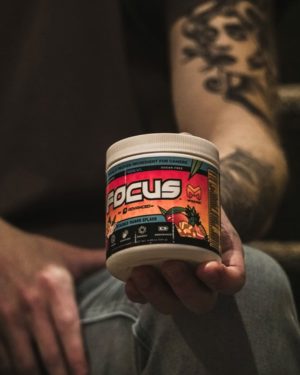 Advanced.GG is one of those companies we love to work with because they strongly value the same things we do: quality, transparency, efficacy, and passion. Even though Focus 2.0 is heavily marketed to gamers, it could help you in various ways, like increasing your performance at work, helping you knock out an essay for school, or even crush a workout.

Having a product on hand that gives you locked in focus and sustained energy goes far beyond just gaming. That’s another reason why we really wanted to cover this product, at its core, Focus 2.0 is an amazing focus aid that can be used by several people. They may have not been the first ones to release a “gaming supplement”, but Advanced.GG is doing everything right to make sure their product dominates the market.

We’re excited to see what else they have in store for the upcoming year, because as the esports industry continues to grow, PricePlow knows Advanced.GG will as well. There are proprietary dragons in this niche to slay, and this company has the formula to do it.

PricePlow has you covered with the latest industry news, reviews, and deals, but make sure to subscribe down below so you don’t miss out on what’s next for the biggest brand in esports supplements.