How do you close out the decade properly? By taking the Best New Flavor System of 2019 and putting it into the Best New Supplement of 2019!

We’re talking about none other than… 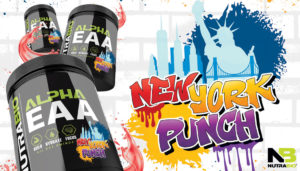 After a monstrous year evidenced on our NutraBio News page, we hinted that the updates to the Men’s and Women’s MultiSport multivitamins was not the last thing to be announced. Instead, the brand that builds supplements and bodies Without Compromise wanted to cap off the year (and decade) in flavorful style.

Alpha EAA is a full-spectrum essential amino acid supplement for anytime use (especially training), but it came with a twist – nootropics from two forms of choline and Huperzine A, and adaptogens in the form of KSM-66 Ashwagandha!

New York Punch, on the other hand, is a flavor system that was released as an exclusive Intra Blast flavor for Natural Body Inc (in hype for their annual Epic Block Party), and it reviewed so well that it had to be used in the other sports supplements from NutraBio!

Enough talk, let’s get to the product updates, coupons, and our flavor review video:

See our main Alpha EAA blog post for the most in-depth information on all of the ingredients inside. 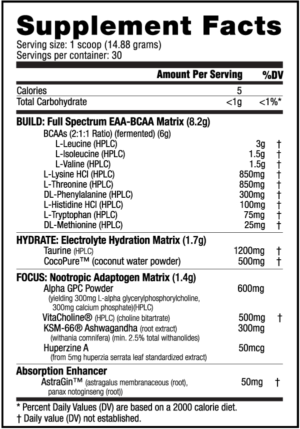 As always, we have an open formula label, but the transparency with the Alpha-GPC is what really matters. This label is from the original flavors.

But the long story short is that this supplement won us over with its “feels” — it’s incredibly focused, puts a touch of stimulant-free pep in the step, and makes training just that much more fun and connected. Alpha EAA rocks during ultra hard, ultra long, or simply stressful training sessions.

But that’s in tons of amino acid supplements. So to make the story far more interesting, NutraBio added two sources of choline for that mind-muscle connection and then did the unthinkable in adding KSM-66 Ashwagandha to provide more cortisol control. It’s a stimulant-free training aid, but it feels mildly stimulatory with this synergistic combination!!

The above synergy is exactly why we named Alpha EAA the 2019 Supplement of the Year, and quite honestly, it wasn’t even close.

But this flavor is on a whole new level. There’s orange… some mango… just the right amount of coconut… and maybe some guava or kiwi?! We’ve honestly never gotten a straight answer Everyone tastes something different from New York Punch, and that’s another reason why we love it!

All in all, this is why we named New York Punch our 2019 flavor system of the year (when it was only in Intra Blast).

The list below will stay up-to-date with all of the Alpha EAA flavors: 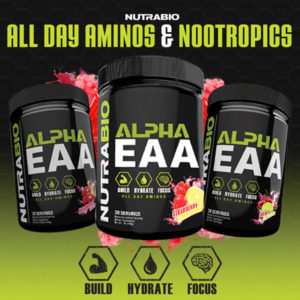 Stack with NutraBio’s Alpha EAA for quite the fun ride! If you need caffeine, add some CaffPlus!

In 2010, we entered the market with so much confusion – proprietary blends, micro-dosed and pixie-dusted formulas, legal uncertainties, all kinds of liver-destroying muscle-building compounds, and outright credit card scamming over “miracle berries” discussed by “TV doctors” based upon redacted studies.

How much a decade has changed. 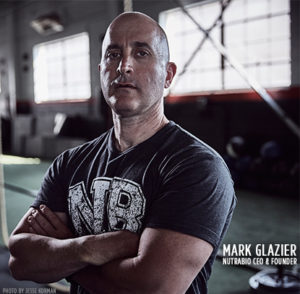 Here’s Mark Glazier, the man behind the brand leading the way for transparency and full disclosure in supplements.

Mark Glazier and NutraBio has been one of the major reasons for the industry’s renaissance, as evidenced in everything they learned in The NutraBio Story. Making supplements without compromise, they pioneered full-disclosure formulas (down to the amount of sweetener!) and even release 3rd Party Lab Tests of all of their products!

But one thing was missing: insane flavor systems! That came all throughout 2019, with such epic hits as the Breakfast Series Whey Protein Isolates, Bourbon Banana Nut, the aforementioned Strawberry Lemon Bomb and Dragon Fruit Candy systems, and so many more.

But New York Punch? Now that’s on a whole new level. Are you ready for the next decade? Mark Glazier and NutraBio sure are.

Get ready for NY Punch!