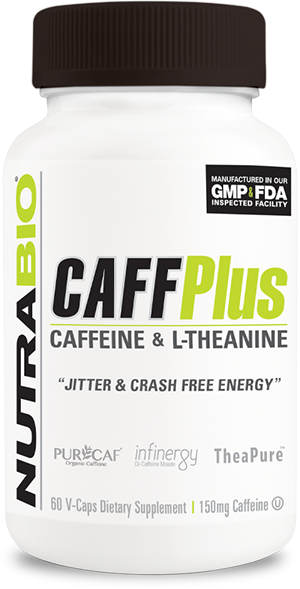 What better news to hear than a new product coming from our favorite fully transparent powerhouse company, NutraBio! Right after dropping fresh flavors for their aminos (Strawberry Lemon Bomb is indeed the bomb) and a brand new whey protein isolate flavor in Bourbon Banana Nut, they’re are back with an entirely new product.

Meet Caff Plus: A New Spin on Smooth Energy

In mid April 2019, NutraBio released Caff Plus, a smooth caffeine and theanine formula for energy and focus.

With Caff Plus, the idea is simple: clean, jitter-free energy and focus without a crash.

Keeping the formula uncomplicated is where the magic lies. We have two forms of trademarked caffeine plus a nice dose of TheaPure trademarked l-theanine as well. With a proper combination of the three, NutraBio has given us the perfect way to make sure you stay energized and focused throughout the day, no matter when you need it.

The label and research behind the Theanine + Caffeine synergy is below, but first, check the deals on PricePlow and sign up for our NutraBio news alerts, since you never know when a new product, flavor, sample, or giveaway is going to drop:

Two forms of caffeine yielding 150mg total, and trademarked L-theanine at 200mg. It doesn’t get much smoother than this:

Easy energy and focus. What’s there not to like?

Stack with Alpha EAA and you’re off to the races!

With a short and simple, but effective list of ingredients, PureCaff is lined up to be yet another great product by the masterminds over at NutraBio. Using only premium and trademarked ingredients, Mark Glazier and team put together a capsule formula that will serve as an amazing afternoon pickup for those that need a jolt of energy partway through their day, but also won’t give users a terrible crash after using it.

For a simple workout focus stack, we’d tack this one onto Alpha EAA and be off to the races!

We love seeing the new things NutraBio has been putting out recently, and this is certainly no exception.