A new study on elevATP confirms initial projections of the ingredient as a true all-natural athletic performance enhancer, and it does so… by elevating ATP levels!

Many of you out there have likely come across the new strength boosting ingredient named elevATP in some of the newer pre workouts and muscle builders hitting the market. If you’re not too familiar with it, elevATP is a patented ingredient from FutureCeuticals that combines ancient peat with a proprietary apple extract.

It’s touted to provide a number of proven benefits, but the initial research on it all revolved around increased ATP production and release, nothing directly on athletic performance.[1,2,3] However, things are changing as more studies are beginning to come out on the new ergogenic. The latest study on the novel compound documents significant gains in strength, power, and performance in trained men.[4]

25 healthy, resistance-trained men with a mean age of 28 +/- 5 were recruited for the study and randomly assigned to consume 150 mg/day of elevATP or a placebo. To be eligible for the clinical trial, each participant was required to be capable of lifting 1.5x their bodyweight in the squat and deadlift, and 1x bodyweight in the bench press. 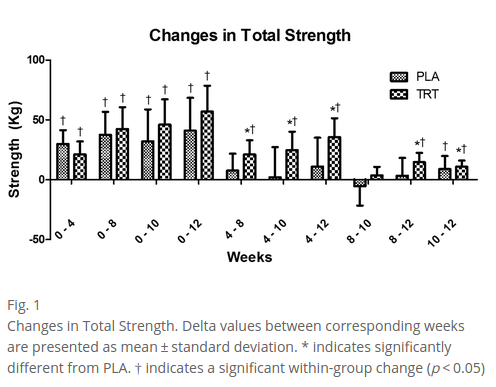 This graph shows the increases in strength for the group receiving elevATP (TRT) and the placebo (PLC) group.[4]

So as you can see, these guys were definitely already trained, and therefore “newbie gains” could not be the explanation for any positive showing from the supplement. Most newbies aren’t benching their bodyweight and definitely aren’t squatting 1.5x.

Additionally, the participants were prohibited from using any supplements not provided in the study except for a multivitamin or protein powder, which they were not allowed to consume within 2 hours before or after resistance training sessions.

Subjects followed a resistance training program under the guidance of a certified strength and conditioning specialist 3 days per week for the first 8 weeks of the study, followed by a 2 week overreaching phase (weeks 9 & 10) and a 2 week taper phase (weeks 11 & 12). During the 12 week trial, peak power, average power, and average speed were recorded. Measurements were taken at the beginning of the trial, and then repeated at the 4, 8, 10, and 12 week mark. 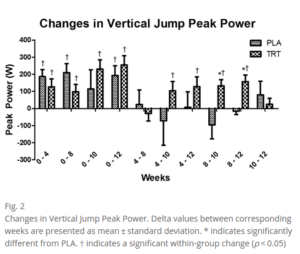 Not only did elevATP increase total strength and lower body strength, but it also improves vertical jumping power in athletes.

It is important to note that elevATP seemingly had no statistically significant effect on bench press 1RM, though.[4]

At the conclusion of the trial, researchers noted,

“This is the first study examining the ergogenic potential of endogenous ATP enhancement with supplementation. The proprietary blend of ancient peat and apple extracts were capable of increasing lower body and total strength as well as lower body power output compared at an equal-volume, visually-identical placebo.”

Lastly, the team of researchers observed that elevATP prevented performance decrements (i.e. “overtraining”) that can potentially go along with increased training volume and overreaching (or sometimes just undereating). 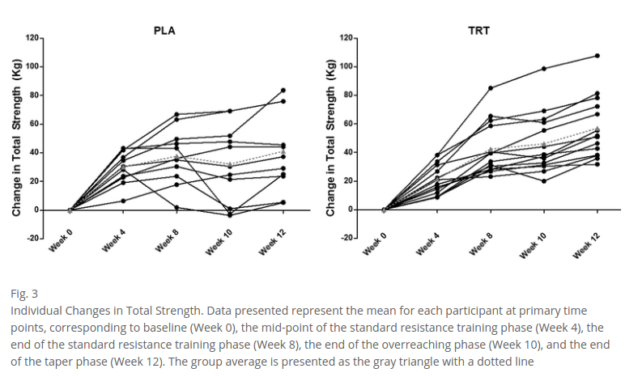 Individual Changes in Total Strength. The trend is your friend!

Where to go from here?

So we’ve piqued your interest in elevATP, and you’re ready to put it to the test, but you’re not quite sure where to look.

Well, for starters, you will want to use a product that contains the research-backed dose of 150mg/day of elevATP and consume it pre workout. Fortunately for you, we’ve covered several of these here on the blog and the following posts are all about products containing elevATP:

How is it different from Peak ATP?

No doubt you’ve also come across another ATP enhancing ingredient called PeakATP. You may be wondering what’s the difference between this and elevATP, if there is one.

Well, on the surface, both have the same end result: They increase extracellular levels of ATP.

PeakATP is another ATP enhancing compound that is comprised of a slightly different make than elevATP and needs a much higher dose to be effective.

However, the difference between the two is the ingredients they are comprised of. elevATP is a combination of extracts of apple and ancient peat, whereas PeakATP is a disodium salt of ATP.

The sales point for elevATP is that the bioavailabily and processing by the body can’t isn’t exactly “optimal” when directly taking ATP, as is the case with PeakATP, meaning you don’t get the full benefit. elevATP, however, is incredibly bioavailable and can accomplish the same claimed results as PeakATP (greater strength and power, increased lean body mass, etc), but at a lower dose. The clinically studied effective dose of elevATP is 150mg, whereas PeakATP is 400mg.

Further, Peak ATP has been gobbled up by some of the bigger supplement manufacturers, which are selling it for more money. elevATP seems to be coming in cheaper, at least from our perspective where the final product prices stand.

Overall, we’re more inclined to side with using elevATP for these reasons, but may need to experiment some with PeakATP to see how it performs.

We’re all familiar with the tried and true muscle builders in fitness, such as creatine, betaine, and beta alanine, but there’s a new era of all natural next-gen muscle builders that have started to come out the past year or two that show great promise. The initial research on elevATP hinted at a compound that could promise a wealth of rewards for the user, and now with this latest research it’s all but confirmed that the increases in ATP found in the initial studies directly translate to athletic performance.

If you’re already using the standard strength boosters, but looking to crank things up just one more notch, grab one of the products mentioned above and await the epic gains in strength that will be headed your way!