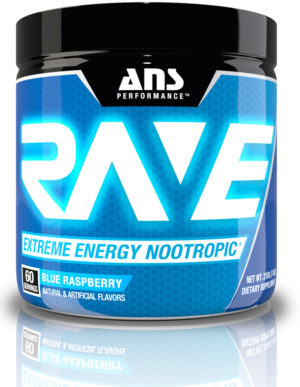 ANS Performance is a company that’s synonymous with formulating top of the line products such as their longstanding hit pre-workout, RITUAL. We’ve seen them continuously trickle products like the N-Pro protein powder, as well as a few now-discontinued fat burners (like Diablo) and everything in between since that RITUAL launch.

Get Ready to Get Focused

But one area that many sports nutrition don’t touch are the nootropics, or cognitive enhancement supplements. The market for these “brain boosters” is exploding, much of the competition formulating products solely around energy and focus which could be used by lifters, gamers, or even office workers that have long work days.

ANS Performance’s RAVE is ANS’ entry into this booming niche of the market, and it’s extremely unique, very well loaded, and at 2 scoops, it looks untouchable!

The new key ingredient is “MagicLion” alongside a small dose of DMHA — if you’re not sure what these are, then keep reading. We’ve got the full breakdown below, but before we get to it, you gotta check the RAVE deals (coupons included in the prices) and sign up for PricePlow alerts:

RAVE is absolutely loaded with all sorts of nootropic agents to channel the energy you’ll get from its rather impressive energy matrix. We could see this being good at one scoop for the low-stim crowd, but will really shine at the 1.5-2 scoop mark for high stim fiends or preceding a really tough workout.

Note: Doses listed below are for 1 scoop 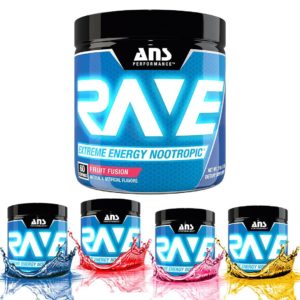 Rave comes in 4 unique flavors to quench your thirst for energy and focus.

ANS isn’t short on options for flavors with their newest supplement. Rave will come in the following flavors:

Another great thing — there’s no artificial colors in ANS RAVE, so those of us with any allergies to them can breathe a sigh of relief.

But that doesn’t mean it’s colorless! For instance, spirulina is used to give the Blue Raspberry flavor its color.

Do not exceed 1 scoop with first use of product. Assess your tolerance to RAVE prior to increasing dose. Dose may be increased up to a maximum of 2 scoops (7g) for extreme focal intensity (mixed in 10-12oz water).

Do not take within 4 hours of intended sleep.

RAVE is another solid offering from one of the best companies in the business. The combination of nootropics, caffeine, and DMHA should make for an incredibly energized and focused euphoria that will have the user powering through whatever task they are performing, whether it be gaming, work, or working out.

The mental productivity market is starting to get very, very crowded and it’s going to take some serious discernment on our part to come up with a Top 10 list of these!