THE Coffee Boost by Myprotein: Not Your Average Cup of Joe 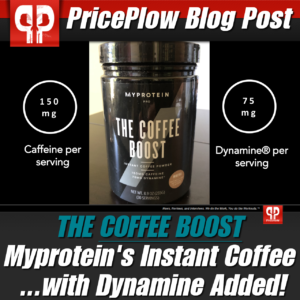 Myprotein is here to save your mornings with THE Coffee Boost!

Ever since Myprotein landed in the states, they’ve been drastically expanding their line of products. Although most well-known for huge selections of protein powders, that’s not all the brand has to offer. Myprotein seems to be putting a big emphasis on functional foods lately, with the release of the Triple Stack Bar, Myprotein Protein Pancake Mix, and even FlavDrops. Just like their European product line, they’ve branched out in a big way, and it’s a smart move since they already have the protein powder category nearly maxed out!

One of Myprotein’s best selling lines is The Pro Range, which features products with advanced formulas for those looking to get an extra edge. This range already has some of the main categories in sports supplements covered, such as protein, pre workout, and amino acids. However, Never satisfied, Myprotein has launched its latest addition to The Pro Range lineup: THE Coffee Boost!

THE Coffee Boost: Supercharge Your Morning 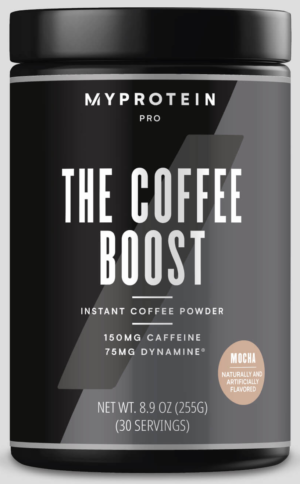 THE Coffee Boost has a unique combination of 150mg of caffeine and 75mg of Dynamine.

This is why it’s normal to have at least 2-3 cups of coffee per day. However, that can quickly build up your caffeine tolerance, and there’s only so much you can up before the “cons” start to outweigh the “pros”.

Fortunately, Myprotein formulated THE Coffee Boost to be the perfect solution to your problem! Along with containing 150mg of caffeine from premium Columbian Coffee, it also has 75mg of Dynamine, a potent “neuroactivator” that works synergistically with caffeine to boost energy and mental focus!

In addition, THE Coffee Boost is vegan-friendly, contains no sugar, and is low calorie, so anyone can enjoy it! It has a relatively simple formula, but it’s also quite unique – we’ve never seen anything like this before!

Let’s get into the science behind THE Coffee Boost, but first be sure to sign up for our Myprotein alerts, as we’ll be hitting up some giveaways and they always have exceptional deals going on! 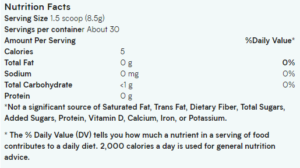 At only five calories, THE Coffee Boost is a perfect way to kickstart your day!

THE Coffee Boost only contains three ingredients: instant coffee, natural and artificial flavors, and methyliberine (as Dynamine). Furthermore, it’s very easy to make — all you need to do is add hot water. THE Coffee Boost clocks in at only 5 calories, with less than 1g of carbohydrates and zero fat or sugars! Since THE Coffee Boost contains minimal calories and naturally gives you a steady increase in energy, it would be a great option for fasting and curbing your morning appetite.

This unique combination of two ingredients enhances energy, mood, and focus! Let’s see what this dynamic duo of ingredients are capable of — here’s what one serving (8.5g) of THE Coffee Boost contains:

THE Coffee Boost contains just five calories coming from 1g of carbohydrates. However it is flavored, so you may not even need to add any sweeteners or creamers to it. But… if you are looking to mix it up, we highly recommend picking up Myprotein FlavDrops. 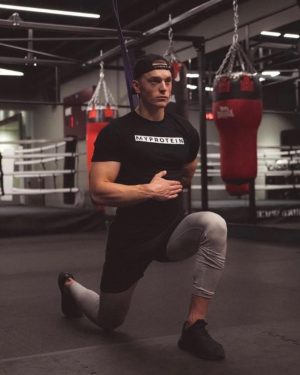 They are a zero calorie flavoring agent that can transform the taste of any food or beverage. FlavDrops come in several flavors such as vanilla, white chocolate, chocolate, and maple, making it a great addition to THE Coffee Boost!

Here’s an updated list of THE Coffee Boost available flavors:

Stacking-wise… we love high quality MCT Oil in the morning (Myprotein has THE MCT Boost or their Caprylic Acid softgels). For the adventurous athlete, you could even use THE Coffee Boost pre workout and stack it with a non-stim pump product, the possibilities are endless!

Further, if you want to create an epic breakfast stack, then pair THE Coffee Boost with Myprotein Protein Pancake Mix! With the combination of caffeine, Dynamine, and a hefty dose of protein, you’ll be ready to tackle whatever the day has in store!

THE Coffee Boost is a short, simple, and yet effective product! It will be the perfect addition to your morning routine, especially on those days where one cup of regular coffee just doesn’t cut it. With the combination of natural caffeine and Dynamine, it will be your secret weapon for being more productive throughout the day. 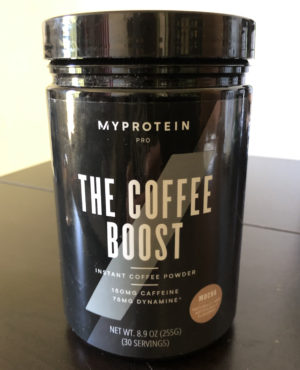 THE Coffee Boost is a simple, yet extremely effective product!

THE Coffee Boost can even be a great option for pre workout, especially if you stack it with a non-stim pump product. Myprotein formulated THE Coffee Boost to be superior to your average cup of joe — you really just need to try it for yourself to see what this epic combination of ingredients can do!

Myprotein continues to release innovative products and we couldn’t be more excited to see them expand their offerings in the States. They’ve dominated the UK market for years, but now Myprotein is on a mission to expand their reach, and the U.S is a perfect place to do that. So far, they’ve been having great success, which means you’ll be seeing a lot more to come from this industry leader.

Stay tuned to PricePlow, because we’ve got giveaways, reviews, and deals all on the way from Myprotein! Lastly, if you want to try out THE Coffee Boost or any other of Myprotein’s supplements, use PLOW40, to save 40% off!