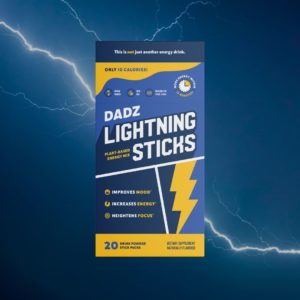 Here on the PricePlow blog, we typically cover the latest protein powders, pre workout supplements, nootropics, and amino acid formulas that enter the market. What do all of these have in common? They are all primarily geared towards optimizing sports performance. However, there are several ingredients in the dietary supplement industry that can be used for a variety of purposes, and no one highlights that better than DADZ!

DADZ is one of the newest companies to enter the supplement industry in 2020, and they’re doing things right by using some of the highest quality ingredients available from top-tier companies like Nutrition21. DADZ was co-founded by Max Greenfield and veteran consumer goods entrepreneurs — Mike Constantiner, Dan Suski, and Russ Wallace.

Max is a father of two and understands the challenges that come with parenting. He embarked on a mission to create a product that would help other dads overcome any obstacle that comes their way, enabling them to be the best dad possible for their children: introducing the DADZ Lightning Sticks!

“We’ve been neck-deep in the trenches – peed on, pooped on, and puked on – and that’s just this morning’s diaper change. But we also know that being a Dad is the most important, exciting and straight-up fun challenge that we’ve ever taken on. And we aim to celebrate and support that.

DADZ is all about fun-loving, healthy, performance-minded products for Dad and baby that let you know that we see you, Dads, and we have your back.”

DADZ Lighting Sticks: Made For Dads, By Dads

DADZ Lightning sticks feature an extremely effective list of ingredients that are designed to increase your energy, mood, and focus. With just four key compounds — gelatinized maca root (as Lepidamax), inositol enhanced bonded arginine silicate (as nooLVL), organic lion’s mane, and caffeine from green coffee beans, the DADZ Lightning Stick gives you the boost you need to power through the day. 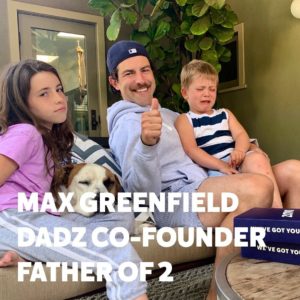 We’ve written about every ingredient included in this product at some point on the blog, but this is the first time we’ve seen them all used in one comprehensive formula. Not only is DADZ using well-researched ingredients, they made sure to include the clinically-studied dose of each one so you get the most out of this supplement. The Lightning Stick is portable, easy to use on the go, naturally flavored, works quickly, and sustains energy levels for hours.

In addition, DADZ donates a portion of the proceeds to charities and organizations that support families. Most notably, they partnered with Fathers Incorporated — a nonprofit organization that works to build stronger families and communities through the promotion of responsible fatherhood.[1] This is known as “DADZ helping Dads”. By purchasing the Lightning Stick, not only are you getting a well-formulated product, you’re also helping out others, which is an incredible way to give back.

Everything you need to know about DADZ Lightning Stick is included down below, but before you read any more — sign up for PricePlow news and deal alerts to stay up to date with everything going on in the supplement industry!

As mentioned above, DADZ uses top-shelf ingredients, including Lepidamax and nooLVL from Nutrition21 to create their Lightning Sticks. This combination caught our attention straight away. The Lightning Stick also has a fully disclosed label so you know exactly what you’re putting into your body. This shows us that DADZ is transparent, honest, and is using efficacious dosages — everything we like to see in a supplement company!

Although the Lightning Stick only has 50mg of caffeine, that’s just enough to give you a slight energy boost, mentally and physically. Furthermore, there are several other ingredients that enhance energy, mood, and focus even more. Without further ado, let’s dive right into what the Lightning Stick has in store for all the dads looking for an extra edge!

DADZ Lightning Stick is naturally flavored and colored, vegan, non-GMO, gluten-free, allergen-free, and uses recyclable packaging. Furthermore, it’s sweetened with a blend of allulose and stevia leaf extract (no artificial sucralose or ace-k!). Allulose is a low calorie sugar alternative that has no blood sugar impact. While it adds roughly 5g of carbs per serving, it does not behave anything like sugar, so we don’t feel there’s anything to worry about — even for low carb dieters!

The Lightning Stick first launched in one refreshing flavor — Natural Black Cherry — but with how popular this product is becoming, we expect a lot more flavors to be added in the near future!

Below will be an updated list of all available flavors for DADZ Lightning Stick:

DADZ Has Your Back, So You Can Have Theirs!

For all the dads out there that need an extra boost, the Lightning Stick is a great product to try out! Their team did an excellent job formulating this supplement, it’s simple, effective, dosed well, and includes some of PricePlow’s favorite ingredients from Nutrition21 — Lepidamax and nooLVL. Even though DADZ just arrived on the market, they’re definitely doing things right by using fully transparent labels, giving back to organizations in need, and partnering with some of the top ingredient suppliers in the industry. 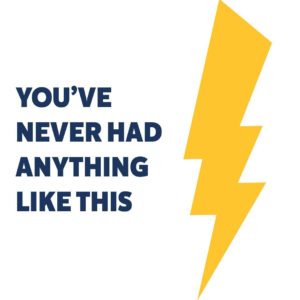 DADZ Lightning sticks are truly one of a kind!

Nutrition21 leads the way in ingredient research and development and you can be certain that when you see their logo on a product that the company is giving you the highest quality ingredients they can source. Although we’ve seen each ingredient included in the Lightning Stick across several product categories — nootropics, pre workout supplements, gaming supplements — they’ve never been combined in this way.

In an industry that can seem very saturated it’s crucial that new brands do things differently and DADZ has definitely accomplished that. They’re even targeting a specific audience which we rarely see in the industry — dads who are doing everything they can to balance work, physical activity, and fatherhood. It’s definitely not an easy task, but at least the Lightning Stick is here to give you some assistance. This is just the beginning for DADZ, so make sure to subscribe down below to see what they come up with next!