For many of us, life is pretty rapid-fire; we need to balance work, family life, and errands, hopefully while sneaking in a workout somewhere! This pace often throws us into a whirlwind, messing up our mood and the hormonal mechanisms that control them. Practices such as mindfulness or meditation are constantly shared with the hopes of improving one’s mood. Sometimes, however, stress is more physical than that, and a quick breathing exercise just might not be enough. 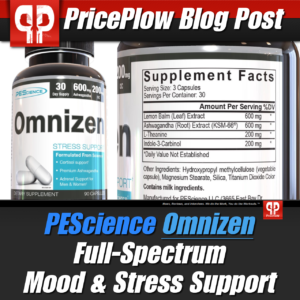 PEScience has been around for quite some time, and have proudly entrenched themselves among the leading companies within the supplement industry. Their reputation is exceptional – each product they release is excellently formulated, science-backed, and effective, accompanied by a touch of eccentricity tied to it. While their energy formulas and proteins are impressive (such as their new Alphamine Capsules and Cake Pop flavor of Select Protein), they’ve recently decided to dive into more body and mind health with products such as Symbiont GI and TruNeuro.

Beyond the athletic and cognitive supplements, the brand is also entering the massive market for mood-boosting supplements. Luckily for us, in PEScience Omnizen, they’re living up to their reputation, truly offering something special. This comprehensive, multi-branched mood-enhancer separates itself by working in a variety of ways, ultimately leading to a healthier overall well-being! Say goodbye to frantic stressing and overthinking, and welcome in a peaceful zen!

In this post, we’re going to take a deep dive into Omnizen, covering every ingredient used to deliver that relaxed state we all desire. We’ll also cover the advantages this offers versus other options out there that claim to have similar effects, while maybe even dispelling some of those assertions. But, before we get into all of that, be sure to subscribe to PricePlow for all of the supplement news, reviews, deals, and diet information you could ever want!

So, what exactly does being “stressed out” do to us?

Before you start taking a formula to combat the symptoms of stress, it’s important you know what stress is and can do in the first place! 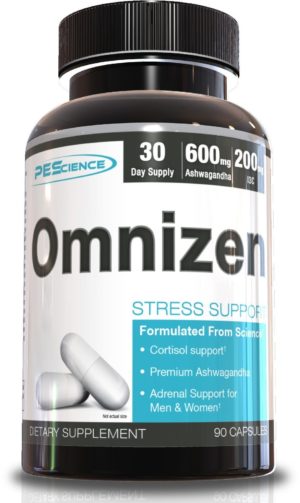 Our hormones, which are excreted by a series of glands collectively referred to as the “endocrine system”, help regulate virtually every bodily process you could think of. Each specific gland controls a particular set of hormones, which in turn serve distinct purposes. The adrenal glands, which are located on the top of each kidney, regulate the body’s metabolism, immune system, and responses to stress.[1]

Although the body is a fine-tuned machine, things can get out of whack sometimes. Life happens, and how we respond to various inconveniences has a massive effect on our adrenal glands. When something “stresses us out”, our pituitary gland signals our adrenals to produce cortisol – the hormone that controls stress.[1] Despite getting a bad rap, cortisol is actually pretty essential. It controls how we use macronutrients (proteins, fats, and carbohydrates), regulates blood pressure, controls blood glucose levels, and regulates sleeping patterns.[1] Pretty influential right? That’s exactly why things can get so problematic when it’s out of sync.

Cortisol helps trigger the “fight-or-flight” response to perceived dangers,[2] by way of increasing levels of the hormone. When we produce too much cortisol, some nasty things can happen, such as weight gain,[2] high blood pressure,[1] reduced insulin sensitivty,[3] poor mood, and loss of sleep. Alternatively, even lack of sufficient cortisol is problematic, leading to tiredness,[2] nausea,[2] persistent pain,[2] and weight loss[2]. As you can see, it’s crucial that we maintain optimal cortisol levels, which is much easier said than done. Most people tend to have issues with high levels of the hormone, which is where most mood-enhancers, such as Omnizen, come into play!

Let’s get into the formula, breaking down what you’re getting in each three capsule serving of Omnizen!

The above ingredient analysis is based upon a full 3-capsule serving of Omnizen. You can start lower and take 1-3 capsules, preferably with a meal, when you think it’ll be best served. 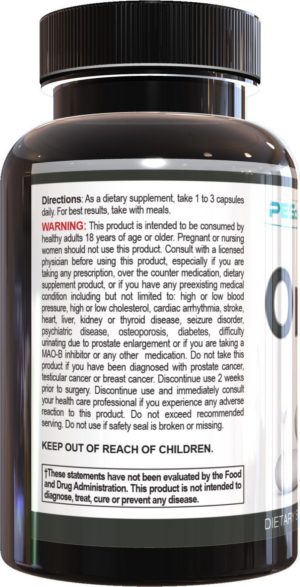 Three capsules is the full clinical serving, but you can space them throughout the day with meals.

This could double as a sleep aid / relaxant before bed, so consider saving one of your capsules for pre-bed use to get a better start on the day!

Doing it without CBD

PEScience makes a note that this is a supplement meant to target the CBD-chasing crowd, but with more research involved – and more legal compliance too. This is something to consider for those interested in CBD but not yet convinced it’s all it’s cracked up to be – or for cautious retailers who still won’t carry it.

It’s simply way too easy to get stressed out these days. Some of us are working long hours, others may be raising kids, and some people are trying to earn a degree. Whether you’re a parent, student, or just a plain ol’ adult, you must make sure you’re doing things to keep a healthy headspace.

Meditation works, but some people have trouble finding adequate time or space to correctly practice it. Other things, like mindfulness and positive reinforcement are great too, and we highly recommend that you give them a shot. But, sometimes a little extra push into a stress-free, calming environment can work wonders.

In Omnizen, PEScience isn’t pulling any punches – when they say they’re delivering a comprehensive mood-booster, they mean it! This formula attacks the things that can mess up a peaceful well-being from multiple different angles. Ensuring your cortisol is in check, optimizing overall hormonal levels, and inducing a bit of calmness are just a few things this stuff can do for you. But, most importantly, PEScience is giving you this label so that you can finally reach your zen!