Posted on June 28, 2018 by Mike Roberto | 4 Comments
Notice: This supplement has unfortunately been discontinued. We are leaving this post up because the formula is interesting, especially the research on Magtein. You will need to find these ingredients elsewhere, however.

Do you find that aging hasn’t been kind to your brain? PEScience answered your plea for help with a new product in its “Tru” Line, TruNeuro, but its only here for a limited time (unless all of us Gen-X’ers and Boomers buy it up like crazy!) 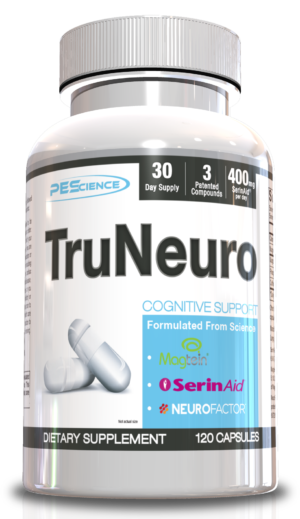 As you age, your brain ages even more. TruNeuro was designed to prevent the decline with three amazingly-dosed ingredients that can be taken “forever”.

2018 has been a good year for PEScience. The uber-soft Select Protein Bars can hardly stay in stock, and Symbiont-GI was a most unique industry development that nudged the brand away from sports nutrition, but it was something they developed for personally “selfish” reasons.

It looks like their innovation train is still running – and once again, we have one that’s not meant for the typical “18-34 year old bros” that the company was founded on. Instead, this is a cognitive supplement that will work best for those beyond that age:

PEScience has developed a new cognitive-enhancing supplement based in neuroprotection and anti-aging, and it’s one that can be taken every day for a long time. While the product is a limited run, it is another sign that the company is seeking to expand outside of its traditional boundaries… and if they have more “wiser” customer than they realize, they could turn this into a full-blown product launch.

TruNeuro relies on just three trademarked ingredients, and one of them is fascinating… but not cheap. The label may confuse our nootropic obsessed followers as there are no “traditional” nootropic ingredients present in TruNeuro. However, we must keep the purpose of this product in mind. They developed TruNeuro to maintain brain health as we age, not to make our minds run like a short-distance bullet train.

We want ingredients that optimize our natural functioning. So let’s show the prices (or sign up for alerts if not in stock) and then hit up that ingredient list!

Note: The following ingredient doses are based upon an entire day’s supply (four total capsules), but it’s meant to be taken twice per day, two capsules at a time. So we’ve doubled what’s on the label to show you your final daily values. This yields a 30 day supply.

What you’ll notice here are three ingredients that can be used every day, forever. We’ll get into that after the analysis:

What? Where’s the “regular” stuff?!

Wait, no choline?! But it seems like PEScience loves their citicoline, so why not put it in here?

We asked that question and they generally answered: Because high doses of choline are for acute uses – perhaps weeks or even months at a time at most — but according to the brand, if you take too much for too long, you’ll eventually experience side effects. 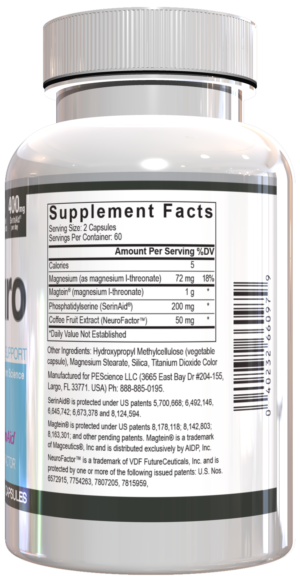 The complete TruNeuro side label

The same goes for Huperzine A, another common cognitive-enhancing ingredient that plays “defense”. We love to temporarily use it to dampen the effects of acetylcholinesterase to keep acetylcholine around longer for a workout or a study session, but do that all day every day and you’re asking for headaches.

TruNeuro was meant for long-term use, and it’s meant to supplement whatever else you may be acutely cycling in at the time. This is the nootropic that has what other general “feel-good” nootropics don’t typically bother with, and that’s why it will fit in nearly any stack.

So the question remains – if it’s meant to be taken forever, why only tease a limited-time release? The answer is — because they made it for themselves first and foremost, but if everyone does want to get in on it and its hefty price tag, then maybe they’ll keep it around or make it in spurts.

PEScience changes with age, and they’re bringing their brains with them

PEScience has been around for a while, and it’s clear that they’re allowing themselves to “age gracefully” out of the “hardcore” bodybuilding and sports nutrition space they started in. The additions of Vegan Select Protein, Symbiont-GI, and reformulations of Alphamine were indicative of that, and TruNeuro is even more so.

We love it when a company’s okay with aging its product lines along with its original customer base — and its employees. There will always be a new batch of 25 year olds to come and take the bodybuilding helm, but it’s nice to see an intelligently-run company with clean formulas that’s catering to the space in the middle of “elderly” and “20 year old bro”.

Aging with grace and class, and putting out amazing formulas for all kinds of people! See our coupons to save on PricePlow.com/pescience

So as close followers of PEScience, we’re selfishly happy to see them growing alongside us.

TruNeuro focuses on neuronal protection only and pulls it off with just three amazing ingredients at incredibly solid, yet expensive dosages. If you’re in that middle-aged bracket, love nootropics, and have a solid bit of bonus cash, we are all for you copping a bottle of the initial run to encourage the crew at PEScience to continue producing such novel products. They’re not the only ones who need them.