In 2018, the gut is king. Poor gut health is linked to a new terrifying prognosis almost by the day. Depression, acne, digestive upset, and even chronic stress can arise from unhealthy gut microbiota. The abundance of inflammatory foods, toxic pesticides, and artificial colors and sweeteners have wreaked havoc upon our collective gut microbomes, and this has forged a whole new area of research and market of products meant to help fix the problem. 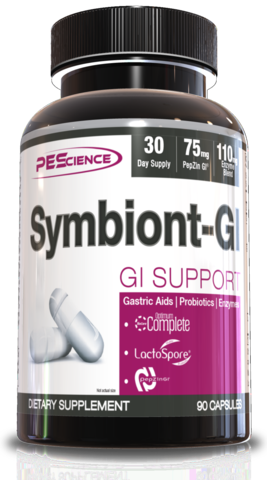 PEScience steps away from sports nutrition to bring symbiosis to your gastrointestinal system with Symbiont-GI, a brilliantly formulated GI support supplement

PEScience, most commonly known for their incredible protein products (as in Select Protein, Vegan Select Protein, and Select Protein Bars) as well as workout supplements (such as the Alphamine “athlete’s energy drink”) has tackled this issue with an exciting new product: Symbiont-GI.

This unique and well-rounded supplement hits many angles for several different types of “digestive sufferers”:

This is unlike any of their other products, but it may in fact be the most truly beneficial one to those who really need it. However, is it good enough to bring balance — or symbiosis — to the gut!?

We have all the deals below, but first you can check PricePlow’s coupon-powered prices and sign up for PEScience news alerts because this brand has been on absolute fire lately, and you won’t want to miss what’s coming next:

The history of this supplement is selfish. Symbiont-GI arose as a personal supplement, as PEScience’s formulators devised it for their own digestion issues. However, it was so successful for their GI issues that they had to release it to the marketplace. Now that it’s been a couple of months since its release, we’re told that it’s been working so well that PEScience’s customer support team are receiving all kinds of fun success stories from happy customers.

Built for themselves, but manufactured and sold for you

Symbiont-GI is an aggressive, full-spectrum supplement since they’re not targeting a specific gut condition. Instead, they’re focusing on general gut health, but with many ingredients that target a few specific conditions (like ulcers and IBS). While the research on gut health is still in its infancy, there are ingredients that certainly have promise.

Knowing PEScience, they’ve likely done a serious amount of homework on the current gut-health literature. We can talk all we want about how good this is in theory, but where does the current research land? Let’s analyze each ingredient specifically: 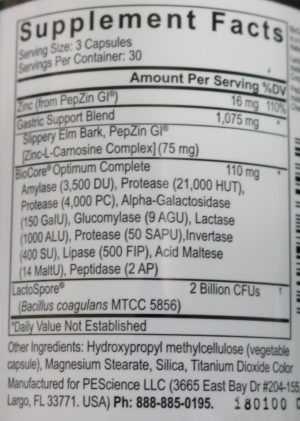 Symbiont-GI covers a lot of bases, but first we need to discuss why they need such a powerful form of zinc!

PES goes on the record

After we published this analysis, PEScience wanted to add some commentary:

Symbiont-GI is one of our favorite creations. We made it for ourselves, and figured we’d share with the masses after everyone in the company saw such great results from it. Tons of people have GI issues but it’s one of those things that’s kept on the hush because it’s an embarrassing topic. Now that people have been on Symbiont for a month plus, our CS team gets to hear all the lovely GI success stories! The reviews we have seen come into our website confirm the success people are having.

The goal of the product is an an all-around approach. The enzyme research is super fascinating. We were wanting an all around top-notch enzyme blend, and partnered with a company that are experts in digestive enzymes for the most complete blend. Since GI issues can be caused from a number of different things we wanted a well rounded product suitable for everyone.

“Symbiont-GI” was the name we went with because our goal was to make a product that could have everyone’s GI tract working in symbiosis. From one end to the other, we want that intestinal flora to work its best. 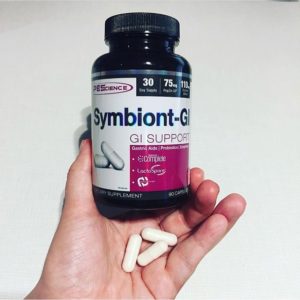 Three capsules a day for 90 days is the dose behind the LactoSpore research, and will keep you at 100% zinc needs!

Take 1-3 capsules daily, best with meals (we suggest “at first bite” to get the digestive enzymes ready to go sooner than later.

The max dosage of three capsules will make the bottle last a month, and that’s probably the best way to start. If you’ve had success, you may be able to “cruise” with one or two capsules daily after that first month or two… but don’t mess with success too much!

We love it when sports nutrition brands branch out and crush it in alternate markets where “normal” folks hang out. PEScience has some master formulators, and it shouldn’t only be athletes who get to benefit from their brains.

Symbiont-GI has us excited for the future of gut health products. Only a few years ago, the research on probiotics and digestive enzyme products was “Mad Max” in nature. As the medical field realizes the importance of a healthy gut and enteric nervous system, we will see the dietary supplement industry take on this new frontier. For now, PEScience may rule supreme in the gut health arena with this product – and this is a brand that’s not yet known in the “general health” realm. We’ll take our sports nutrition experts against those from other market niches any day of the week.

Symbiont-GI is a triple threat: inexpensive, effective, and scientifically supported. At 25 dollars a bottle, we recommend that anyone with digestive issues… or hell, anyone at all, give this product a shot. You have nothing to lose but some bad gas.