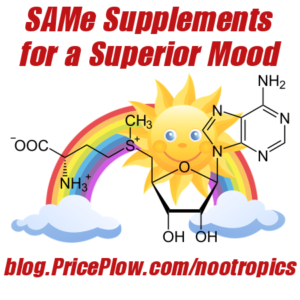 Are you feeling alone? Do you find yourself not enjoying the things you used to? Is your life nothing but an endless stream of stress, frustration, and depression? Well, then we may have found the solution for you!

No, this isn’t the beginning of some late night television commercial advertising a testosterone booster or pharmaceutical prescription for depression. We’re here to talk about an all-natural compound present in your own body that may be the fix you need to improve mood and cognition all at the SAMe time.

We’re talking about S-Adenosyl Methionine, a nootropic that might be the key to ending depression and the declining mental function associated with it. It’s pricey, but to many, it’s a Godsend.

We must emphatically state not to mix this with prescription drugs – especially stimulatory ones, antidepressants, or MAO inhibitors. Combining such an ingredient with a pharmaceutical drug could have disastrous results.

No statements on this page have been approved by the FDA, and you must always get your physician’s written consent that you have a clean bill of health before using any such supplement, especially if you have a mood disorder.

S-Adenosyl Methionine (SAMe) is a naturally-occurring chemical in the body made from methionine that regulates several important functions in cells. It’s also sold as a dietary supplement and can be found under several of other names including: 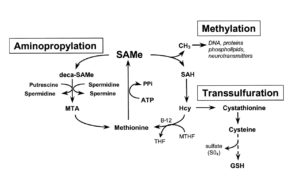 SAMe was discovered in 1952[1] and after first caught the attention of researchers when abnormal levels of the compound were documented in patients diagnosed with depression and liver disease. This inevitably led researchers to test if treating patients with SAMe might be useful, and indeed it was. Following decades of research SAMe has found extensive use as a treatment for all sorts of things including dementia, liver disease, osteoarthritis, vacuolar myelopathy, and most notably, depression.

How Does SAMe Work?

SAMe is a simply methionine bonded to a molecule of adenosine triphosphate (ATP). It’s found every living cell of the body, where it functions as a methyl donor, taking part in over 100 different reactions.[2,3] Basically, SAMe floats around the body donating methyl groups where they’re needed, acting as a metabolic “maintenance man” by preserving or accelerating various reactions in the body.

But that’s not all, SAMe also serves as a precursor molecule to the transulfuration pathway, which supports glutathione (an important antioxidant) synthesis, as well as the aminopropylation pathway, which leads to the synthesis of polyamines (organic compounds composed of two or more amino groups). As we mentioned up top, deficiencies of SAMe can lead to depression and a boatload of other ailments including osteoporosis, liver disease, etc.

How Much? SAMe Supplement Dosage 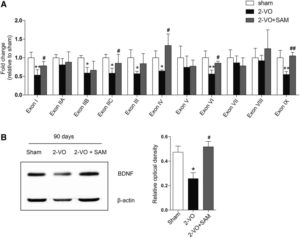 S-adenosylmethionine supplementation ranges between amounts of 600-1,200mg range spread throughout the day. It’s typically divided into 200-400mg doses and taken with meals.

For improving liver function or symptoms of osteoarthritis, they 1,200mg per day use is recommended. If you’re looking to beat the blues and combat depression, SAMe doses typically fall in the 200-400mg/day range for 15-20 days.

Note that if you’re using SAMe for osteoarthritis, it’s going to take a few weeks of use (minimum 4 weeks most likely) for the joint relief benefits to show.

Since so few people seem to have used this powerful supplement, we actually think it’s a great idea to use it “alone” at first, and by alone, we mean along with Vitamins B6, B12, and folic acid. The easiest way is to supplement a solid B-Complex vitamin when dosing SAMe, but make sure it’s a formula containing folic acid (Vitamin B9).

The reason for this is that if you don’t have enough folate or Vitamin B12 available in your body, the SAMe methylation process breaks down, which can result in brain fog, impaired memory and recall, pain, and even depression.[25]

However to stack SAMe, it depends on your goals:

SAMe is generally without severe adverse side effects. Mild ones that have occurred from time to time include nausea and GI upset.

As for long-term safety, that might be up in the air, as the human trials conducted on SAMe have all been relatively short, and involved smaller test groups. However, a human trial carried out over a 2 year period documented no significant side effects from the use of SAMe.[26]

That being said, if you are currently on any other medications for treating depression, bipolar disorder, etc. CHECK WITH YOUR PHYSICIAN before looking into ANY supplement! This is not one to mess with on your own, especially if you’re on prescription drugs!

Note that in the above quoted text, the researchers of this double-blinded study are actually citing another text,[27] but it is not open access so we do not have the half-life data available to public — you’ll just need to take their citation’s word for it.

If something’s missing from your life, and the typical run of stimulants aren’t getting the job, maybe this is what your brain’s looking for.

S-adenosylmethionine is an incredibly powerful compound in the body that impacts everything from mood to liver function and even joint mobility. Lacking in this essential compound can spell certain doom for your quality of life on multiple fronts, making the “same old, same old” feel incredibly taxing and daunting. However, supplementing with some extra SAMe might be what you need to feel better, move better, and think better each and every day.