Gotu Kola: An Herb to Improve Mood and Memory 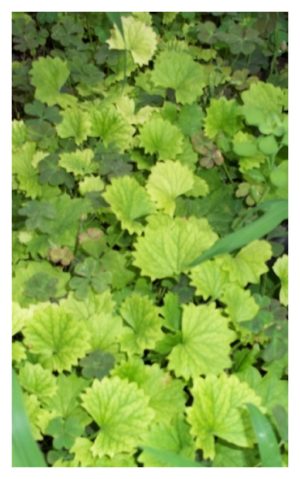 Gotu Kola is an old-world plant that’s been around for centuries and is experiencing a rebirth in the nootropics community for its cognitive and mood-enhancing benefits.

Despite the growing popularity of nootropics this past decade, some of them have been around for thousands of years. One of them is the age-old plant, gotu kola, long known to boost mood and brain function:

What is Gotu Kola?

Gotu Kola is an incredibly versatile, nutrient-packed herb used throughout Southeast Asia as a natural remedy for a wide range of illnesses and diseases due to its high content of triterpenoids and carotenoids:[1]

These compounds are believed to be the primary workhorses behind the numerous benefits of gotu kola.

A member of the Apiaceae family of plants, gotu kola is a green leafy vegetable that also contains all sorts of vitamins, minerals, flavonoids, polyphenols, and other phytonutrients, which is one of the primary reasons it has such a long history of use as a medicine. The plant is odor-free and ranges from mildly to slightly bitter.

Before going deeper, you can see all Gotu Kola products on PricePlow, or sign up for their price alerts below so you save with our price comparisons:

What does it do? 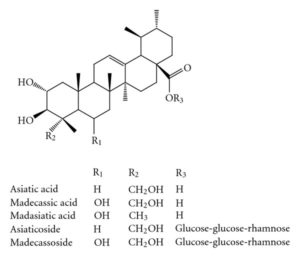 Here’s a close up of the triterpene in Gotu Kola primarily responsible for its nootropic benefits.

Gotu Kola is primarily used for its mood-enhancing and cognitive-boosting properties. Among the many compounds that are naturally-occurring in the plant are asiatic acid and madecassic acid. These two compounds are triterpenoids believed be responsible for the majority of gotu kola’s benefits.

These two acids, and their corresponding glycosides, represent about 2% of the total plant weight and about 25% of the total triterpenoids found in gotu kola. There’s also ursolic acid and rosmarinic acid in the plant as well, and several other ginsenosides that aren’t even found in any species of ginseng! FYI, ginsenosides are natural product steroid glycosides and triterpene saponins believed to the responsible for the multitude of benefits that ginseng has to offer.[2]

That’s not quite everything the herb has to offer, though — gotu kola has been shown to reduce anxiety, promote neurogenesis, reduce anxiety, and increase dendrite and axon growth in brain cells, which is something not easily accomplished in adults.[3,4,5,6]

For all these reasons, and more to come below, it’s easy to understand why Gotu Kola is referred to in Bali as the “student’s herb.”

As always, the focus of this article is on the nootropic benefits of gotu kola, but we’d be remiss if we didn’t at least list the numerous other benefits this versatile supplement has to offer. Other benefits attributed to gotu kola include: 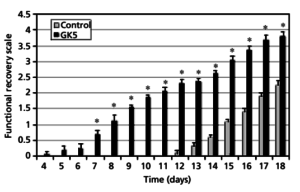 Most of the human research conducted on gotu kola has been on cognitive enhancers, therefore there is no “established” dose for proven cognitive boosting. However, rat studies have been done on cognition with the effective dose being in the 200-300mg/kg range. This gives a human equivalent dose of 32-48mg/kg bodyweight.

Based upon that, a general dosing strategy for gotu kola supplements tends to be on the order of:

Also, worth noting is that at high doses gotu kola can act as a sedative, and it’s often advised against using gotu kola in combination with medications that are used to treat anxiety or sleep disorders.[21]

As always, speak with your physician before starting any new diet or supplementation program, and do not mix supplements with prescription drugs unless given their written consent.

In vivo animal research notes that asiatic acid and madecassic acid, along with their analogs asiaticoside and madecassoside, have a bioavailability between 30 and 50%, this is somewhat on the low side, which means gotu kola could stand to benefit from some delivery technologies such as liposomes or cyclodextrins (or both).[22] 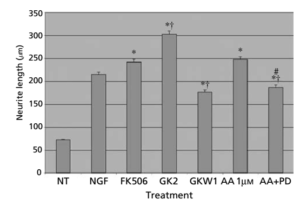 Figure 3 Mean values for neurite lengths obtained at 168h from SH-SY5Y cells in the presence of NGF, except no treatment (NT). Note that asiatic acid demonstrates significant activity, which is prevented by the MEK inhibitor PD 098059, demonstrating the involvement of the ERK pathway. In contrast, a water-soluble extract (GKW1) exhibits no positive activity, being significantly inhibitory of NGF’s activity.[13]

Generally speaking, gotu kola is pretty safe for most individuals. Human studies using a 300mg dose of gotu kola for 21 days found no side effects.[23] However, some people have reported experiencing low blood pressure, headache, dizziness, nausea, and/or drowsiness.

If you’re a normal, healthy individual with optimal liver function you should be ok using gotu kola, but if you have any pre-existing liver issues or diseases, it’s best to probably avoid it.

Time to get you some Gotu?

Gotu kola is an incredibly powerful and beneficial plant offering a wide variety of benefits to users. From neuroprotection to memory enhancement to improved mood and everything in between gotu kola is a very underrated nootropic that deserves a try at least once or twice in your biohacking journey.