Productivity supplements are making waves in the supplement world and Psyche from Antaeus Labs is a low stim option that works beautifully.

Aside from pre workouts and protein powders, there’s a certain category that’s seen another uptick in activity and interest: Productivity Supplements.

These supplements are exactly what you would expect, they help make you more productive during the day, i.e. more motivated, focused, and energetic to get work done.

We’ve previously covered Rich Piana’s Mentality, and we’re back today with another brain booster. But this one is WAY different, and has several different uses.

Antaeus Labs PSyche is a simple, blend of three synergistic ingredients to increase your productivity and help you feel more “in the zone” whenever you start to feel a bit lackadaisical. Because of its dosing, it has a ton of different uses, from standalone supplement to a stimulant “topper”.

Before we get to the breakdown, take a second to check the best deal and sign up for PricePlow alerts:

Unlike the majority of cognitive enhancing products on the market, PSyche has made use of a fully transparent label. And, unlike something like Mentality, it’s a relatively simple formula which makes use of the synergistic effects of just three ingredients.

Here’s the kicker: there is only 35mg caffeine per capsule. This seems weak, but is actually the magic of the formula once you figure out how to use it.

Note: Doses listed below are for 1 capsule.

Antaeus Labs sent me a few bottles, and at first, I thought, “what am I going to do with 35mg caffeine capsules?” 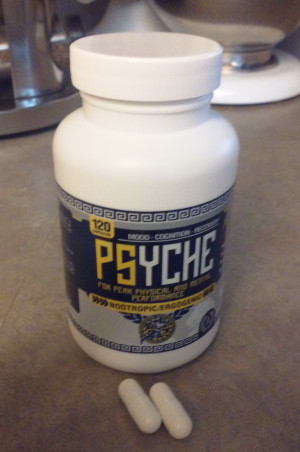 What am I going to do with a 35mg caffeine pill? EVERYTHING, apparently!

The answer to that is absolutely EVERYTHING. PSyche is such a perfect little versatile supplement, I can’t begin to explain how much I like it.

My most common use for it is as a “topper”. For instance, if I decide to drink some coffee in the morning, I’ll make a smaller cup and take a capsule alongside this. The PS and ornithine take some edge off.

But my favorite use is in the evenings. Just last night, for instance, I had a 7:30pm workout. Definitely too late to take down a full pre workout, but not too late for me not to get a little kick in. So I took some alongside a stim-free pre workout, and was golden.

Finally, I’ll also use it before going out to dinners or social events. I’m not a “social anxiety” person, but I’m not exactly always in the mood to deal with the nonsense of going out either. I find that PS and caffeine make dealing with idiots a better experience. Enough to get some energy, not enough to get nerve-wracking jitters. The PS makes a small difference.

1-2 capsules of PSyche has also become a better-feeling replacement for a diet soda. Just those mid-afternoons to get going but nothing insane – maybe enough energy to get you to your post-work pre workout dose.

I really do think everyone should have something like this in the house. Use it slowly, but it always finds a way to get a few capsules used up every week. Good, simple thinking, Antaeus.

I just hope the prices come down from what I currently see them at.

PSyche may be simple from its looks, but often times “less is more.” That couldn’t be more true here. A concise blend of proven ingredients will go a long way to improving your energy levels, increasing your alertness, and making you an all-around more productive and focused employee, father, husband, etc.

Next time you’re dragging, instead of grabbing yet another coffee, fat burner, or energy drink, try one of these productivity supplements and see what happens!