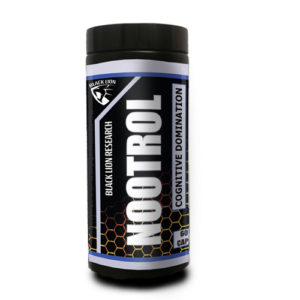 Known as a leader in innovation, Black Lion Research delivers a next-generation nootropic in Nootrol that looks to enhance brain function, IQ, focus, and mood!

With the nootropic market exploding, the amount of spam from low-quality manufacturers we receive is mind-numbing. More often than not, the typical nootropic supplement is solely focused on increasing levels of the “learning neurotransmitter” acetylcholine.

While in theory this is good, too much acetylcholine is not. One of the reasons many report negative side effects from nootropics is that there is an imbalance between acetylcholine and other neurotransmitters (dopamine, serotonin, etc). This leaves users feeling “brain fog”, lethargic, depressed, or worse yet, no libido! On top of that, research has shown that increased acetylcholine levels are indicative of assorted brain disease states, including Parkinson’s.[1]

So this one works a bit differently.

Black Lion Research have developed a powerful nootropic that looks to not only boost acetylcholine levels, but also provide a proper balance of all neurotransmitters to yield superior focus, cognition, and mental health.

We’ve got all the info ahead, but before we get there, take a moment to check the best deal and sign up for alerts from PricePlow:

Nootrol uses several intriguing ingredients (including several we’ve never encountered before!) to not only increase acetylcholine, but optimize levels of all the vital neurotransmitters to improve cerebral circulation, antioxidant activity and of course, focus and learning!

We reached out to BLR for comment on exactly what was the thought process behind the development and creation of Nootrol:

“Nootrol is a next generation Nootropic developed with the thought that most people can benefit from increased cognitive function and that the vast majority of nootropics available today either work poorly, have limited research, or are drugs that did not pass FDA approval for use and often have nasty side effects. Whats the point of increasing focus for a few hours if you have brain fog and negative cognitive effects later on as a result. Doesn’t sound very attractive. The goal was to deliver an innovative product with new ingredients that actually worked to increase Memory, reaction time, word recall and IQ.

We worked hard searching long for potential ingredients to suit each need in this product. Many nootropics increase acetylcholine which in turn increases memory and cognitive function but this comes at a huge price. Raising acetylcholine alone, generally speaking, will reduce dopamine and serotonin which are also needed for peak brain performance and the drop in these neurotransmitters is responsible for a large portion of the negative side effects reported from nootropic use. We concluded that if we could balance these neurotransmitters we would be able to give users superior brain function without the negatives. Plus dopamine gives you drive and serotonin makes you feel overall better so increasing these gives additional benefits aside from balancing out the acetylcholine levels.

All of the ingredients play their part but there are some really exciting and new additions you might find interesting. BF7 is in my opinion the most promising new nootropic available currently. Not very well known by the public but scientists have been studying this stuff for a while and there is a wealth of human research showing that it:

One other thing that really stuck out to us regarding the formula is how vastly different it is regarding the particular ingredients chosen. Nootrol doesn’t contain the usual frequently chosen nootropics of Alpha-GPC, Noopept, etc, so we inquired about that too:

“You might wonder why we didnt include things like noopept, bacopa, racetams etc. My honest opinion is these often carry side effects that outweigh the potential positives. Lots of these are unapproved, synthetic drugs that are not used as medications for good reasons. For starters….noopept, modanifil and racetams ARE NOT SUPPLEMENTS. They are illegally sold as such but they are in fact 100% synthetic drugs that in some cases failed safety testing for FDA approval. Many of them have harmful side effects and often times do more harm that good. Not at all a good choice in my opinion. We also have many plants and plant extracts that have nootropic effects. Some plants have fantastic potential as cognitive enhancers.

Centella asiatica, Salidroside from rhodiola and Tyrosol (from olives) are all used in Nootrol and they are exceptionally effective but some of the other plant based noots have harmful side effects. Bacopa monnieri for example has a wide range of side effects, can take months to have any positive effect and tends to make many people vomit or have severe gastrointestinal issues. Not exactly ideal. So we worked exceptionally hard during the Nootrol testing process to weed out the negative candidates and bring to you an exceptionally well balanced product that works great and has little or no side effects.”

Black Lion Research is so confident in their new product, that they even sent it out to a number of prominent users on the various forums to see how it performed.[12]

Participants in the public trial took a battery of tests on Memory, IQ, reaction times, etc prior to taking Nootrol and reported their scores. The participants then took the Nootrol for 2 weeks and retested. 100% had increases on all scores. One tester had a 27 point increase in his IQ!

While this isn’t a true clinical trial by any means, it is pretty cool to see a brand actually do some real testing with a product to gauge its actual effectiveness.

Some numbers from the trial:

After two weeks on mystery BLR noot at 1 cap bid: 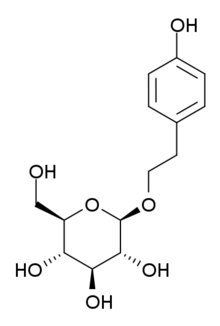 This is the Salidroside molecule. Image courtesy Wikimedia

We’re all for these kinds of tests, even if they’re not placebo-controlled and are done over the internet, because now you can challenge yourself to see if you get any effectiveness as well!

Consume 2 capsules whenever it’s time to get your brain kicked into gear for some heavy duty mental “lifting.”

Earlier we covered Black Lion’s Follidrone 2.0 and its primary ingredient, Ecklonia Cava, and now we have yet another supplement with another unique profile. If you’re looking for something different, you may have just found it.

As the nootropic market gets exceedingly more competitive, the need (and demand) for truly innovative and efficacious products will continue to climb. Black Lion Research has crafted quite the unique and comprehensive nootropic agent in Nootrol.

We might have to test this one out for ourselves to see how much it can boost our brains!