Dan Lourenco: The State of Supplements in Esports | Episode #041 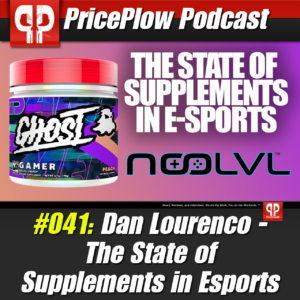 In February of 2021, Dan Lourenco, co-founder and CEO of Ghost Lifestyle, jumped back on the PricePlow Podcast. Hot off the heels of episode #035, where he discussed updates to Ghost Energy, this was a far different episode talking about one thing only: supplements in esports, also known as “gaming supplements”.

Dan gives a world of credit to G-FUEL, the “OG” gaming supplement, but talks about the difference with Ghost Gamer, which uses the clinically-studied nootropic gaming ingredient, NooLVL from Nutrition21. What’s great about NooLVL is that it’s been studied on real gamers playing modern games, unlike other nootropic studies done on the elderly in cognitive decline.

The conversation steers towards how gaming saved the mental sanity for so many in 2020, and in the business world, is becoming the modern and younger version of golfing for meetings.

After a pivotal year for Ghost launching Gamer and partnering with XSET, Dan has a lot of momentum in the e-sports category. Listen to the episode above to get a taste of what’s coming, and how both Ghost and XSET are transcending their own demographics.