Note: Azoth has a new nootropic launched in 2020! See our article on Azoth Total Focus! 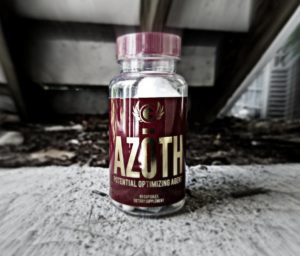 The new formula of the potent nootropic formula Azoth is here, and oh man is it a doozy!

One of the hottest nootropics we covered at the beginning of this year was AZOTH, a fully loaded nootropic supplement that increases motivation, focus, memory recall, and mental like you’ve probably never experienced before.

AZOTH is still relatively young, but has already been revamped to remove some of the more questionable ingredients and add in some other nootropics that make this a must try product if you’re into nootropics. It’s now sold in PricePlow’s retail network, so check the prices and sign up for alerts when we find deals:

You can grab some for yourself by heading to SeekingAZOTH.com.

Note: We’re not receiving commissions for these coupon codes. Maybe we should though, because this one’s gonna sell once you see this label!

Delving Into the Design of AZOTH

We’re always curious about the origins of how a formula comes to life, and sometimes we’re fortunate enough to get an insider’s look into the design process from the gurus themselves. The guys behind AZOTH have developed quite a monster nootropic in their first supplement (as you’ll soon see!). Here’s a bit on the design of the formula from the designers themselves:

“The market is flooded with supplements that make you feel great for a few hours but leave you with a bad crash. That might be just fine for someone who is only looking to kill it in the gym for an hour or two, but for the go-getter who needs to perform at peak levels throughout the day? Forget it. So what we’re seeing now is that instead of relying on caffeinated products and stimulants, many high-performers are abandoning them altogether, afraid that the resulting side-effects will actually hinder their performance when the crash hits later in the day. Instead of solving this problem, most supplement companies are just adding more stimulants, which is only making the problem worse, forgetting that a vast majority of their consumers are everyday people who are using their product for purposes inside but also outside of the gym.

Here’s where AZOTH differs. Instead of just adding a bunch of new exotic nootropics and stimulants, we did something different: we used tried and true energy and focus boosting ingredients like Sulbutiamine and patented TeaCrine, and we infused it with a synergy of cortisol blockers and adaptogens so that any rises in energy would immediately be countered by blocking increases in cortisol and ensuring that the user would not be left with a nasty crash. Furthermore, when the formula wears off, it does so gradually and ensures that the user’s energy levels remained constant throughout the day. The result? Focus, Energy, and no adrenal fatigue, tolerance build-up, or crash. In a nutshell, AZOTH V2 is every high-performer’s best friend and what we’d call a second-generation energy nootropic formula.”

AZOTH is one of the most unique nootropic products we’ve seen as it’s completely caffeine free, but does contain some proven energy and alertness boosters like TeaCrine and Sulbutiamine!

You’ll notice there’s quite a bit of difference between the V1 AZOTH and the new V2 edition described here.

Note: Doses listed below are based on 1 serving (i.e. 3 capsules)

Regarding the updated formula

”One of the drawbacks of the previous formula was that it could not be dosed frequently due to the tolerance build-up and furthermore, the cost was on the higher end. When the news came that Phenylpiracetam and Noopept would undergo regulatory scrutiny, we decided we could do something better. With this formula, there is neither an issue of tolerance build-up and the cost is significantly lower. So while many have asked whether this is a downgrade, we’re actually happier with this newer formula because it’s a win-win.”

For optimal results, use 1-2 capsules of AZÖTH with a light meal containing healthy fats every other day. The ingredients in AZÖTH will pronounce and prolong any stimulants you are consuming, so use other stimulant sources with caution while consuming AZÖTH. Under no circumstances should you exceed 3 capsules in one day.

A Note on Stacking:

Many people (like Robert) love super-strong focus during the workouts, and will often add in some bulk nootropics to energy or pump-based pre workouts. So this got us to wondering how AZOTH would stack with a pre workout and so we reached out to the formulators who responded with the following:

”The great thing about AZÖTH is that you can take it in conjunction with a pre-workout or other sports supplements, as a matter of fact, it will only amplify the effects of any other supplements you are taking.”

How about that for a serious formula upgrade?!

AZOTH packs all you’d need and then adds even more to give you superior focus unlike you’ve probably ever experienced before. You’ll get more work done, in a more efficient manner, and been in one heck of a good mood while you’re doing it.

AZOTH is NOT cheap, but luckily we’ve got a coupon code you can use, should you be looking to step up your nootropics game to the big league:

You can grab some for yourself by heading to SeekingAZOTH.com.