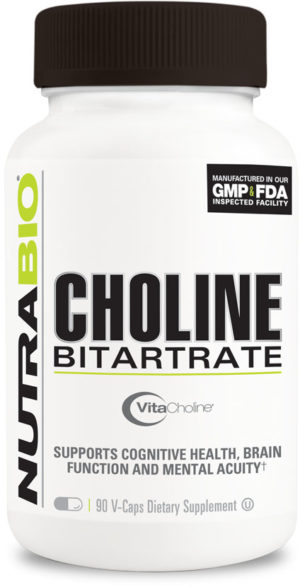 NutraBio Choline Bitartrate is powered by VitaCholine, and you get 550mg actual choline in every two capsules!

Following up on their successful releases of new protein flavors like Bourbon Banana Nut Whey Isolate and their clean-energy pill in CaffPlus, the industry leading brand NutraBio is back with yet another addition to their line. NutraBio’s been expanding its single-ingredient product lineup, focusing on nootropics and brain function, which we have seen with Alpha EAA, as well as the standalone NutraBio Alpha-GPC choline supplement.

Now, for those who want to supplement more of that critical choline but at a lower cost point, NutraBio has released a new Choline Bitartrate supplement based upon the trusted VitaCholine raw ingredient.

Forging a path in the industry with fully focused formulas

With CEO Mark Glazier leading the way for the brand, NutraBio has been a key player in the recent industry changes, where we have seen a trend away from shady proprietary blends and underdosed formulas. The team over at NutraBio has been consistently offering efficacious doses, and have also been the leaders in complete and total transparency, giving us high quality and effective products for over two decades.

Before getting into their newest product and all the benefits that come with it, be sure to sign up for PricePlow deals and coupons to get the best prices on the highest quality supplements out there, and don’t forget to sign up for NutraBio alerts to stay up to date with all their new products. 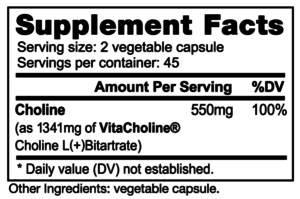 Few choline supplements are as fully disclosed as even this one. And no fillers or excipients inside!

Here in NutraBio’s Choline Bitartrate supplement, we’re getting 1341mg of VitaCholine, the branded and trademarked form of choline bitartrate. This yields 550mg actual choline, exactly 100% of our recommended daily intake.

Choline is an essential molecule in the body, and is required for peak functioning of cells. Unfortunately, many people tend to be deficient in this vital nutrient — especially the growing vegan demographic — since a majority of dietary choline comes from animal sources, such as eggs, seafood, and meat.[1,2]

One of the major functions of choline is its importance in the synthesis of phospholipids, which are critical to the structural integrity of every cell in your body.[1] The body can actually synthesize its own choline as phosphatidylcholine, but the amount our body produces naturally generally cannot keep up with our needs,[3] making supplementation useful if your diet does not give you enough. Genetically speaking, some phenotypes of humans generate more than others, so additional supplementation ranges from “not as important” to “critically important” depending on your status. 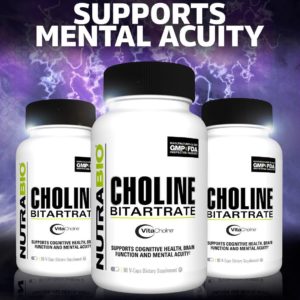 Based upon the trusted VitaCholine brand of Choline Bitartrate, this supplement supports mental acuity – especially if you’re deficient from a lack in your diet!

Even further, choline is the precursor to acetylcholine, which is essentially our body’s “learning neurotransmitter”, which acts as a nootropic, or focus-enhancing compound. Acetylcholine is necessary for mood, memory, and muscle control, or better known as the mind-muscle connection. A lack of choline has been shown to have serious effects on the liver, muscle, and even has an extreme adverse effect on brain development in growing animals.[4] Without a doubt, this is not something you want to risk being deficient in.

Gains in the gym from other choline sources… but does it apply to choline bitartrate?

Usually choline is used as a cognitive enhancer to get seriously focused in the gym, but we have seen studies, albeit with other choline sources, that show genuine strength gains when a choline source is being supplemented. A 2008 study using a different source of choline (Alpha-GPC) showed an increase in peak growth hormone, which allows the body to be in a more anabolic state, ultimately allowing you to pack on more muscle and size.[5] 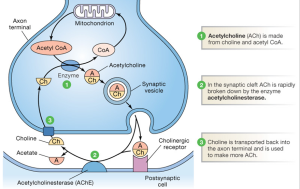 A more recent Alpha GPC study from 2016 also showed an increase in mid-thigh pull, suggesting that choline supplementation can boost force production in the lower body. Upper body measurements were also taken, and while they weren’t statistically significant, they did follow a trend that could possibly suggest similar findings.[6]

We’re not sure if this translates to gains from a choline bitartrate based supplement, but two capsules of NutraBio’s VitaCholine here is possibly a high enough dose to get some of those benefits. Regardless, the above research goes to show that there are several ways to benefit to choline supplementation. 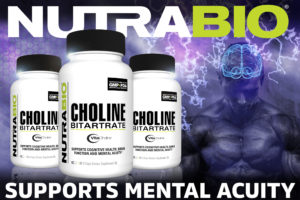 Get your Mind Muscle Connection on!

In addition to the studies done on strength, it anecdotally has the benefit of increasing many users’ focus in the gym, or even just during the day whenever you need a boost. By increasing acetylcholine production, many athletes find themselves much more zoned into whatever task your doing, which is especially useful for lifters seeking to enhance the “mind-muscle connection”, which is essentially the direct focus you give the muscle your training, specifically emphasized feeling the full contraction within the range of motion of the exercise. This can lead to much better gym sessions, translating to even more gains for you.

Why VitaCholine is the Superior Form of Choline Bitartrate

Choline L+ Bitartrate, trademarked as VitaCholine, was developed by a well known ingredient supplier called Balchem. In general, choline bitartrate is a form of choline bound to bitartrate (tartaric acid) to enhance bioavailability and absorption. Within the body, choline will separate from bitartrate and is able to become a direct precursor to acetylcholine. Thus, choline bitartrate will yield greater acetylcholine synthesis because it prevents the choline from getting destroyed by the digestive system.

The Power of L+ Bitartrate!

Although choline bitartrate is a great supplement to increase acetylcholine levels, there are different forms (isomers) that people should be aware of, and this is why VitaCholine is a superior form of choline bitartrate.

Most choline bitartrate supplements on the market are racemic mixtures, which means it includes both dextrorotatory and levorotatory enantiomers, also known as DL-Choline Bitartrate. You can think of these as “right-handed” and “left-handed” molecules that mirror each other. This means that although they’re virtually the same, when flipped, they do not superimpose onto each other, which leads to different biochemical effects.

The levorotatory enantiomer is the only isomer that’s bioactive, which is the one you want to supplement with for maximum benefits. With DL-Choline Bitartrate there is an equal mixture of the two, which would only yield 50% of the active ingredient the body can actually utilize. So you would need a much higher dose to get the same effects as the pure L+Choline version.

VitaCholine is 100% L+Choline so you will receive the best effects, because it only includes the bioactive form!

Balchem uses third party verification testing to ensure VitaCholine is pure, safe, and potent. It is manufactured under strict regulations, and Balchem holds their facilities to high standards. So it’s no surprise that NutraBio trusts them to supply such a high quality ingredient. Therefore, just like with any other NutraBio product, you can be confident in what you’re taking. Because, they never compromise quality to cut costs like many other supplement companies. 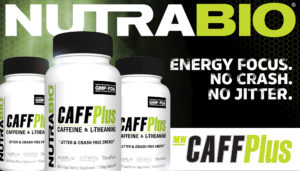 This would pair perfectly with NutraBio CaffPlus — Energy and Focus but no crash and no jitters!

We love NutraBio’s simple single ingredient products that they’ve been releasing lately, and we never complain about more options – especially when they’re cognitive-enhancing choline options! This provides a lower-cost alternative to the recent NutraBio Alpha-GPC capsules. While there may be slightly lower bioavailability, you get more actual choline in the capsule, so for some, it may be a better “bang for the buck”.

Having a trusted, and third-party tested, company producing our single ingredients allows us a peace of mind, knowing that everything we’re taking is guaranteed to be exactly what it is labeled as – with no fillers or excipients added. Regardless of your goals, supplementing with choline is great for nearly everyone — and especially athletes — but even if you’re just looking for a mental boost for your daily tasks, this product may definitely help you out… especially if you’re not eating tons of liver or eggs!