If you’ve been following the site, you’ve surely noticed that Alpha Lion has been on our radar lately. Since bursting onto the scene with the incredible pre-workout SuperHuman, the brand has remained active within the industry. SuperHuman was followed by its high-octane, stim-loaded SuperHuman Supreme, and a phenomenal whey protein isolate in G.O.A.T.EIN, which furthered the notion that Alpha Lion was here to stay. 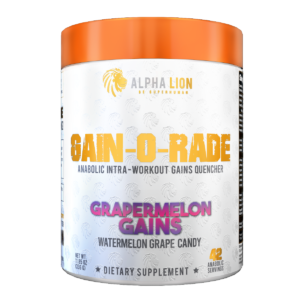 Now it’s time to circle the wagons and revitalize some of the original products!

Alpha Lion has released an updated label of one of their original products. GAIN-O-RADE the “newest” addition to Alpha Lion’s pack – it’s a well-dosed essential amino acid (EAA) plus hydration formula. However, it’s by no means completely brand new, as it’s actually a revamped version of Unicorn Aminos. GAIN-O-RADE maintains what made Unicorn great while bringing more to the table!

In this post, we’ll tell you all about GAIN-O-RADE – what’s new about it, what it can do, and a bit more on the people behind its formula! Before that, however, make sure you’re subscribed to PricePlow – we’ll help you find awesome deals, as well as hit you with all of the supplement news, reviews, and interviews you could want!

GAIN-O-RADE is more than just an EAA Complex

We never had the chance of breaking down Unicorn, but essentially, the product was a BCAA-EAA powder that included one hydration-boosting ingredient and an absorption enhancer. It was a completely adequate formula that would satisfy many individuals searching for an effective aminos powder. Alpha Lion doesn’t just satisfy, though – they give you more than you knew you wanted!

GAIN-O-RADE takes the Unicorn Amino a step further. While Unicorn was mainly a BCAA-focused formula, it included some EAAs, but not enough to consider it a full EAA powder. GAIN-O-RADE maintains the amount of BCAAs used in its predecessor, but packs more EAAs, as well.

In addition, it includes three more hydrating ingredients, which helps make this formula even more distinct. It’s complete with Alpha Lion’s typical fully-disclosed labeling, so we know exactly what we’re getting. Via multiple angles, GAIN-O-RADE delivers on its one true purpose – recovery! 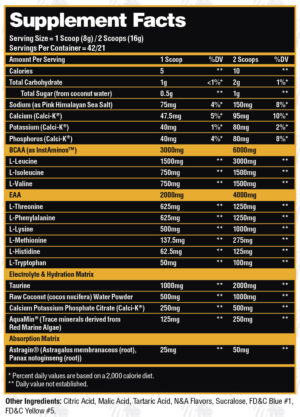 This formula is loaded, with a headlining 10g of EAAs and 6g of BCAAs!

Alpha Lion lists two different serving sizes in their loaded EAA formula, providing doses for either one-scoop of two-scoop servings. While there’s certainly nothing wrong with single-scooping GAIN-O-RADE, the supplement was designed to pack clinical doses within two scoops, so that’s what we’re going to move forward with!

As they’re known to do, Alpha Lion provides 21 full servings. We’ve never asked why, but we’re assuming the answer is somewhere along the lines of “Because it’s better than 21!”

Here’s what each 2-scoop, 16g serving of GAIN-O-RADE delivers: 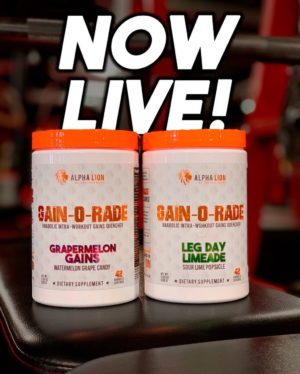 GAIN-O-RADE delivers an effective mix of aminos, hydration, and absorption – a relatively simple label, but nonetheless a powerful one! GAIN-O-RADE does exactly what it promises, and when a product does that, it’s hard to not appreciate it!

GAIN-O-RADE is something you’ll likely want your hands on if you’re searching for an effective EAA formula to supplement your training. Here are all of the great-tasting flavors Alpha Lion is offering!

With a full-fledged EAA matrix, GAIN-O-RADE would’ve been an effective product if Alpha Lion simply stopped there. That’s not their game, however – the brand continues to go beyond what the standard is, taking formulas to another level by making them more versatile. GAIN-O-RADE packs additional hydration-enhancing ingredients, as well, which help take the total formula to another level 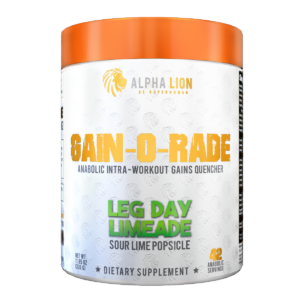 GAIN-O-RADE has what a muscle-building replenishing drink needs, which means that it can seriously help support your training!

GAIN-O-RADE works on two fronts. Most of us train with the intent of building muscle, which requires the presence of amino acids to effectively recover and build. Exercise also induces sweat, which means the loss of water and other key nutrients. Recovering from an intense session takes a concoction of muscle-building aminos and hydration-replenishing compounds, which GAIN-O-RADE delivers. This is a true sports drink for athletes – an all-around recovery supplement that you can take during or after training that will help get you back on your feet sooner!

With GAIN-O-RADE, Alpha Lion shows that they’re not afraid to inject any of their existing supplements with new ingredients. Continuing to innovate, the brand remains ahead of the competition. This isn’t the first time we’ve said this about Alpha Lion, nor will it be the last, but with GAIN-O-RADE, the brand has made yet another statement as to why they should be considered the king of the jungle!