Before training, many of us are religious when it comes to taking pre-workouts. But, how often do we find ourselves drained, halfway through the day’s workout, in need of a little bit of an endurance boost? 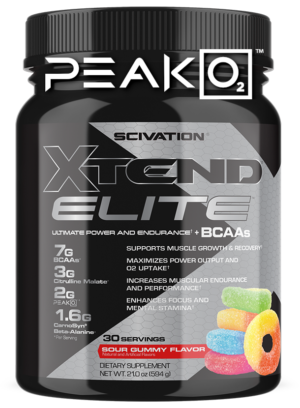 Xtend Elite is the PeakO2-powered version of Xtend for endurance athletes!

That’s exactly why companies sell intra-workout supplements. They’re supposed to help reduce fatigue in the gym, and improve your performance. Intra-workouts give you the stuff you need to maximize each and every rep, whether you’re on the first exercise or last exercise!

Xtend, fresh off a bold rebrand, knows how important intra-workout supplementation is. It’s exactly why they’ve carried over one of their best products, Xtend Elite, which is packed with effective ingredients. From branched-chain amino acids to PeakO2 (a power-maximizing blend with new research recently published), Xtend Elite has got you covered.

Xtend Elite replaces Xtend Perform, which was the first supplement launched with PeakO2. We quickly noticed some very interesting effects – such as lower heart rate, and more information has come out on the cordyceps-powered blend since then. Additionally, many of our readers have latched on, noticing inferior endurance when getting off of the cordyceps-based blend!

Something special is happening here, but now we need to discuss the updated Xtend Elite. Below, we break down the label, elaborate on PeakO2, and tell you just how everything in Xtend Elite will help you get the most out of your training.

Before we get into all of that, be sure to check out prices on PricePlow, and sign up for new deals and price drop alerts:

PeakO2 is a research-backed performance-enhancing extract of several mushroom varieties what will significantly boost endurance.

Let’s start slightly out of order, focusing on the big difference-maker here, PeakO2. The BCAAs are listed below, but many of you know about them. Here’s what’s different:

Xtend Elite – be at the top of your game longer!

At some point, we’ve all found ourselves exhausted long before a workout is over. Rather than make our training more arduous than it already is, why not utilize an intra-workout supplement for some “late-inning” relief? Xtend Elite is like a top-level baseball closer – you call on it to come in late in the game and win the game. 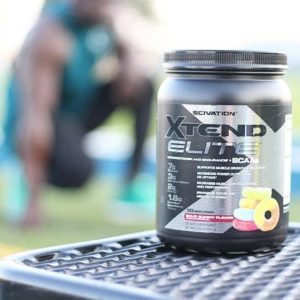 When you consistently find yourself struggling through your training sessions, this is exactly what you want to have in your arsenal. It packs a hefty dose of BCAAs to refuel your muscles, citrulline malate for intra-workout pumps, and CarnoSynⓇ for muscular endurance. But, where Elite really separates itself is its inclusion of PEAKO2. This powerful mushroom blend, led by Cordyceps militaris, has been proven to boost both endurance and VO2 max. If taken long enough, you may even find increased power output. Who doesn’t want any of that?!

With all of that going on, we think Xtend Elite is a great intra-workout supplement. While BCAAs aren’t as effective as full-spectrum EAAs in building muscle, they do have both anti-catabolic and endurance properties. BCAAs are also famously easier to flavor than EAAs, and given Xtend’s track record, we’d bet this stuff tastes great!

Xtend Elite is an exceptionally formulated endurance supplement, as everything on the label works collectively together. You’ll find yourself feeling fresher, later on in your workout. Being able to perform better later into your workout, we have no doubt that this stuff will help you get the most out of your training!