If you’re a proud member of the fitness community, there’s a good chance you’ve heard of apple cider vinegar (ACV). It’s become one of today’s buzzworthy “trendy foods”, as society’s infatuation with ACV is akin to that of avocados, cacao, and even acai of days past. You may have even had someone tell you to start using apple cider vinegar to help with weight management and digestion. 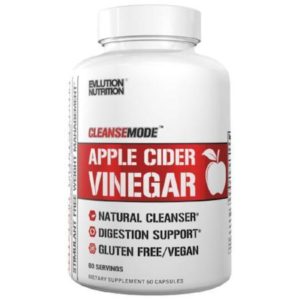 But does that mean you should start throwing back shots of this vinegar? While that’s an option, our friends at EVLution Nutrition have hit us with a more convenient (and safer!) alternative!

With the new EVLSports CleanseMode Apple Cider Vinegar, you can get all of the benefits of ACV without drinking it in its liquid form! This is important because straight apple cider vinegar is pretty bad for tooth enamel, and you can really damage your teeth by repeatedly exposing them to ACV. Luckily, EVL offers a capsule version, allowing for easy and safe consumption!

We’ll get into why you may want to consider using this product, what apple cider vinegar has to offer, and much more! But first, be sure to check out PricePlow for great deals on this stuff, and sign up for price alerts!

“Consume 1 capsule with morning, noon, and evening meals or use as directed by a physician or licensed nutritionist.”

We’re always high on EVL’s flavor systems… but sometimes we don’t want to taste something!

Apple cider vinegar has long been touted for what it can do for the human body, and research has shown that it should be part of your daily arsenal. However, some people may be put off by the acidic taste or the potential damage it can do to your teeth. Luckily, this capsulated version comes with all the benefits and none of the shortcomings of ACV!

This product’s mainly focused in flushing out your system, and making sure you’re running smoothly. ACV has tons of antioxidants, heart health benefits, and some weight management potential. Toss in a little bit of capsaicin to spice things up, and you’re looking at an effective, all-natural, body-regulating supplement!