2014’s top brand… and they’re clearly not done yet

Myokem seemingly came out of nowhere in 2014, turning the industry on its head with science-based formulas and giving customers exactly what they wanted.

It looks like 2015’s going to be no different: Myokem mTOR Pro has been announced.

This is an amino acid supplement with an industry-first (and exclusive) time-released leucine named ActiveTR.

News is slowly coming out, so you can sign up for updates below or head over to our Myokem page and click monitor this brand.

The basics behind mTOR Pro 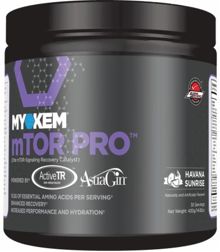 Click the image to go to the best deal on mTOR Pro!

The mTOR Pro label is available below and we’ve also got more information on the ActiveTR time-released leucine complex!

What’s even better is that Myokem has made mTOR an open-label product, so we can see the exact amount of each amino acid that we can expect in each of its 30 servings.

Here’s the intro information on the ingredients and dosing:

Havana Sunrise is a new flavor – it’s typically a cocktail mix of grenadine, orange and/or strawberry, all mixed in with coconut-flavored rum. That could give you some guesses. 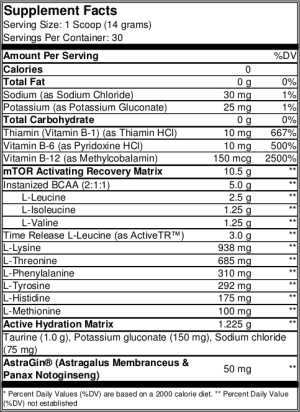 The ingredient label is available to the right, and our full analysis is below.

The one remaining point of mystery is the new “Havana Sunrise” flavor, which Myokem hasn’t expanded on in any of their pre-release materials as of yet. We’re still expecting it to be based on the cocktail of the same name, which is a mix of grenadine and orange or strawberry with coconut rum. We may have to wait until the actual product launch to learn anything new about it, however.

In the meantime, be sure to sign up for updates on Myokem products and we’ll update this page as hear more.