ProSupps HydroBCAA: A BCAA with All the Essentials! 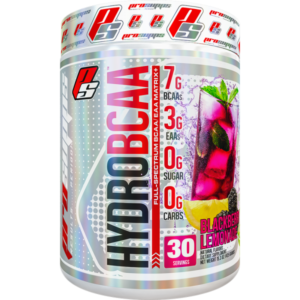 ProSupps has reformulated their amino acid / hydration formulation HydroBCAA to now include all of the essential amino acids (EAAs).

We’ve been touting the superiority of EAAs over BCAAs heavily lately as most of the recent research indicates that BCAAs are altogether inferior for stimulating muscle protein synthesis and preventing muscle protein breakdown.[1]

That being said, the vast majority of companies out there are still only making BCAA-only amino acid supplements due to the cheaper manufacturing cost, ease of flavoring, and hype that BCAAs have received over the years.

More info is just ahead, but first, take a moment to check the best deal and sign up for alerts on PricePlow:

HydroBCAA has retained its rather stout 7g dose of 2:1:1 BCAAs in the new version, but now it includes ALL of the other EAAs too! 3g worth to be exact, bringing the total amino acid yield to an impressive 10g essential amino acids.

As for what’s been removed, ProSupps has removed 2.5g of glutamine and 1g of citrulline. For a comparison, we’ve listed both of the ingredients panels below so you can see the changes between the old version (left) and new, EAA-enhanced version (right).

The one minor issue is that we don’t know how much of each EAA we’re getting. While this isn’t a huge deal, it would be nice to have some disclosure on the amounts, as that’s been the trend of most of the newer EAA formulas hitting the market, as seen in EAA Max by Primeval Labs — but note that HydroBCAA has 4x the EAAs than some other “EAA” supplements!

We know that EAA formulas are notoriously difficult to flavor, so perhaps it could be that ProSupps chose to keep the ratio hidden so as to protect their “secret sauce” on how they worked the EAA amounts to get the flavoring spot on.

Given the flavors listed next, it’s clear ProSupps wants to hit the ground running here:

ProSupps has launched EIGHT (yes 8!) flavors of HydroBCAA, and some of them sound pretty wild. The full initial release list of flavors is: 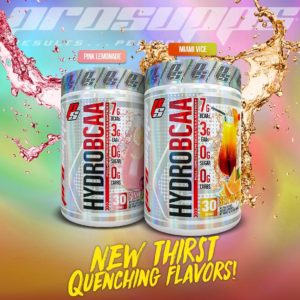 We’ve tried several of the new flavors of HydroBCAA, and they’re ALL delicious.

Tea is definitely the “it” flavor in the industry right now, with everyone trying to nail the perfect ratio of sweetness, refreshingness, and “lemoniness” that are the trademarks signs of proper southern sweet tea. NutraBio’s Intra Blast is Mike’s favorite in that regard. It’ll be interesting to see if ProSupps delivers on their Texas Tea and how it stacks up to some of our other favorite sweet tea flavors.

Meanwhile, Miami Vice was originally perfected by VMI Sports in their K-XR pre workout, and for VMI, that’s a blend of Strawberry, Pineapple, and Coconut. Great stuff to drink while training in the heat!

ProSupps brings EAA to your BCAA

While it might be a slow transition away from BCAAs to EAA amino acid supplements, the tide is definitely shifting. It’s refreshing to see companies big and small embracing the latest research and opting to use EAA based formulas which continue to be shown to be superior to BCAA only products.

HydroBCAA is the latest EAA rich formula to hit the market….who’ll be next?!