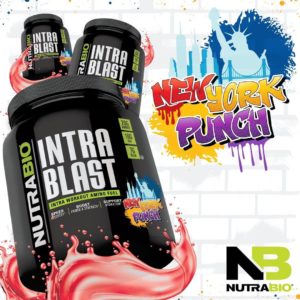 It’s back and now available for everyone to enjoy! This flavor is truly one of a kind.

If you follow the sports supplement industry, you no doubt heard about all of the phenomenal flavor and product launches NutraBio did in 2019. But one of the most notable releases flew a bit under the radar — at least outside of the Northeast.

We’re talking about none other than New York Punch Intra Blast! Reason being, the initial release was a Natural Body Inc exclusive flavor launched at their “2019 Epic Block Party” in the fall, and was not distributed worldwide.Es

New York Punch is unique, refreshing, and downright delicious — there’s a reason why we named it PricePlow’s 2019 top flavor system. It has the perfect blend of coconut, mango, orange, and some other fruits that we can’t completely nail down!

After the rave reviews on this flavor system, NutraBio realized it was too good to keep from the rest of the world.

“There’s a reason why this won my pick for “Flavor System of the Year” in 2019. It hits all the right notes and has literally no downside… except you’ll run through the tub quicker! There’s a perfect amount of coconut, mango, and some other fruit (maybe kiwi?!) inside — it’s an incredible tropical-flavored drink. 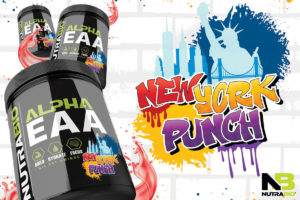 At the tail end of 2019, Nutrabio released Alpha EAA in New York Punch. While Alpha EAA is great (it’s PricePlow’s 2019 supplement of the year!), there’s something about Intra Blast that takes this flavor to another level – and Intra Blast has a larger base of ingredients and bigger legacy than Alpha EAA. So after much consideration, NutraBio decided it was time to let everyone enjoy Intra Blast in the incredible New York Punch Flavor! PricePlow is excited to announce it’s now available online and at your favorite retailer!

“We launched NY Punch in Intra Blast as an exclusive flavor for New York retailer Natural Body. Although everyone liked it, we didn’t know how popular the flavor would be. Well, it went gangbusters at Natural Body, so we added that flavor to our Alpha EAA and it really took off! The feedback was off the charts. We’re now making the Intra Blast version available everywhere. We may even add this flavor to other products in our line.”

In this post, we’re going to explain how New York Punch came to be and highlight the key benefits of Intra Blast! You know NutraBio is not slowing down anytime soon, so make sure to sign up for their news and deal alerts down below!

The Backstory of New York Punch

Natural Body Inc is a well known supplement store and online retailer based out of New York. The owner, Steve Calabrese, has paved the way for supplement retailers, and the knowledge he shares to help everyone around him improve is priceless. It is a great honor for a prestigious company like NutraBio to partner with the store on an exclusive flavor, especially one this good.

An epic flavor for an Epic Block Party 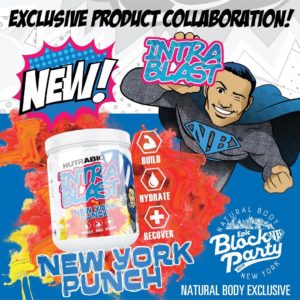 It’s official! NutraBio’s exclusive flavor for Natural Body Inc is now available for everyone to enjoy!

Every year, Natural Body puts on their Epic Block Party in New York City as a customer appreciation event. They bring in some of the biggest names and companies in the industry to come together, pass out samples, and educate their loyal customers. It’s always been a massive success, and each year just keeps surpassing the last. So what better way to celebrate another gathering than with an exclusive flavor release of Intra Blast from NutraBio!

In honor of Natural Body Inc’s locations “on the island”, they named it New York Punch, and it’s truly a one-of-a-kind flavor. It even featured a custom tub with Steve right on the front! This exclusive product launch was a great way to honor what he does for the industry, and as huge fans of Steve (and his business partner Tim Gritzman), we want to thank him as well!

Now that you know how New York Punch got its start, let’s quickly highlight what makes Intra Blast such an epic product on its own.

“We’re huge fans of Natural Body Inc (who originally had the exclusivity launch on it for their 2019 Epic Block Party), but this flavor was just too good to keep from the rest of the world. Glad they kept the name though!

This flavor is basically unbeatable for me, especially when I’m rocking a sweet tooth. Good luck to Mike if he ever expects to beat this one!!” 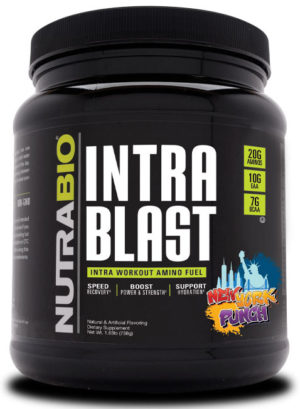 One of PricePlow’s favorite flavors of 2019, is back and here to stay!

Remember when branched chain amino acids (BCAAs) were all the rage, and nobody was even talking about essential amino acids (EAAs)? Nowadays, EAAs have taken over the amino acid space, as more research has concluded they’re likely to be superior.[1]

It’s great to see the industry evolve with the new literature, but let’s not forget who was one of the first companies to bring EAAs to the market.

Always ahead of the curve: Selling EAAs in an era flooded with BCAAs

NutraBio has been around since 1996, and they’ve always been ahead of the curve when it comes to industry trends. As told in our article titled The NutraBio Story, when everyone was shilling proprietary blends, they went full disclosure. When there were industry-wide questions over product compliance, NutraBio began publishing 3rd Party Lab Tests on all products.

And when everyone else was selling BCAAs like they were the best thing since sliced bread, NutraBio was full on board with EAAs in Intra Blast. They weren’t the first to do this, and they still sell some delicious BCAA powders, but they were definitely earlier than most brands to the EAA market.

Intra Blast has been a staple product for many NutraBio customers because it’s one of the most comprehensive intra workout formulas out there. We already did a full write up on Intra Blast, so if you want more of the nitty gritty details on the formula, it’s a great source to check out! So below, we just take a brief look at the ingredients to give you an idea of what makes Intra Blast outshine its competitors.

One serving of Intra Blast will deliver:

From just a brief look at the formula, it’s fairly obvious to see what makes Intra Blast so effective. It has the tried and true blend of all nine essential amino acids, some extra ingredients to boost strength and performance, and lastly, they top it all off with electrolytes to keep you hydrated. There’s not a ton more you can add (outside of perhaps a carb source if that suits your diet), and that’s why Intra Blast is a staple product for many. 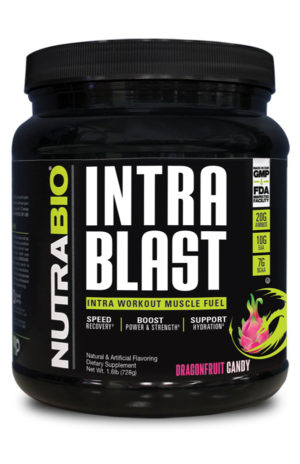 Another “crazy” flavor system from NutraBio is Dragon Fruit Candy, and Intra Blast was the first supplement to get the Dragon Fruit treatment too!

This post was really only meant to highlight the release of New York Punch, but there are way too many other delicious flavor options available. Therefore, PricePlow has you covered with a complete list of all Intra Blast flavors listed below: 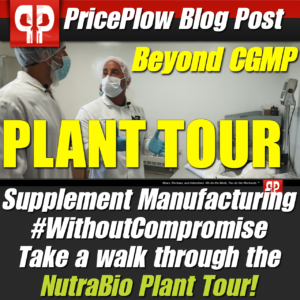 As you can see, NutraBio has been a leader in the industry from the very start. They have grown to be one of the most well respected companies, but how did they achieve such great success?

They reached the top by: not sacrificing quality for cost, controlling the whole process (from sourcing raw materials to creating the end product), being as transparent as possible, and putting the customer first every time. Every single one of NutraBio’s products reflects a team of people that live their life without compromise. It’s been that way since 1996, and although NutraBio continues to evolve and grow, they will never let that go.

Get Ready To Rock Your Taste Buds!

NutraBio has put out high quality products for years, but their flavors never really wowed anyone – until 2019. They were good, but not insane. Mark Glazier wanted insane. And ever since Mike Perez became the flavorist, NutraBio has made that happen and has been on a killer winning streak. If you try any flavor of Intra Blast, we highly recommend New York Punch!

Every flavor seems to be better than the last and most of the time, we question how Mike’s able to make a product with so many amino acids taste so good. Now, NutraBio is nailing the quality, testing, safety, and the taste of each product. It all started in 2019, and NutraBio has been on a roll ever since, it’s hard to keep up!

If you have a sweet tooth and like tropical flavors, you’ll be hard-pressed to find a better tasting supplement than New York Punch Intra Blast! It’s now available in Alpha EAA as well, which is one of their best-selling products. We hope to see this flavor system continue to show up in other products such as, NutraBio Pre Workout and Pre Extreme. New York Punch is such a unique flavor, you really just have to try it for yourself.

If you’re reading from abroad or you’re a retailer, you can finally get your hands on this epic flavor and see for yourself what makes Intra Blast New York Punch one of the best intra workout products we’ve seen hit the shelves. Stay tuned for more reviews, deals, and news, because things are just getting heated up for NutraBio, just wait to see what they drop next!