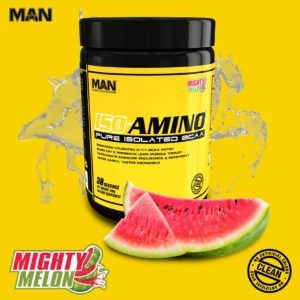 Mighty Melon was announced as the first flavor, but so far we’ve only had Fruittles and Sour Batch Kids and love them both!

Name one flavored BCAA supplement that comes in a powder, has only the BCAAs, and isn’t from a “bulk supplier” website.

Chances are, you have very little in mind. When we spoke to MAN Sports about it, we could hardly think of a few, and they’re rarely in stock!

So they decided to do something about that.

But when MAN designed their new “simple” BCAA supplement that was extremely cost-effective, they amplified it in another way – with candy flavors that taste like real candy!

A “simple” BCAA with INSANE flavors!

We’ve now had the Fruittles (Skittles flavor) and Sour Batch Kids (Sour Patch Kids), and let us tell you – they are dead on. This is a must-try supplement – and the price makes it well worthwhile too.

We’ll get into the backstory below, but first, you can compare prices and sign up for price drop updates to see just how great of a deal they really are:

What happened to my BCAAs? 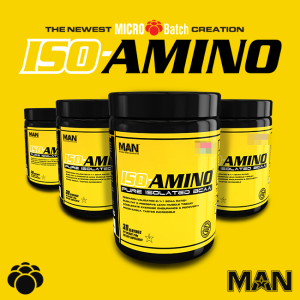 MAN ISO-Amino is coming – kind of funny that a product that contains only what it says it will contain has become a big deal.

And while most of those ingredients do have benefits, sometimes the only benefit we want is from the actual branched chain amino acids themselves!

So why are we paying for all this extra crap?

MAN Sports ISO-Amino to the Rescue

Just like MAN found themselves a nice market gap with their stimulant-free, focus-based pre workout supplement, NOOPUMP, they’ve found another one that the industry “accidentally” created for them here.

No other ingredients. No other nonsense.

The flavors – What makes this product a must-try.

Over time, things got crazy with all of these flavors!

It only takes three words to cover our ISO-Amino Review. Man NAILED it with this stuff.

If you’re unfamiliar with Tiger’s Blood, it’s a top-selling flavor. It’s a “sno-cone” flavor that’s a mix of watermelon, strawberry, and coconut!

Blue Bombsicle is the flavor of those awesome red, white, and blue popsicles we had growing up.

But it’s “Sour Batch Kids” that we’re most excited for!

They even came out with ISO-Amino Coffee Creamer!

So earlier, here’s what MAN’s COO told us:

This will be HANDS DOWN the best tasting amino available.

I don’t think I’ve told you all the flavors yet, your head is going to explode when we tell you!!

He couldn’t have been be any more right. After hearing about the Sour Batch kids, we must get this stuff!

Add some of that crazy awesome flavoring and ingredients to help with sweetening and mixability, and you’re done.

Leucine, Valine, and Isoleucine are the three BCAAs, and they’re an extremely important part of your diet

Anyway, our main hope was that this would have a price tag to match, and MAN came through with flying colors. Just take a look at the deals below.

The biggest question is — what flavors do you try first?