Performax Labs has unveiled their latest edition of their insanely popular fat-burner, OxyMax, with an upgraded ingredient panel featuring a powerfully-dosed list of fantastic ingredients to help you get the most out of your diet. Throughout the 2021 Performax Labs branding updates, they’re staying true to their name with maximum strength supplements, exemplified by the new HyperMax 3D Extreme pre workout. 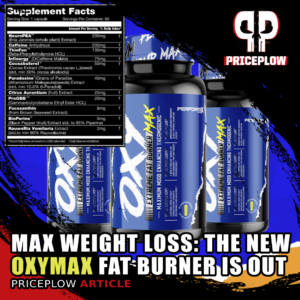 The new Performax Labs OxyMax fat burner is out, and it packs a massive punch in just one capsule!

The same goes for OxyMax, which is as strong as ever in just one capsule:

OxyMax: Burn fat and feel good while doing it

Much like the previous version of OxyMax, this latest version of the top-selling fat burner is packing a lot of high-energy, feel good ingredients led by N-Phenethyl Dimethylamine and Beta-PEA. We’ve seen this duo before from the brand, and thoroughly enjoy its euphoric and motivating energy rush.

What else does it have to offer and will this be the next great fat burner? We break it all down below, but before we get to the details, take a second to sign up for PricePlow alerts and to check our coupon-based deals:

In ONE capsule of OxyMax Max Strength Fat Burner you get the following — and it includes a total of 255 milligrams of caffeine and plenty more stimulants (wow!):

As mentioned throughout the article, this is a high-stim product with 255 milligrams of caffeine per capsule, and basically a half-dozen other stimulating ingredients inside. 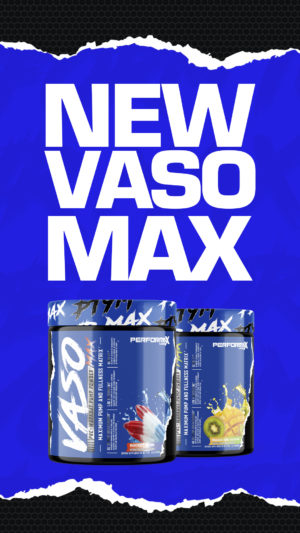 The OxyMax VasoMax stack is where it’s at for fat destroying workouts!

This means you are to only take one capsule at a time. We suggest first thing in the morning before eating, and you can optionally take a second capsule early in the afternoon before the “afternoon slump”.

Do not combine a capsule with any stimulant-based pre workout supplement. If you’re going to train with it, stack it with Performax Labs VasoMax.

OxyMax Takes a Weight Loss Capsule to the Max

As you can see, OxyMax uses a lot of ingredients, all disclosed incredibly well, which should make for an extremely effective fat burner that also makes you feel like a million bucks, even in the midst of “poverty macros”. We’ve seen some powerful fat burners, but we’re not sure we’ve seen this much power in just a single cap for a very long time.

Performax Labs is 3 for 3 on the revamped formulas during their 2021-stravaganza rebranding effort. What’s the next product to be updated, and will Performax continue their winning streak?

Only time will tell… but these ingredients are a knockout! Stay tuned to our Performax Labs news page to keep learning.

Note: This article was originally published on October 18, 2017 and updated on October 29, 2021. Earlier articles had also been written on OxyMax XT, which was discontinued and rolled into OxyMax listed here.