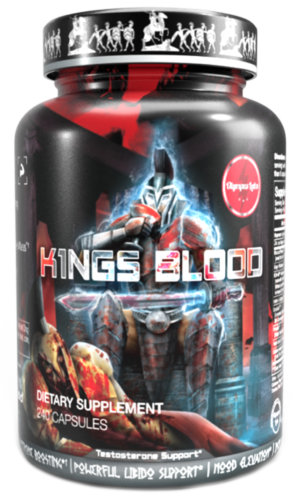 The Olympus Labs K1ngs Blood test booster does it in true OL Hero Fashion: Trusted Ingredients we love plus some new stuff!

Following a comprehensive, millennial-focused rebrand, Olympus Labs has reformulated some of their most effective products. One of the brand’s most popular supplements, K1ngs Blood, which was already one of our favorite testosterone boosters, has now gotten even better! In fact, it acts more like a hormone optimizer – it regulates healthy testosterone levels in men, as well as balances estrogen levels in women.

Hormonal Help for Everyone

This supplement has some incredible stuff to offer, and it’s ridiculously versatile, so there are a number of reasons to use it. After our analysis below, we realize that unlike other “testosterone boosters”, this one likely has enough clinically-backed ingredients to provide benefits even to healthy young males!

Read on for our in-depth breakdown of K1ngs Blood, where we’ll give you an ingredient-by-ingredient analysis, as well as potential uses and benefits! But first, make sure you check out PricePlow for price comparisons and sign up for Olympus Labs news and price alerts!

Note: This blog post is about the new 240 Capsule formula released in 2018.

The following comes in a full day’s supply of eight capsules. We cover dosing below.

The dosages above are for eight capsules — the daily dose. We suggest breaking this into two different 4-capsule doses, both taken at meals (roughly 12 hours apart if possible).

8am / 8pm is usually a good strategy.

In true Olympus Labs style, we have a monstrously-loaded, clinically-dosed supplement that does not shy away from Chinese medicine. They take things we already like, and add even more, teaching us a few things along the way. 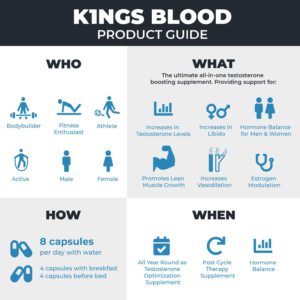 Truth be told, natural testosterone boosters are typically for guys over the age of 35, but this one’s to the point where we’re confident even young healthy guys are going to get at least a small bit of benefit too.

In K1ngs Blood, Olympus Labs is unleashing a versatile hormone optimizer. While most hormone-related supplements focus on either men or women, exclusively, K1ngs Blood doesn’t need to. Each ingredient has potential benefit to either sex, without inducing any peripheral drawbacks. That makes it safe to use if you want to revise your hormone levels, whether you’re male or female.

It also makes it extremely stackable! If you’re a man trying to “more aggressively” raise testosterone levels, this can be paired with something like Olympus Labs Ar1macare Pro. On the natural side, a stack with Olympus Labs Test1fy could be good, and to further protect on the estrogen end, Olympus Labs Elim1nate also supports hormonal balance.

If you want some help in keeping your hormones in check, and your body running as it should, make sure you have something like K1ngs Blood in your arsenal! Prices and Olympus Labs News Alerts are available below, courtesy PricePlow: