There’s a trend going around the sports nutrition segment of the supplement industry lately: fully-dosed RTD pre-workout drinks! Shortened from “Ready to Drink”, RTDs are useful for their convenience, and can be sold and consumed on-site at a gym or store without needing water and a shaker cup. 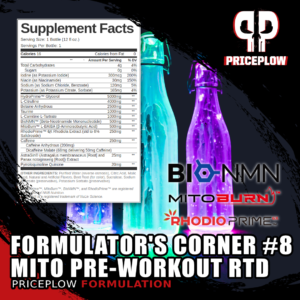 RTDs have been around for decades, but over the past year, brands are dosing them far better, thanks to improvements in bottling technology and ingredient solubility. This gives us an opportunity to give our two cents and showcase something a bit different for today’s Formulator’s Corner profile.

In this article, we create a theoretical RTD pre-workout supplement that focuses on feel-good, clean energy with mitochondrial support ingredients. It’s an RTD-friendly twist on our previous Mitochondria-Enhancing Formulator’s Corner Pre-Workout, with non-soluble ingredients removed and replaced with ingredients that will stay blended and stable in water.

Re-igniting The Power of Mito…

While many RTD pre-workouts are roughly the same, we’re leaning on novel ingredient developer NNB Nutrition(news), a company that focuses on metabolic health and “clean energy”, to provide us with a powerful formula that doesn’t need too much caffeine.

You can read our article titled The Power of Mito to understand the importance of mitochondrial health, which is the driving force behind this ideation. The mitochondria are our cell powerhouses, and are pivotal to healthy energy. This formula includes added ingredients to support the mitochondria, letting us keep the caffeine at a reasonable 250 milligrams per bottle.

Below is how we’d make an RTD pre-workout without tons of stimulants that leaves the customer feeling better than they started – and it’s one that will differentiate well from the competition. First, check out our NNB Nutrition news alerts, as we have more news on these ingredients coming soon:

Our goal here is to provide a feel-good pre-workout that’s strong, effective, and supportive of the mitochondria – but with a reasonable 250 milligrams of caffeine that will work better than energy drinks that use even more. The following would come in a 12oz bottle:

When looking at pre-workout supplements on the market, many of them are insanely high-energy, or have epic pumps, but not all of them provide the type of clean energy we’d often like to feel. 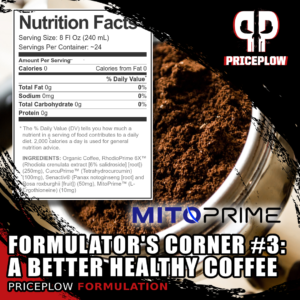 Alternative to pre-workout is coffee! We made a unique coffee blend in Formulator’s Corner #03.

Although we had to ditch a few ingredients that wouldn’t be stable in RTD form from our mito-boosting powder (like creatine pyruvate, apigenin, and the acetyl version of carnitine), this still has the cornerstone mito-boosters like BioNMN, RhodioPrime 6X, MitoPrime, and PQQ to get the job done. The question is how much glycerol we can pack in here alongside betaine and taurine, and what flavor system we’d use to make it work.

Finally, one may wish to formulate a fat burning “Burn” pre-workout supplement with a base formula like this. If that’s the case, consider adding CaloriBurn GP grains of paradise extract to the mix. That will add some spice, but also provide additional thermogenic support. In that case, we’d likely reduce HydroPrime glycerol (to reduce just a few calories) and consider adding extra fat burning ingredients like a low dose of synephrine.

Back to our formula, we truly believe more pre-workout supplements need mitochondria-boosting support – users are far too often using caffeine when it’s not exactly what’s always needed. The energy issue could be as simple as low iodine levels, or as complex as low NAD+ levels. Either way, we tried to support numerous types of athletes with a powerful yet reasonable mito-friendly formula that works in liquid.