At this point, we’ve covered a few of the different ephedra-based fat burners from Hi-Tech Pharmaceuticals. Each member of this product line goes after a different target market. 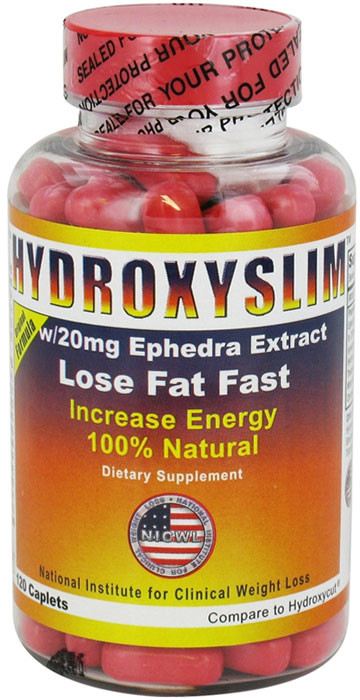 Hi-Tech’s HydroxySlim is basically a “standard” at burner but with 20mg ephedra to test the new ephedrine-free ephedra waters!

For example, if you want the “standard” ephedra fat burner, you go with Lipodrene. If you want maximum stimulants, you can check out Lipodrene Hardcore or Stimerex Hardcore.

And if you want a maximum dose of Thermo-Z ephedra (which is now ephedrine-free), there’s HellFire EPH 150.

However, all of the above products contain more aggressive stimulants.

So at the other end, if you don’t want aggressive stims, but want to test out Hi-Tech’s Thermo-Z ephedra, you have two main options: Ripped Up (the lower-stimulant option), and HydroxySlim, which we discuss here today.

HydroxySlim is one of the in-between products, but it’s much closer to Ripped Up in terms of stim content than the products at the deep end of the pool mentioned above. Like Ripped Up, it has a bit heavier dosing of caffeine and mood-boosting PEA compounds, as well as the fat-burning bitter orange extract (synephrine).

As with Ripped Up, it’s also with a lower amount of ephedra in the Hi-Tech product line, at 20mg per dose. So this is a good place to “test the waters” for those who have moderate stimulant tolerances.

Let’s keep the excessive verbiage slim and get straight to the ingredient breakdown – but first, compare prices using PricePlow to find the best deal. If you need a better price, sign up for price alerts:

The entire formula is a 1600mg prop blend for this one, so we only know the specific dosages of a few of the disclosed ingredients.

So basically, HydroxySlim is the product for you if you want to experiment with the lower doses of ephedra, and don’t want more aggressive stims, but do want a fairly high dose of caffeine along with some synephrine. It’s kind of like a “regular fat burner” but with ephedra, which is exactly what many users want to try.

The down-label stuff like salicin and chromium could potentially be a dusting, but we know enough about the “main event” ingredients to know that this is a viable ephedra-based fat burner if it fits your personal stim profile.

It’s worth a shot for those of you who are extra conservative but know you like caffeine.