The past decade has seen an intersection of two major areas of growth:

The cross-section of these two has created an incredible field of gaming supplements, which often go beyond caffeine by adding in focus and eye health ingredients, but usually keep the caffeine less than energy drink or pre workout. 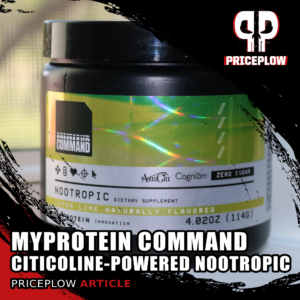 It was only a matter of time for these forces to combine with the monstrous rise of Myprotein supplements in the United States (@MyProteinUS), yielding a new kind of gaming supplement.

This article details the ingredients in Command, but the quick story is in the headline above – 150mg caffeine combined with a solid 500mg citicoline, a potent choline source. It’s synergized with L-theanine and L-tyrosine, and brings some extra blood flow and eye health ingredients.

Before heading in, sign up for PricePlow’s Myprotein news alerts so that you don’t miss any new flavors, giveaways, and other launches:

The following ingredients are in two scoops of Command, which will leave you with 20 servings per container. For late-night gaming or even lower caffeine intake, you can use one scoop, making the tub last longer:

See below for an up-to-date listing of Command nootropic flavors:

We’re not 100% certain if Myprotein is going all-in on the gaming niche with Command, but it’s not a bad idea given the formula’s eye support and dopaminergic ingredients.

Myprotein has a ton of supplements in Europe, and has brought many of them to the America shores at incredible deals!

However, if you’re not a gamer, don’t let any gaming-based marketing push you away – this is a feel good nootropic formula regardless of what you do with it! We’re often on the hunt for interesting low-caffeine blends, and if you’re a fan of citicoline like we are, you know that it’s going to hit pretty well. We do wish there was more Rhodiola inside, but understand the dosing given the incredible coupon-based pricing the product launched at.

No matter what your game is, or if your “game” is even a game at all, we’re confident you’re going to get a nice slice of euphoria and energy without the jitters using Myprotein’s Command.