The last time Glaxon was featured on the PricePlow Blog, we covered Plasm Surge V2, its revamped, stimulant-free pump product that had all of the “Goons” talking! Shortly after, the company dropped another innovative product called Astrolyte, a jam-packed electrolyte formula with added gut-health promoting prebiotics.

Glaxon launched at the end of 2019 and so far, the company has been extremely successful. After just 10 months, Glaxon announced a massive rebranding of its entire product line.

Rebrands in the sports nutrition industry are common, but we’ve never seen a company actually do it before its one-year anniversary. But instead of calling the undertaking a rebrand, Glaxon refers to it as “season two.” Not only will every one of Glaxon’s existing supplements get an updated formula, plus new look and flavors, some will also have a different name. And that brings us to Tranquility — formerly known as Sedative.

One of Glaxon’s most popular supplements from “season one” is Sedative, a supercharged sleep aid that could knock anyone out cold. Hence, the name was fitting. 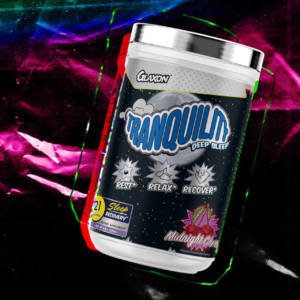 The new and improved sleep aid from Glaxon has arrived!

Some retailers and customers, though, weren’t big fans of the name. Glaxon listened to the feedback and renamed the product. Considering how many active ingredients are in Tranquility, it might sound like it was a challenge to make it palatable, but Glaxon pulled it off!

Sleep aids are underrated supplements in the sports nutrition industry. Most consumers are more concerned about the next best stimulant-packed pre-workout. However, for some people, sleep deprivation negatively affects performance more than a pre-workout could boost it.

If you’re constantly tired throughout the day and your performance is suffering, then maybe it’s time to reach for a sleep aid rather than another energy drink. Glaxon formulated Tranquility to help you unwind, unplug, and de-stress after a long day. Not only will it help you get a restful night’s sleep, but you’ll also wake up refreshed and ready to conquer whatever life throws at you.

Keep reading to see what Tranquility has in store for you and sign up for Glaxon news and deal alerts so you stay updated on plans for “season two.”

It’s important to note that Tranquility is one of the most powerful sleep aids on the market, which is why Glaxon lists the dosages for both a one- and two-scoop serving size. If you’re new to or sensitive to sleep aids, Glaxon highly recommends starting with one scoop so you can assess your tolerance.

For one scoop, it’s suggested that you mix it with approximately 8 ounces of water, and for two scoops, about 16 ounces of water. Consume it anywhere from 30 to 60 minutes prior to your desired sleep time. If you do well with one scoop, then the more you’ll get because every tub of Tranquility comes with 21 servings (based on two-scoop serving size).

After trying both Sedative and Tranquility, we can honestly say that Glaxon significantly improved the flavor, mixability, and texture this time around. One of the first flavors in Tranquility’s lineup is Midnight Cherry, which even Ben likes and, as many of you know, he’s not a big fan of anything cherry flavored.

Here’s an updated list of all the available flavors of Tranquility:

It seems that everyone knows how important it is to get six to eight hours of sleep per night, and yet, it’s the first thing we tend to neglect when life gets busy. Soon enough, you’re going to sleep later and waking up earlier in order to keep up with work, school, family, and your social life.

Glaxon continues to gain traction in the supplement industry with innovative products.

However, if you’re serious about your health and performance, then getting a restful night’s sleep is essential. Skipping out on sleep negatively affects you more than you think. But what happens when you try to go to bed earlier and have trouble falling asleep and/or staying asleep? Well, that’s where a high-quality sleep aid may come in handy.

Not only can Tranquility help you sleep, but it also promotes relaxation, helps lower stress levels, and helps you recover both physically and mentally. If you’re experiencing chronic fatigue, sluggishness, lack of motivation, and have trouble sleeping, instead of using a high-stimulant pre-workout, we recommend trying Tranquility. It might just be a game-changer!

Glaxon has a lot more on the way in the next few months, so be sure to subscribe below so you don’t miss out on what the Goons are up to!