Posted on June 3, 2022 by Mike Roberto and Nick Andrews | No Comments

The Animal Team at Universal Nutrition has been so busy it’s been tough to keep up with the brand’s numerous launches. Most recently, we were blown away by the Animal Primal pre-workout, which is easily on this year’s must-try list.

But after the recent female-focused Animal Alpha F, it was time the men got some extra attention – something we don’t generally have to say about Animal products! In late spring of 2022, we finally got it, especially for men aged 35 and up: 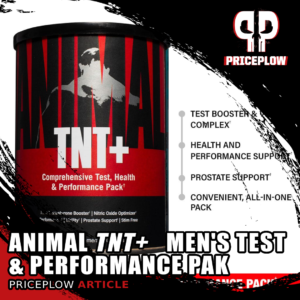 Animal TNT+ is a testosterone, vitality, and performance support pack made for men ages 35 and up!

Animal’s TNT+ is a comprehensive testosterone-supporting performance and health pak from the crew that brought you the legendary Animal Pak – and it provides an incredibly well-rounded set of benefits for men entering middle-age and beyond:

Taking advantage of the pak mentality, this isn’t just a supplement with one physiological goal – it has many of them – but they all come together to help men stay long and strong.

We explain the TNT+ ingredients below, but check PricePlow’s prices and sign up for our Universal Nutrition news, this team has been keeping everyone busy:

In a single 1-pack serving of TNT+ from Animal, you get the following:

Like most other Animal “Pak” products, take one pack a day! Given the Nitrosigine inside, we suggest trying to take it pre-workout on training days to get the nitric oxide boost.

Be TNT with TNT+ 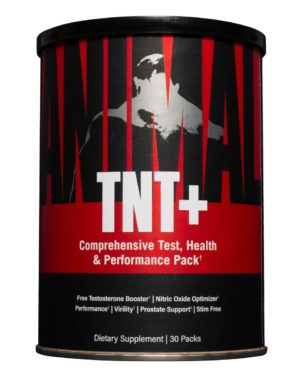 With the recent Alpha F release, the Animal team at Universal Nutrition was due to give the men an equally powerful hormonal support supplement. TNT+ is geared to give you a power load so that you can explode in the gym.

Natural testosterone boosters and the like require a lot of space and capsules, but the ingredients inside generally don’t taste the best. For decades, Animal Pak users have been conditioned for this, with plenty of capsules and tablets inside of those legendary paks. So with TNT+, it’s easy.

The added benefit of paks is that Animal can throw in some extra stuff that plain old test boosters don’t have room for, like a capsule of Nitrosigine to add some extra pump and blood flow to the game. That allows this to double as a stim-free pre-workout supplement, or one that will stack incredibly well with the new Animal Primal.

If looking for a well-rounded men’s supplement to add into Animal Pak and the rest of your daily regimen, TNT+ makes the choice easy. Dare we say… it’s dynamite.