Innovating BHB: NNB Nutrition and the Brains Behind Ketone Supplements

Throughout the past decade, a topic that’s been impossible to avoid in the world of nutrition is the keto diet. As its popularity has surged, its use has successfully rescued many dieters from metabolic distress and dysfunction.

Throughout this time, keto diet supplements have also gained popularity, led by exogenous ketone salts. These supplements provide users with a powerful alternative to carbohydrates, a new fuel source for the body. 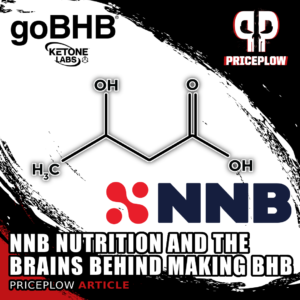 This article clears up the confusion in the keto diet supplement space. All along behind the scenes, NNB Nutrition has been innovating the BHB salt manufacturing process, and is the sole producer of goBHB, licensed by Axcess Global for their company Real Ketones

As with any new technology, the ketone supplement landscape has been confusing, even to industry insiders. There are numerous researchers, companies, brands, trademarks, and patents involved, and the industry is extremely fluid.

At the heart of it all, however, is one company that’s been manufacturing the vast majority of ketone ingredients: NNB Nutrition. Over the years, NNB has innovated their ketone supplement production process numerous times and are the sole manufacturer of the popular ingredients in goBHB.

This article serves to clear up the confusion in the keto supplement industry. We delve into the backstory of keto diets and keto supplements and describe NNB Nutrition’s innovative improvements. Finally, we discuss related patents and the popular goBHB trademark, which is actually owned by the company behind the brand Real Ketones.

Before we get started, though, be sure to sign up for our goBHB and NNB Nutrition news updates so that you can receive notifications when we cover new research on these fascinating ketone supplements:

Under normal circumstances in Western society, people following a high-carbohydrate “standard American diet” are largely dependent upon glucose for metabolic energy. This is especially true for the brain, which represents just ~2% of our body weight but consumes 20 to 25% of the body’s glucose-derived energy.[1,2]

Human diets weren’t always like this, and before the advent of modern agricultural practices, carbohydrates weren’t abundant year-round in most geographic areas. Without the easy availability of carbohydrates (or sometimes any food in general), the metabolism was forced to adapt to another energy source: fat (often the individual’s own body fat).

When “burning” body fat in a process known as beta-oxidation, the body generates an alternative energy source known as ketone bodies.[3] These energy sources can be used by every cell in the body to satisfy its energy needs — including the brain.[4]

Beta Oxidation of fatty acids leading to Ketogenesis, generating the three main ketone bodies (highlighted). D-BHB is the primary ketone made that the body can use as an energy substrate. We can add more D-BHB for various reasons, since this fat burning process is slower and you may wish to have some BHB available immediately for more energy.

There are three types of ketone bodies:

These molecules are primarily produced in the liver mitochondria[5] and used by the body in times of prolonged fasting, extreme exercise that depletes glycogen stores, and/or very low carbohydrate consumption.[6-8] This is known as entering a state of nutritional ketosis — and the fat that gets beta-oxidized into ketone bodies can either come from dietary sources or body fat.

The keto diet — short for ketogenic diet — takes advantage of this mechanism of generating ketone bodies from fat through extreme restriction of dietary carbohydrates (and often employing fasting). It exploded in popularity in the 2010s, and has been very successfully used for weight loss,[9-11] normalization of blood sugar and insulin,[12,13] improvements to metabolic and lipid markers,[14-16] improvements to liver disease,[17] and far more.[18-21]

For instance, a study published in 2008 showed that a phenomenal 95% of dieters with type 2 diabetes were able to reduce or discontinue their medication within six months of ketogenic dieting.[22] The famous two-year long Virta Health study produced similarly impressive results.[23-25]

Over time, ketogenic dieters have greater energy expenditure than their “sugar-burning” counterparts,[26,27] and the diet also reduces more visceral fat,[28] a type of body fat surrounding organs that is harmful in excess.

While this may have seemed like a “new” strategy circa year 2000, fasting and ketogenic diets have actually been practiced for millennia.[29] The diet was widely used in the 1920s for some medical conditions until it was suppressed in the 1970s.

Is it the elevation of ketones or the reduction of glucose and insulin? 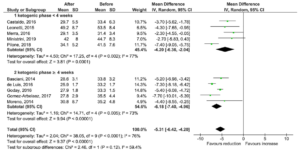 Very low carb and ketogenic diets have been phenomenal for the reduction of body mass index.[9]

A question that often arises is whether the ketogenic’s incredible successes are due to the therapeutic nature of ketones or the reduction of the damaging effects of hyperglycemia and hyperinsulinemia. The most likely answer is quite a bit of both.

So naturally, dieters and scientists began to wonder what would happen if we were to give more ketones to the body.

The Use of Exogenous Ketones

While the keto diet was gaining popularity in the 2010s, new categories of keto diet supplements were brought to the market. The most prominent of these involved using exogenous ketones to elevate blood ketone levels. These supplements generally employed various beta-hydroxybutyrate salts, with the BHB molecule bound to a mineral, such as sodium, calcium, magnesium, or potassium.

These exogenous ketones were generally marketed by supplement brands — some more responsibly than others — to support various functions:

MCT oil, made of medium-chain triglycerides, was also marketed for similar purposes. 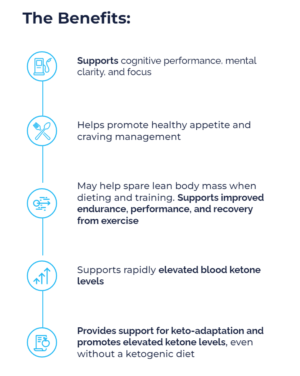 However, at the time, not all of the above claims were supported by scientific evidence in humans. With that said, many dieters could anecdotally feel incredible effects from the use of exogenous ketones.

Behind the scenes, researchers have been exploring the use of exogenous ketones in both humans and animals, and the effects are extraordinarily exciting.

Promisingly, exogenous ketones have been shown to be beneficial to both ketogenic dieters and higher-carbohydrate dieters. Although they were originally marketed to low-carb/keto dieters, we’re beginning to see that this was severely limiting their potential user base and use cases.

This is the starting point in the line of thinking that ketones can be used for greater athletic performance, especially for endurance. However, as we’ll see, research in non-athletic health outcomes is even more promising.

However, as we’ll see, not all ketone supplements are the same. The study cited above that utilized D-BHB gives us a hint, showing us where ketone technology is going.

This is where scientific innovation — coupled with NNB Nutrition’s manufacturing ingenuity — has taken exogenous ketone supplements to new heights.

While ketone research and supplement sales picked up steam over the past decade, there were two major business storylines happening behind the scenes:

Someone had to be producing the raw materials for these supplements, after all! And when you have a new ingredient you’d like to bring to market, who better to call than NNB Nutrition?

NNB Nutrition is the world’s premier novel dietary supplement ingredient developer and manufacturer. We’ve covered many of their ingredients over the years, which you can see on our NNB Nutrition news page. A few key ingredients are: 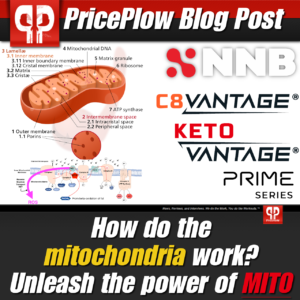 There are others like BioNMN, MitoPrime (L-ergothioneine), and RhodioPrime (high-salidroside Rhodiola extract). The prevailing trend is that NNB Nutrition is focused on applications for clean metabolic energy. Their strategies are discussed in our articles, The Power of “Mito”: Optimizing the Mitochondria to Unlock Clean Energy and The NNB Nutrition Story: Supplement Ingredient Solutions for the New Decade.

We’ve also discussed a program NNB calls “Ingredientology” — if you have a novel ingredient idea, they’ll work with you to bring it to life. That’s exactly what happened in the mid-2010s when researchers and scientists were looking for a better way to produce ketone supplements.

As the ketogenic diet was gaining popularity into 2015, researchers needed quality exogenous ketone supplements to test many of their theories. After approaching several manufacturers, it was clear that NNB Nutrition — led by industrial chemist Kylin Liao — was the company that could most reliably produce ketone salts that would remain shelf-stable and pass lab tests.

Most consumers don’t know this, but since then, NNB Nutrition has innovated and improved 10 versions of BHB salts. Although we can’t show every iteration (some are still yet to enter the market), the general timeline is:

There are other versions that can’t yet be shared, but when it comes to manufacturing ketones, NNB Nutrition has been the brains producing BHB behind the scenes.

goBHB: The premier name in ketones

goBHB is a registered trademark of Axcess Global

While NNB Nutrition originally named their ketones KetoVantage, they actually spent most of their time manufacturing the popular BHB supplement ingredient, goBHB. This is a name that nearly all keto dieters and supplement industry followers know, since it is the officially licensed name in BHB salts.

NNB made KetoVantage exclusive to goBHB, which is why you’ve likely heard of goBHB but not KetoVantage. In terms of manufacturing, however, it was NNB at work all this time.

Real ketones: The licensee of goBHB

The goBHB trademark is now licensed to a company named Axcess Global Sciences.[46] However, you may better recognize their subsidiary company, Real Ketones. Through Axcess Global, Real Ketones is the officially-licensed brand that sells goBHB supplements, with the BHB raw materials manufactured by NNB Nutrition.

Real Ketones has several products, most of which utilize D-BHB salts described above. A few of their key products are: 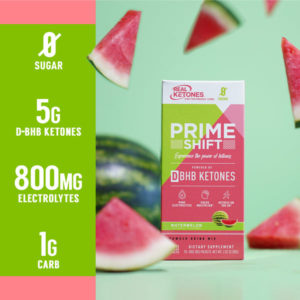 There are many other products — and research studies — that we hope to cover over time. Axcess Global has also patented (or licensed patents of) several innovations related to exogenous ketones and dieting, some of which were invented by famed researchers like Dominic D’Agostino and Patrick Arnold.[47-58]

To defend these innovations, Axcess Global is supporting more human-based research — and it’s not just for keto dieters — which we plan to cover over time.

Conclusion: The Future of BHB is Bright 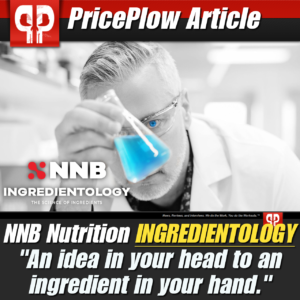 Even to industry insiders like ourselves, the ketone supplement landscape has been a bit confusing. This is to be expected with any new technology booming with new research every year. We hope this article helped clarify the backstory of these supplements while also illustrating their benefits.

As this decade continues on, we’re highly confident that new research will illuminate more benefits of D-BHB in humans — and they won’t just be for low-carb dieters.

We believe that many of the research trials that were performed using acidic (and gut-wrenching) ketone esters — or less-bioavailable racemic BHB salts — should also be reconsidered. Only this time, the researchers should use what we now know to be the superior form in goBHB D-BHB salts, in appropriate potassium/sodium ratios.

This is a fascinating area of research, and the products provide support for an exit from a world of metabolic distress caused by the industrialized food supply. Modern problems require modern solutions, and with ingredients like MitoBurn, GlucoVantage, and goBHB, NNB Nutrition is on the front lines of the fight for our metabolic lives. 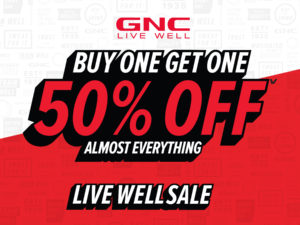 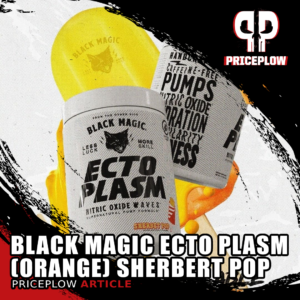